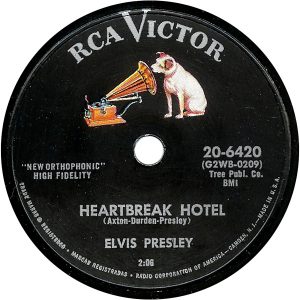 April 21, 1956: Elvis Presley had his first number one hit with “Heartbreak Hotel.”

Elvis had recorded the song on January 10, 1956 with his band, The Blue Moon Boys along with guitarist Chet Atkins and pianist Floyd Cramer. His new record label, RCA Records, released it as a single on January 27, 1956.

Rolling Stone magazine has an interesting article on the mystery surround the song and who inspired it. (see May 5)

April 21, 1960: Dick Clark testified before a congressional committee investigating payola. He admitted that he had a financial interest in 27 percent of the records he played on his show in a period of 28 months. (NYT abstract) (see May 19) 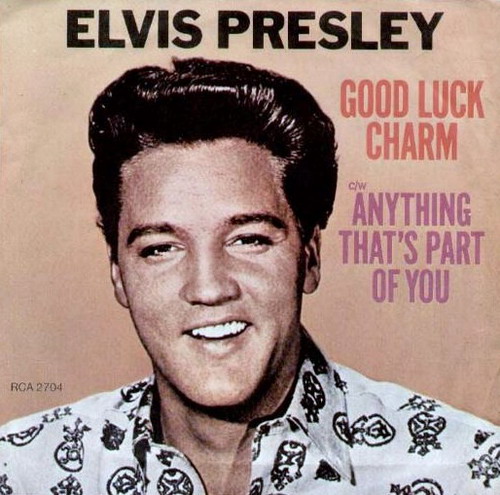 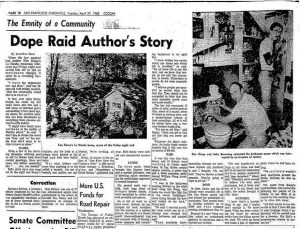 April 21, 1965: The Merry Pranksters got a tip that police had a warrant would raid their La Honda (California) camp.

From Tom Wolfe’s Electric Kool Aid Acid Test: By now the Pranksters had built up so much momentum they begin to feel immune even to a very obvious danger, namely, the cops. The citizens of La Honda were becoming more and more exercised about Kesey and the Pranksters, and so were the San Mateo County sheriff and federal narcotics officials. Not knowing what the hell accounted for the crazy life at Kesey’s place, they apparently assumed there was some hard drug use going on—heroin, cocaine, morphine. Late in 1964 they put Kesey’s place under surveillance. The Pranksters knew about it and used to play games with the cops. The main federal narcotics agent in the area was a San Francisco Chinese, Agent William Wong. The Pranksters made a huge sign and put it up on the house: WE’RE CLEAN, WILLIE! It was fun, the cop game. The cops would be out in the woods at night, along the creek, and one of them would step into the creek and get his feet wet and say something. The Pranksters would pick all this up on the remote mikes in the woods, whereupon the voice of Mountain Girl, broadcasting from inside the cabin, would jeer out over an amplifier up in the redwoods: “Hey! Why don’t you come in the house and dry off your feet, you cops! Quit playing the cop game and come in and git some nice hot coffee!” The cops were just playing their eternal cop game. That’s all it seemed like to the Pranksters. (see April 23)