Another anniversary of its US Billboard #1 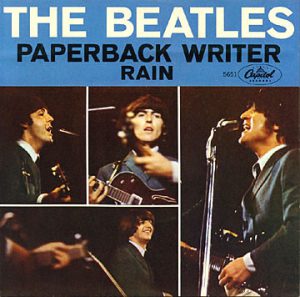 It was 1966 and some music had turned the corner. Some music. Frank Sinatra had his strangers and daughter Nancy her boots. The Monkees were believers and Tommy James was hanky panky.

The Beatles had released Rubber Soul in 1965 and its songs changed the course of pop musical history. For those who followed the Beatles, like the Pied Piper with the children of Hamlin, Rubber Soul’s direction led to new possibilities.

Not a Love Song

Whether someone actually challenged Paul to write a song that wasn’t a love song and whether Paul saw Ringo reading a paperback at the same time is part of distant misty history. Whatever the inspiration or prompt, “Paperback Writer” is not a love song. It is a (very) short story.

The lyrics are a letter by someone hoping to change their life.  He is unemployed and has been writing for years and will write more if “you like the style.”

The song has a boosted bass. John wanted that. John liked the idea. He wondered why the bass wasn’t more pronounced in earlier work.

As Paul sings about wanting to be a paperback writer, the others chant along with the same phrase. Or do they? They certainly do at the end, but what about during the song?

It is those playful Beatles singing the words Frère Jacques. Hilarious.

As always, Allan W Pollack’s site does a far better job of delineating the song:

You said it Allan!