“Another Man” from the Blues Breakers with Eric Clapton (1966) 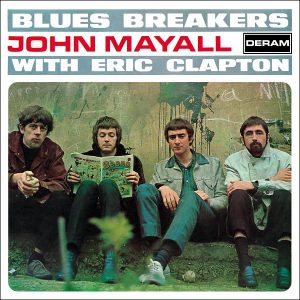 As with so many young British musicians in the 1960s, American blues attracted their attention. The Rolling Stones, the Animals, and perhaps most notably, John Mayall.

Not the new kid on the block

Older than most of the “kids” moving up the musical chops lists, John had already lived a bit after leaving school. He brought his love of the blues with him while in the British National Service even in Korea.

His father’s 78 records of jazz and blues were Mayall’s introduction to the genres. The piano, then the guitar, then the harmonica became obsessions, but he was mostly alone in his love of such stuff.

In 1962 Alexis Korner and Cyril Davies had founded the Ealing Club, which featured performances by their band, Blues Incorporated, and other similar bands. The club attracted young blues enthusiasts such as Mick Jagger and Eric Burdon.

Earning a living and playing the blues are not a lucrative combination, but in 1963 with the Ealing Club providing a venue, Mayall quit his job as a clerk and started playing full time.

In 1965, Decca released a live album: John Mayall Plays John Mayall, a title that is surprisingly apt as nine of the 12 songs are Mayall’s. Surprisingly, because, Mayall, as did most of those early British blues bands, typically covered American blues songs.

The Yardbirds were another British band that the blues had inspired and one of its guitarists, Eric Clapton, decided he wanted even more than the band did. John Mayall offered Clapton a spot in the Blues Breakers and on July 22, 1966, Mayall’s second album was released.

Mayall had hoped to again record a live album, but the quality wasn’t good and the band went into the studio. Though Clapton’s live guitar playing was what Mayall wanted, the studio Clapton was no slouch and scorches the songs.

You will notice that most of this album’s songs are covers. Doesn’t make any difference. The whole album’s greatness shines through with every cut.