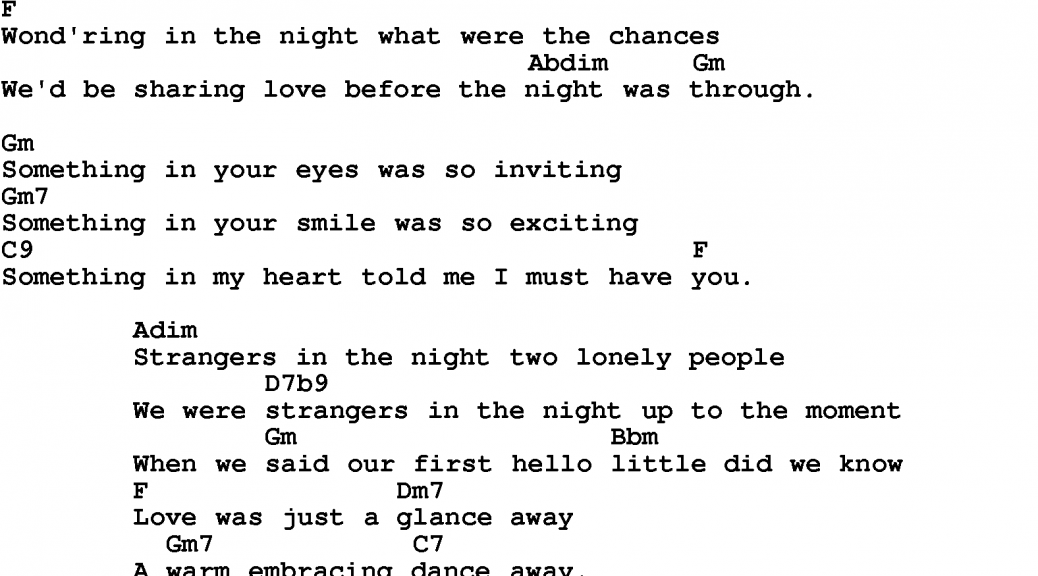 “Strangers in the Night” by Bert Kaempfert

1965 had been a tipping point for American popular music. Bob Dylan wasn’t working with Maggie no more. The Beatles had a rubber soul. Brian Wilson knew that God only knows.

Of course there were the Beatles, but there were also the Monkees. The Rolling Stones, but Petula Clark. The Troggs, but Tommy James, too. Percy Sledge’s “When a Man Loves a Woman”, but SSgt Barry Sadler’s “Ballad of the Green Berets.”

The Sinatras were there, too. Not quite the psychedelics we expected. Nancy had her #1 hit with the famous “These Boots Are Made for Walking” (didn’t we young hormonal teenager boys love to watch her sing that. Something in my heart…

But it was father Frank’s song that we’d listen to with our girlfriends on our transistor radios. “Something in my heart told me I must have you.”

The song’s origins are disputed. The melody is commonly attributed to Bert Kaempfert (he who recorded Tony Sheridan with the Beat Boys backing Sheridan. The Beat Boys were, of course, the Beatles), but cigar maker and jazz musician Avo Uvezian had stated that he originally composed the song for Frank Sinatra.

According to Uvezian, his song, originally called “Broken Guitar”, had different lyrics.

Sinatra didn’t like the lyric, studio composers created new lyrics, changed the title to “Strangers In the Night.” Sinatra reportedly hated the song, but with a #1 hit long behind him, He recorded it. The rest is disputed history.