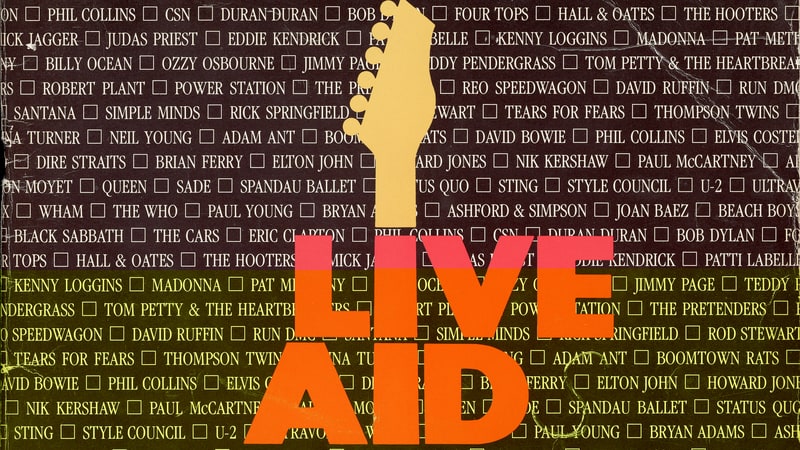 The best known philanthropic rock concert was George Harrison and Ravi Shankar’s Concert for Bangladesh in 1971. It wasn’t the first though. Likely that honor belongs to the 1967 Fantasy Fair and Magic Mountain Music Festival. That event was also the first rock festival.

Ethiopia, like other African countries, suffered from political and military corruption and abuse. The abuse resulted in civil uprisings and presented an opportunity to outside infiltration.

In the mid-1980s record low rainfalls added to the intense suffering of a mainly agrarian population, particularly in the northern area of the country.

The country’s own internal disorder hindered international relief group efforts to assist. Over one million people died in 1984.

In October 1984 a BBC news crew with Michael Buerk was the first to document the famine The report motivated British viewers to bring world attention to the crisis in Ethiopia.

Do They Know It’s Christmas

Irish musician Bob Geldof organised a supergroup and named it Band Aid.  Released for Christmas, their single, “Do They Know It’s Christmas?” became the biggest selling single in British history.

The following March, an American  coalition of musicians released “We Are the World.”  Michael Jackson and Lionel Richie wrote the song. The musicians called themselves the United Support of Artists (USA). Quincy Jones produced the song and the album.

On the financially successful heels of the British and American releases, and Midge Ure organized Live Aid. Boy George had suggested the idea following a December concert of his that closed with “Do They Know Its Christmas.”

The viewed concert was over 16 hours long, but the total time of the music was more as the two sites sometimes overlapped.

Viewers saw on screen messages and heard organizers ask for donations. Geldolf famously said “fuck the address” when a moderator wanted to give the address to send money to as opposed to giving the phone number to immediately give money with a credit card.

Over 1.5 billion people watched the shows and it is estimated that the concerts raised around $160 million. (see NYT article)

Dozens of artists participated. Below is Eric Clapton and Phil Collins doing “Layla.”

Rolling Stone’s description began, “It was superstar heaven. Keith Richards was laughing and talking with Jimmy Page. A bodyguard handed Bob Dylan a beer. Across the room Jack Nicholson and Neil Young chatted. Andy Taylor, guitarist for Duran Duran and the Power Station, took a hit off a joint and screamed out, “Don,” then gave ‘Miami Vice’ star Don Johnson a hug. “We gonna get high!”