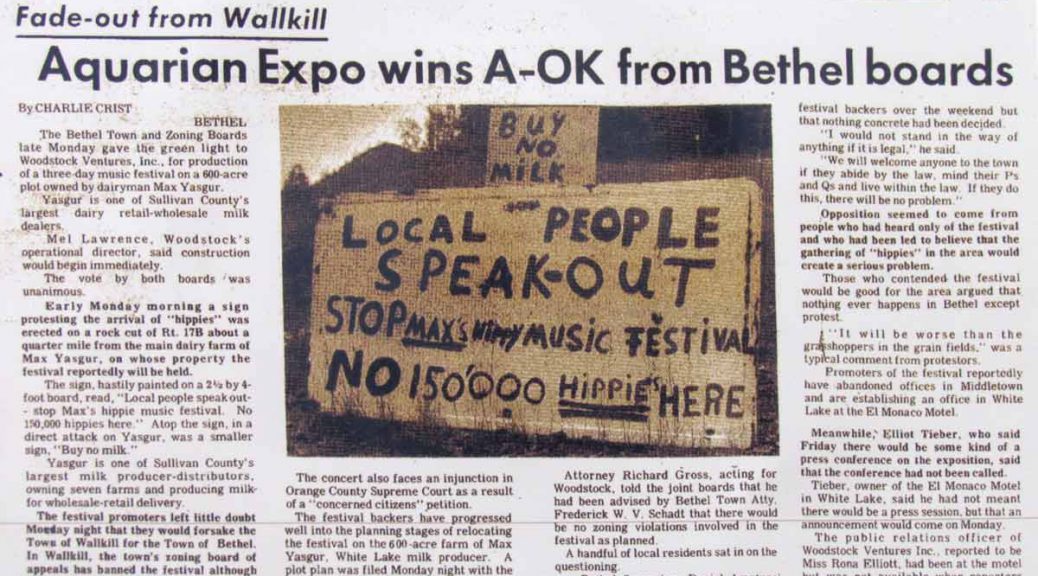 One of the most common questions guests ask when visiting Bethel Woods Center for the Arts is, “Why do they call it Woodstock?”

The question never asked is, “What happened in Wallkill?”

Here’s what was happening in July 1969 while Woodstock Ventures, the partnership that created the Woodstock Music and Art Fair, continued to prepare the Wallkill, NY site for the August festival.

On  July 14, 1969, Woodstock Ventures had again met with Wallkill town officials and presented its revised application for the festival. Wallkill had instituted new ordinances and Woodstock Ventures felt it had done what was necessary to meet those demands.

The next day, in a closed session at the town hall, the Wallkill Zoning Board of Appeals passed judgment on the status of Woodstock Venture’s application for a permit. The five-member board refused to allow the festival to build anything on the 200-acre site.

July 16: officials posted  an eviction notice on the front door of Howard Mill’s barn (one of the organizing locations for the festival) The notice told Woodstock Ventures to vacate the premises. To this point Woodstock Ventures had sold approximately 150,000 tickets for each day and had spent $500,000 on the concert. Woodstock Ventures went to court.

The move to Bethel, New York is a bit shrouded in a Sullivan County early morning fog. That is not surprising. No one followed Michael Lang, Artie Kornfeld, Joel Rosenman, or John Roberts around with a tape recorder or notepad to document every word for posterity. No one knew that posterity would be interested.

That same day (July 16) Mel Lawrence (Director of Operations) and Michael Lang took a helicopter over nearby areas looking for a concert new location.

While they were gone, Elliott Tieber apparently contacted Woodstock Ventures about a place in Bethel, NY, 30 miles away. Tieber’s family ran the El Monaco Motel at the intersection of Rts 17B and 55.

Upon investigation, the site was completely unsuitable. Tieber (perhaps, perhaps not) set up a meeting with Max Yasgur.

Max and men on the moon

July 17: although not particularly interested, Max Yasgur agreed to meet with Woodstock Ventures. Area media had covered the festival’s troubles in Wallkill and Yasgur knew all about the Wallkill eviction.

July 18: in the morning before the Yasgur meeting, Michael Lang and Ticia Bernuth (production assistant) explored the Bethel area. They saw an area they thought suitable.

The first site Yasgur offered did not please Lang. Yasgur offered another site, a field he owned about a mile away. It was the same site Lang and Bernuth had seen that morning. Yasgur and Lang made an agreement.

July 20: someone nailed a sign to tree at driveway entrance. 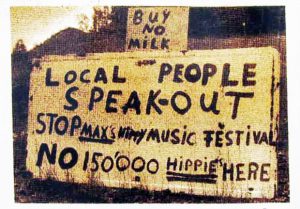 July 21: Judge Edward O’Gorman handed down a decision. It banned the festival from the Wallkill site. That evening, the Bethel Council unanimously voted to grant permission to Woodstock Ventures to hold the festival. 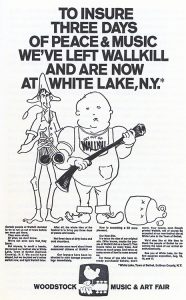 July 24: the Bethel Supervisor reported that he’d received about twenty phone calls from residents opposed to festival, but no legal threats.

July 26: Wes Pomeroy, the Chief of Security, began interviewing NYC police. He explained that those selected will not be in uniform, will carry no weapons, and will not hassle attendees about drug use, dress, or language.

That same day a local petition circulated to ban the festival.

Yasgur continued to support his decision and made the following statement: “I hear you are considering changing the zoning law to prevent the festival. I hear you don’t like the look of the kids who are working at the site. I hear you don’t like their lifestyle. I hear you don’t like they are against the war and that they say so very loudly. . . I don’t particularly like the looks of some of those kids either. I don’t particularly like their lifestyle, especially the drugs and free love. And I don’t like what some of them are saying about our government. However, if I know my American history, tens of thousands of Americans in uniform gave their lives in war after war just so those kids would have the freedom to do exactly what they are doing. That’s what this country is all about and I am not going to let you throw them out of our town just because you don’t like their dress or their hair or the way they live or what they believe. This is America and they are going to have their festival.”