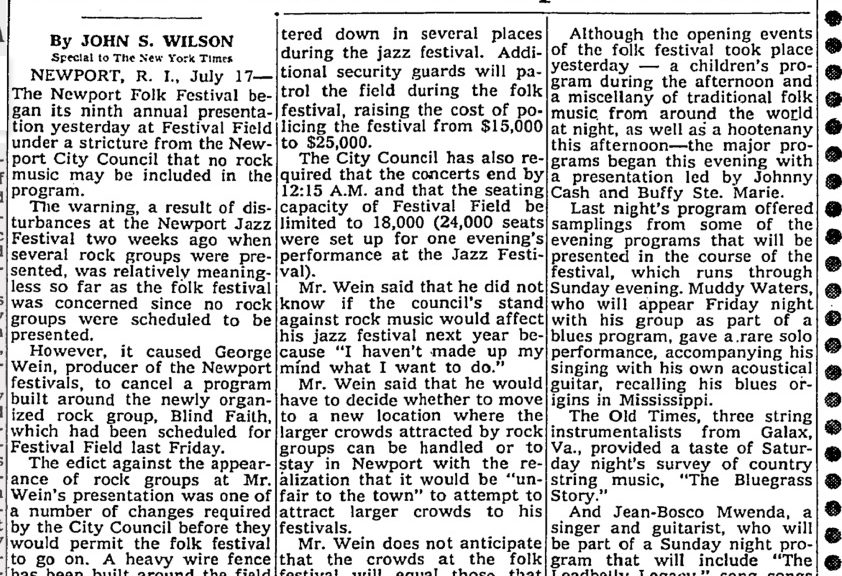 The 1969 Newport Folk Festival is the 24th festival I have blogged about for that famous season. I am including a folk festival in what is mainly a rock festival list because the lines between the two genres had blurred.

Remember that day one of the Woodstock Music and Art Fair began mainly with folk. The 1969 Newport Jazz Festival, less than two weeks earlier, had included many rock acts in its line up. Promoters had seen the writing on the wall: many young people’s tastes had expanded from rock to folk, from folk to rock, from rock to jazz and from jazz to rock. Including a diversity of music attracted more guests and these festivals were business ventures. More guests equaled more revenue.

As a result, the Newport City Council instituted a “no rock” rule on the folk festival. A heavy wire fence replaced the former smaller wooden one.  Fewer seats. More security. Earlier curfew.

Despite the locals’ attempt to tame the scene, singers sang of the times. Johnny Cash sang against the Vietnam war; Buffy St-Marie sang about Native American mistreatment; Len Chandler of civil rights; and there was even an anti-interstate highway construction song by Ed Wheeler named “The Interstate is Coming Through My Outhouse.”

YouTube doesn’t seem to have Wheeler’s version, but here’s one by Leroy Pullins.

It’s always nice to find a first hand account of an event. Known academically as a primary source, it gives us a better feel for an event than stories written after the event.

Richard Williams attended the 1969 Newport Folk Festival and wrote his impressions about it, particularly the last night on a Facebook comment. Among his observations were hearing an unknown James Taylor participate in a song workshop after which promoters invited Taylor onto the main stage, a rare honor.

On that last night Williams remembers the announcement of Neil Armstrong’s historic steps onto the Moon and leaving the festival while listening to Joan Baez singing “Throw Out the Lifeline” a capella.

That song also is not on YouTube, but here is an Ella Fitzgerald cover of the old spiritual.

Throw Out the Lifeline

A New York Times article headline referred to the 1969 festival as a “music bazaar” and Rolling Stone magazine’s closing paragraph on the festival read: It was the same old shuck. What will happen next year? Who knows but Mr. [organizer George] Wein who closed the Festival by saying: “During the last 16 summers of the Newport Festivals, it’s been the kids who’ve supported us. We’re still concerned with the kids. God Bless You.”