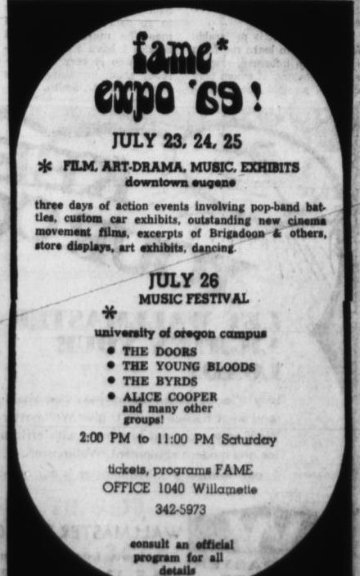 Unfortunately, the event did not go as planned and several scheduled acts,  including The Byrds and The Youngbloods, didnot perform.

The Doors arrived only minutes before taking the stage and played an extended set (70 minutes instead of 45 minutes) to make up for the missing bands.

As you will be able to read from the newspaper articles below, the announcement that the Byrds and Youngbloods, two of the biggest names on the bill,  drew an angry reaction from many in the crowd some of whom demanded their money back.

Boyd Grafmyre promoted the event. He was becoming one of the biggest names in rock music production in the northwest. 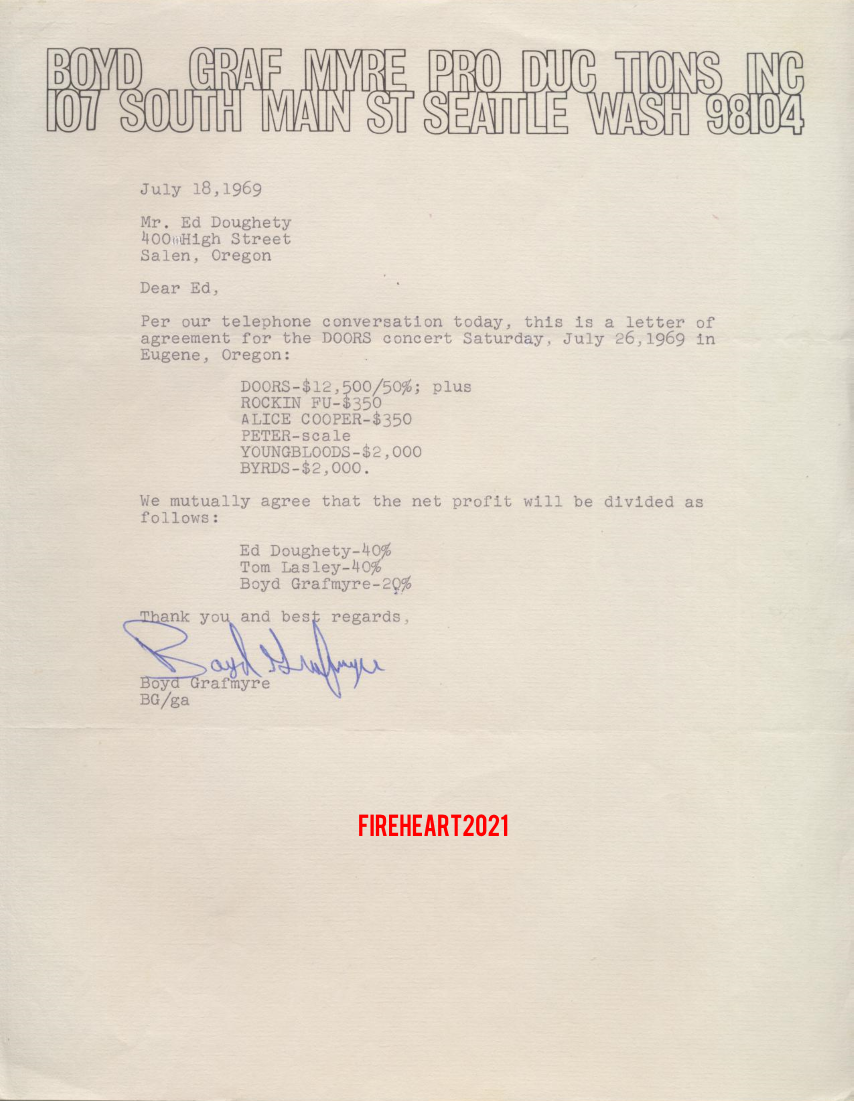 Here is his obituary from the Seattle-Times dated December 13, 2019If you saw some of the biggest bands perform in Seattle back in the ’60s  — The Doors, Led Zeppelin or Jimi Hendrix at the Eagles Auditorium, or the Seattle Pop Festival in Woodinville — you can thank Boyd Grafmyre.

“He really was responsible for bringing the music scene to Seattle in the late 1960s,” said Joseph “Lightnin’ Joe” Meyering, a musician and the owner of the JAM PRO NW recording studio in Port Townsend. “It was all him, or those bands probably wouldn’t have made it up here. Boyd got those acts to Seattle.”

Mr. Grafmyre, who was still dreaming of producing the next big act, died Monday, Dec. 9, in Port Townsend. He was 79.

“He would always tell me, ‘I have this deal, it’s going to work, it’s going to happen next month,’ ” remembered his son, Damien. “Sometimes I think he was living for what he had.

“But he had a creative mind, and he had an ear for music. He knew what was good, and what was not good.”

Born in Bellingham and raised in Seattle, Mr. Grafmyre graduated from Queen Anne High School and had dreams of becoming an actor. At 19, he moved to Los Angeles and studied at the Pasadena Playhouse, then went to New York for a spell before he returned to Seattle. He was drafted and spent six months as a reservist in the civil affairs unit of the Army.

He spent a year at Seattle Repertory Theatre, where he met his future wife, Jana Thurner. They had two sons, Dylan, now 51, and Damien, 48. The couple later divorced.

In 1963, Mr. Grafmyre was asked to be the tour manager for a combination gospel and pantomime show. One day, he pulled the bus over next to a cornfield and watched the performers stream out and dance around in the stalks.

“I took one look and decided I was through with actors and that kind of temperament,” he told The Seattle Times in 1969. He returned to Seattle and joined a promotional agency called Trips-Lansing that was putting on a festival at the Eagles Auditorium at Seventh Avenue and Union Street, where the ACT Theatre now operates.

Mr. Grafmyre saw the crowds, rented the space on his own and started booking talent for weekend shows — but he barely broke even. That problem was solved in the spring of 1967, when he booked The Doors — the band had just released “Light My Fire” — and had to turn away 4,000 people.

Other acts followed: Steve Miller, Eric Clapton, Led Zeppelin, who famously stayed at the Edgewater Hotel during their booking at the Green Lake Aqua Theater. Joe Cocker said he gave one of his best performances at the Eagles Auditorium, which Mr. Grafmyre took pains to ensure had good acoustics, sound system and lights.

In 1969, Mr. Grafmyre booked a property in Woodinville for the three-day Seattle Pop Festival, which drew more than 50,000 people to see artists such as Chuck Berry, Santana, the Byrds, Ike & Tina Turner, Ten Years After and The Doors.

Damien Grafmyre and his brother were raised in Hawaii after their mother remarried, to a minister. (“I have a rock ‘n’ roll father and a minister father,” he said).

Despite the distance and their father’s musical aspirations, they were connected.

“He never mistreated us and always loved us,” Damien Grafmyre said. “He wasn’t there, physically. His lifestyle was music, and that’s probably why he and my mom got divorced. But he was always a loving person.”

Mr. Grafmyre was still hoping to get back into the music business, “but I don’t think he knew how to do it,” his son said.

Mr. Grafmyre spent the last years of his life in a small apartment in Port Townsend, where he walked four miles a day, greeting everyone in his path.

Two years ago, Mr. Grafmyre was diagnosed with throat cancer, which was treated, but recently affected his ability to swallow. He went to the hospital for tests and went into cardiac arrest. He never regained consciousness.

In the days before he died, Mr. Grafmyre’s family sat in his room, talking and playing the music of Led Zeppelin, Neil Diamond and Hendrix. Meyering came in and played his harmonica.

Meyering’s fondest memories of Mr. Grafmyer are seeing him sitting with his feet hanging out the window of his top-floor place, looking out at the water, a glass of wine in one hand, the other waving hello.

“It was always good to see him,” Meyering said. “Boyd always had good energy and a smile. And he was always working on the next big thing, the next big artist he was thinking about promoting.”

Mr. Grafmyre is survived by his sons and three grandchildren: Jacob, Sebastian and Rose Elane.

No services are planned. Mr. Grafmyre will be cremated and his ashes spread in places he loved: Port Townsend, Bainbridge Island and in Seattle, where his mother and sister were laid to rest.

The next 1969 festival is the Seattle Pop Festival.