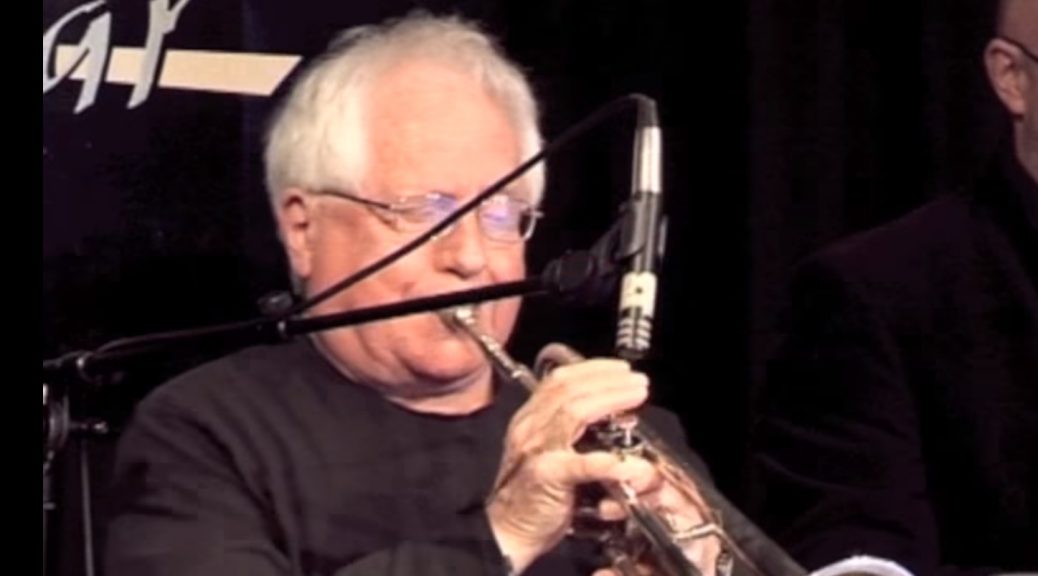 Thomas Henry Lowther was born in Leicester, England. “As a child Lowther learned trumpet from his father and took private violin lessons before going on to study with Manoug Parakian at London’s Royal Academy of Music.” (from All Music).

It has been a lifetime of music since then.

According to a 2019 Hastings Observer article, “He became interested in jazz and, inspired by a Sonny Rollins recording, he returned to brass playing and took up the trumpet. In the 1960s, he split his time between jazz and the rock scene. For instance he first played with the John Dankworth Orchestra in 1967, beginning a relationship that would last for 45 years. But he also played with bands like Manfred Mann, John Mayall’s Bluesbreakers and the Cream bassist Jack Bruce.”

Then the Keef Hartley band and Woodstock

Of Woodstock he said, ““You know I played Woodstock as the first gig of an American tour with the Keef Hartley band. The only other trumpet player at the gig was Sly Stone’s sister!”  (Jazz Wise magazine)

Since John Till and Louis Gasca with Janis, Steve Madaia and Keith Johnson with Paul Butterfield, and Chuck Winfield and Lew Soloff with Blood, Sweat and Tears played trumpet as well but we’ll just attribute Lowther’s error to that famous Woodstock Haze.

From  the Vortex Jazz site: During the sixties Henry was one of the first musicians on the British jazz scene to experiment with total free improvisation, notably with Jack Bruce, Lyn Dobson and John Hiseman. He played with the original and seminal Mike Westbrook band (which included Mike Osborne and John Surman), and also with John Dankworth, including playing on the now legendary and rare Kenny Wheeler album “Windmill Tilter” while also working on occasions on the rock scene with musicians such as Manfred Mann, John Mayall and  Keef Hartley, with whom he appeared at the famous Woodstock festival in 1969.

Here is his All Music list of credits. You’re going to be there awhile!

After Lowther left Keef Hartley in 1970, he worked with dozens of different musicians including Bryan Ferry, Van Morrison, and did the trumpet solo for Elton John on “Return to Paradise” in 1978.

From his own site

In 1996, along with his great friend the great bass player Dave Green, Henry formed his own band Still Waters to enable him to pursue his increasing interest in composition. In 1997 Still Waters recorded an album, “ID”, on the Village Life label, to much critical acclaim

Of it, the Financial Times said, “The sturdy theme and somnolent harmonies of the opening title track have trace elements of a works’ brass band. But the melody has a quizzical edge, and elliptic splatters of percussion lie underneath. As the piece evolves, the trumpeter’s brassy certainty is interrupted by drummer Paul Clarvis’s off-kilter breaks. Can’t Believe, Won’t Believe is dedicated to cynics everywhere. As the album progresses, Lowther’s modern jazz quintet embroiders the trumpeter’s elegant and knowing compositions with unruffled emotions and filigree detail. Pete Hurt is a wispy-toned tenor sax foil to Lowther’s precise turn of phrase, and pianist Barry Green’s haunting impressionist voicings are underpinned by Dave Green’s pitch-perfect counterpoint bass.”