Johnny Gentile and His Group 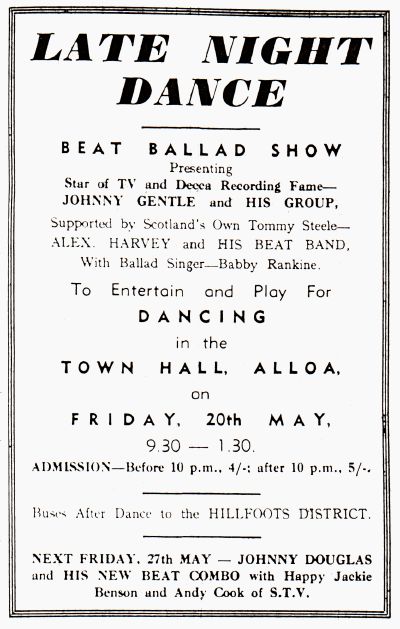 May 20, 1960: the Silver Beetles (John Lennon, Paul McCartney, George Harrison, Stu Sutcliffe, and Tommy Moore) played the first night of a short tour of Scotland backing singer Johnny Gentle, at Alloa Town Hall in Clackmannanshire. They were never billed as The Silver Beetles on the tour; all posters gave the billing as “Johnny Gentle and his group”. Paul McCartney later wrote:

“Now we were truly professional, we could do something we had been toying with for a long time, which was to change our names to real showbiz names. I became Paul Ramon, which I thought was suitably exotic. I remember the Scottish girls saying, ‘Is that his real name? That’s great.’ It’s French, Ramon. Ra-mon, that’s how you pronounce it. Stuart became Stuart de Staël after the painter. George became Carl Harrison after Carl Perkins (our big idol, who had written ‘Blue Suede Shoes’). John was Long John. People have since said, ‘Ah, John didn’t change his name, that was very suave.’ Let me tell you: he was Long John. There was none of that ‘he didn’t change his name’: we all changed our names.

So here we were, suddenly with the first of Larry’s untempestuous acts and a tour of Scotland, when I should have been doing my GCE exams. A lot of my parents’ hopes were going up the spout because I was off with these naughty boys who weren’t doing GCEs at all.” (see June 11)

May 20, 1967: advanced copies of Sgt Pepper’s are sent to the B.B.C. radio service. It decides to ban “A Day In the Life” from broadcast because it contained drug inducement themes in the song. The song’s style was influenced by Karlheinz Stockhausen’s Gesang der Jünglinge. [Stockhausen site] (see June 1)

May 20, 1969: Michael Lang found separate office space at 513-A Avenue of the Americas in NYC so he could be away from the other organizers. (see Road for expanded story)