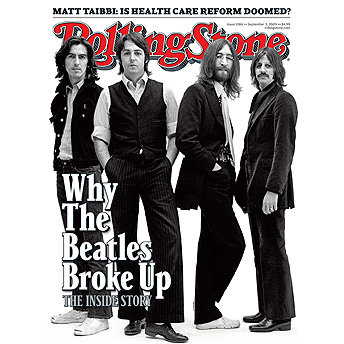 It was 1970. We American Boomers had watched them on Ed Sullivan  six years earlier.  Six years during which we witnessed  assassinations, wars, a cultural revolution,  fear, and loathing,

Many of us had literally grown up with the Beatles. We went from  innocent early teenage years to the brink of adulthood and its disruptive realities.

The Beatles had stopped touring in 1966. Getting to see them live was always too difficult anyway, so the fact that they weren’t appearing live wasn’t that  big a deal. We would always have their newest vinyl.

The Beatles–in 1968–but we were such good friends by then we all simply call it their “White” album.

Yellow Submarine and Abby Road in 1969, though there were rumors of another album already recorded.

We also had rumblings…

Ringo had briefly quit the Beatles in August 1968 and George had done the same in January 1969.

On January 30, 1969 they played on the roof of their Apple Building in London as part of their movie Get Back. Not knowing it, the impromptu live performance was their last.

On August 22, 1969, photographer Ethan Russell shot the final photos of the the four together.

On September 20, 1969, John Lennon told the others that he was leaving the band, but agreed to keep it quiet until albums were released and the time was right.

April 10, 1970, Paul McCartney made the Beatles’ secret breakup public by issuing a press release to announce that he had left the group, done in the form of a fake interview:

“Q: Is your break with the Beatles temporary or permanent, due to personal differences or musical ones?

John Lennon was furious, especially since Paul announced the breakup, already agreed upon by the group, just one week prior to the British release of McCartney’s first solo album. When a reporter tracked down Lennon for his thoughts, he replied, “Paul hasn’t left. I sacked him.“

While the lives of John Lennon, Paul McCartney, Ringo Starr, and George Harrison occasionally crossed after 1970, the crossings were sometimes cordial, sometimes not.

Life without a Beatles album went on punctuated regularly by many solo offerings.

Whatever happened to the life that we once knew
Can we really live without each other?
Where did we lose the touch
That seemed to mean so much
It’s always made me feel so

You will notice that I haven’t said that “Yoko broke up the Beatles” –the oft sung sad shibboleth. That is because she did not break up the Beatles, but that’s another story for another time.

And the final final legal legal breakup was still nearly five years away.