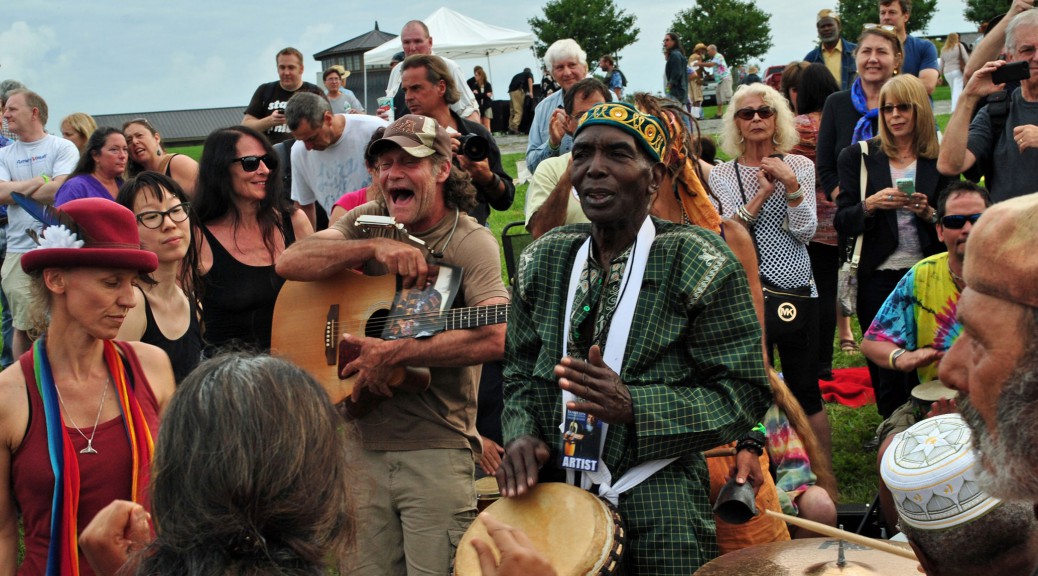 Birthday greetings and kudos to Juma Sultan for his presence in our musical history and his dedication to preserving it. 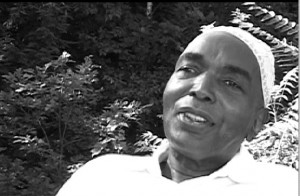 Audio is from the drum circle on the Woodstock Music and Art Fair’s field after Richie Haven’s memorial celebration at Bethel Woods Center for the Arts. August 15, 2013.

Juma Sultan is a musician’s musician. By that I mean that the typical listener and music lover might not know the name or know who Juma is associated with, but he has had a great impact on other musicians. That association is with Jimi Hendrix and being in Gypsy Sun and Rainbows at the Woodstock Music and Art Fair.

He is a percussionist whose career spans more than 50 years. Its best known point may have been with Jimi Hendrix, but his importance today is with his video and audio preservation  of loft jazz during the 1960s and 1970s.

The following video is an interview with Juma Sultan about many things, but he discusses the Woodstock Music and Art Fair and his memories about the event as part of Jimi Hendrix’s Gypsy Sun and Rainbows. Slide up to the 8 minute part of the video for the Woodstock comments.

And according to the Underground Producers Society, “In 1972, Juma formed the New York Musicians Organization (“NYMO”) which organized concerts to protest unfair programming at the Newport Jazz Festival, and also started Studio We, with friend James DuBois, which became an integral part of the Loft Jazz scene – giving musicians a place to perform and develop.”

According to Wikipedia, “Loft jazz was a continuation of the free jazz and avant-garde jazz traditions inaugurated by John Coltrane, Ornette Coleman, Albert Ayler, Pharoah Sanders, and Sun Ra. However, it didn’t follow any one particular style or idiom of jazz. Few loft jazz musicians played continuously atonal or arhythmic music in the style of Coltrane’s legendary albums Ascension and Om. They often combined conventional melodic elements with free jazz; used instruments less familiar to jazz, such as the bass saxophone, oboe and cello; and combined instruments in untraditional formats, like the World Saxophone Quartet, whose changing members used a variety of saxophones and flutes, usually without any rhythm section.” 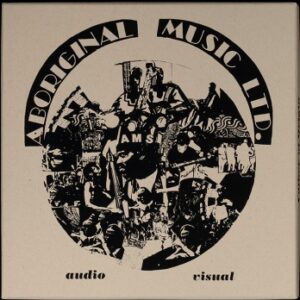 Juma Sultan was there and part of recording it. In 2006 he received a grant from the National Endowment for the Arts to preserve those rare and invaluable recordings.

From the Porter Records site: While musicians recording their own music is not uncommon, it would be hard to imagine anyone matching the recording tenacity of Juma Sultan, who has recorded thousands of hours of material from the late 1960’s through the 1970’s.  And not recordings of any old song but material that is historically important in regards to the evolution of (for the lack of better word) “Jazz”.  What we have here now is a collection of handpicked tracks from the vast collection of Juma Sultan and in particular is his Aboriginal Music Society, comprised of like-minded musicians. The dates and personnel vary from track to track as the Aboriginal Music Society was consistently evolving as musicians came and went over the years. This ever changing line-up lead to a diversity of emotions that let the band explore a multitude of styles that included elements of, African music, jazz, spiritual-jazz, free-jazz and even soul music.  Fortunately, some thirty years after the music was recorded, it is now reaching an eager and appreciative audience.”

From the Juma’s archive site: Juma began recording in the 1960′s and continued this work for over twenty years. Here you will find samples from recordings of rehearsals and concert dates from 1968 through 1974. 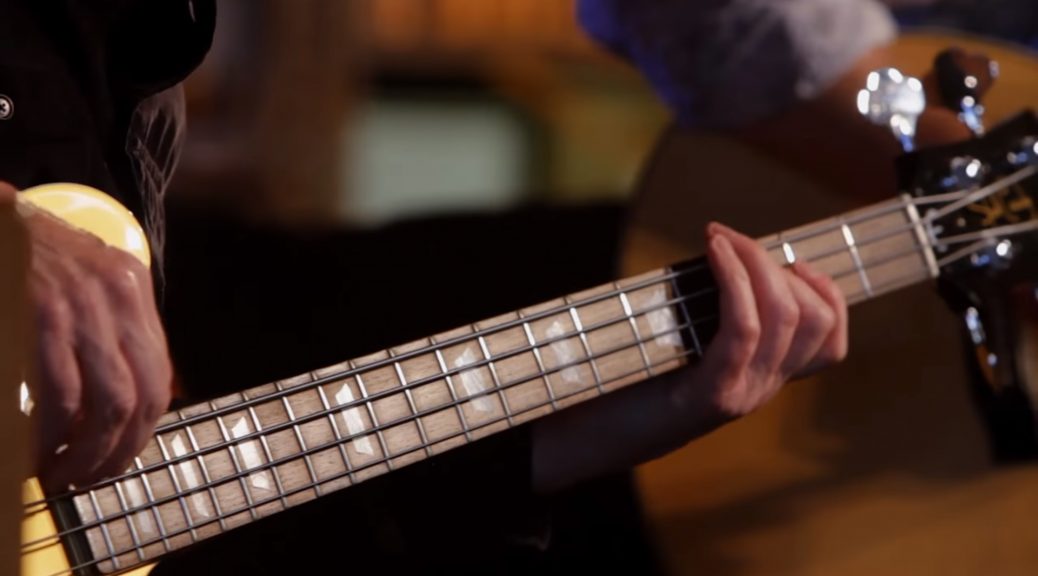 Jack Casady grew up in Washington, DC. He found an old guitar in his parents’ attic.  Jack was 12. The guitar had four stings. For Christmas, his parents gave him a certificate to take guitar lessons.

Jack used money from part-time neighborhood jobs to buy his first electric guitar, a ’58 Fender Telecaster, He and his dad built an amp from a kit.

His brother Chick’s high school friend visited one afternoon. The brother’s friend was Jorma Kaukonen. The two boys quickly realized that they shared a love of blues and records (echoes the story of Bob “The Bear” Hite and Alan “Owl” Wilson). They briefly formed The Triumphs.

Kaukonen left for Antioch College (Ohio) and Jack continued playing local gigs. One gig needed a bassist. Jack filled in and realized he loved the instrument.

1964 and Beatlemania struck and left blues-oriented bassists on the sidelines.

Jorma left Antioch. He was out in San Francisco and had joined a band. Jefferson Airplane. Jorma heard Jack played bass he told Jack that the Airplane needed a bassist. Jack laughed at the name, but flew out to San Francisco.

Jorma picked up Jack at the airport in his Sunbeam convertible. Jorma worriedly greeting Jack with a, “You better be able to play.” 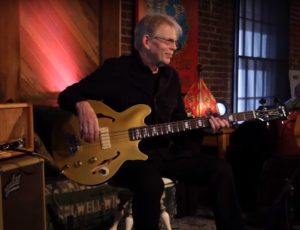 October 1965. According to Casady, “What was great for me was the opportunity of coming to San Francisco in that environment in the mid ’60s where you had a tremendous number of middle class white kids trying desperately to do anything their parents didn’t. And all these kids were suddenly out there playing instruments, making up songs. And that whole coming together aspect created some different music, most of it not keeping up to professional polish of other areas of the country, but still, people wanted to make their own statement. And so I found myself in this band that I thought was the craziest band I had ever seen.”

The Airplane became one one of the hallmark bands of the era and whose story is too long to include here. Suffice to say, the music of that time would not be the same without them. From a personal viewpoint, their Woodstock performance was one of highlights of my long concert-attending life.

While touring, Jack and Jorma were often roommates and between gigs, in a motel room with a broken-TV, they’d play stuff together. Jorma on an acoustic guitar, Jack on an electric base.

They had never lost their love of the blues and in 1970 they formed their Hot Tuna duo. For Airplane fans used to its psychedelic sounds, Tuna was a revelation.

With the engineers at Epiphone Guitars, Jack has developed the Jack Casady Signature Bass.

According to Casady, “Epiphone and I designed this bass to my exact specifications, certainly a dream come true. I feel we really created a comfortable bass that carries a great, warm tone, and is a lot of fun to play! And it also looks great.”

The  Beginner Guitar HQ site reviewed  what they call Gibson’s little sister the Epiphone Les Paul Special II electric guitar because: “What we need to see is if this is really a Les Paul guitar at a price anyone can pay. Because, instead of a budget Les Paul alternative, this model could be the evidence of too many corners cut.” You can find out here.

Casady has played on dozens of albums. Here is a the AllMusic link to that very long list.

In 1996, Jack Casady was inducted into the Rock and Roll Hall of Fame as a member of the Jefferson Airplane.

As venues begin to reopen, Hot Tuna is a bit back on the road.