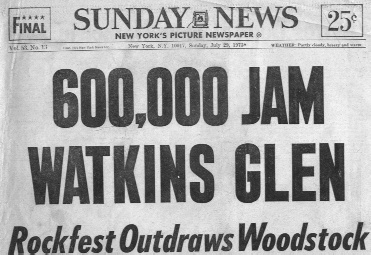 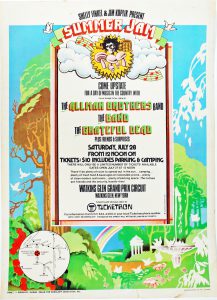 Rock festivals had become a normal part of the warm months and 1973 had the biggest ever, at least in terms of attendance.  Shelly Finkel and Jim Koplin produced the Summer Jam at Watkins Glen, a one-day event with only three bands.

The three bands weren’t just any bands. They were arguably the three biggest rock bands of the time: the Allman Brothers, The Band, and the Grateful Dead. Some attendees bought tickets, 150,000 at least. If that number is accurate, then 450,000 people saw the event for free, because the estimated number of people at the event is 600,000, far outnumbering Woodstock in 1969.

Like no other band before, since, and perhaps ever, the Dead ended up doing 90 minutes with two full sets. Deadheads rate this “show” as one of the best ever!

And like most Dead shows, there are several recordings available: soundboard, audience, and a wonderful matrix.

A crowd of that size required some clever acoustic technology. Every two-hundred feet from the stage, the crew erected additional sets of sound towers.  Seven sets altogether. That alone would have created  acoustic Doppler mayhem with the original sound lagging  behind the forward groups of towers, each delayed and piling upon each other.

The key was setting a 0.175 second delay for the first set speakers and additional delays for each set outward. Such a system created a “single” sound to the brains of guests. (insert joke here)

The word “jam” in the event’s title lived up to its name. The Dead opened the day with a three-hour plus show. The Band followed with a rain-interrupted two hour set.

The Allman Brothers followed with its own three-hour set after which all three bands joined for a 45 minute set of Not Fade Away, Mountain Jam, and Johnny B. Goode.

Despite its location (New York) and its size, Watkins Glen is not nearly as famous as its iconic neighbor in Bethel, 145 miles away. And it is not famous for some of the same reasons that the three dozen plus other festivals of 1969 remain mainly in obscurity: no soundtrack and no movie.

In fact, one can argue that the fate of Woodstock would be similar to that of Watkins Glen if not for it having a movie and album.