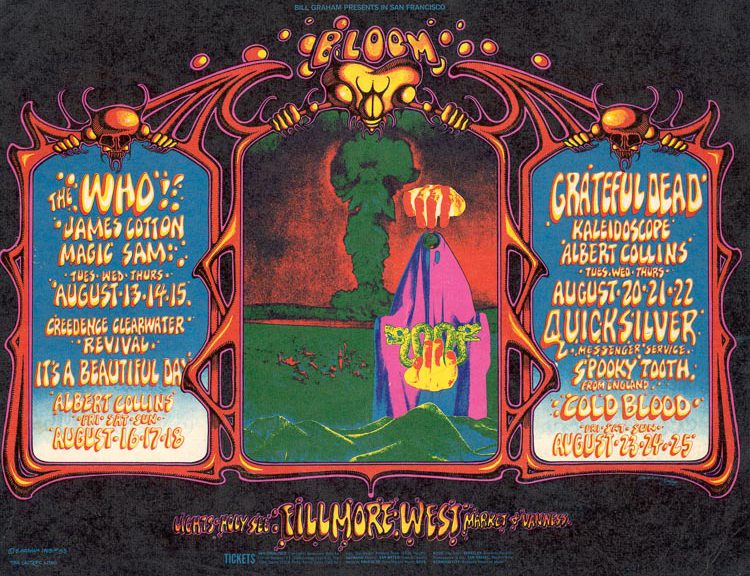 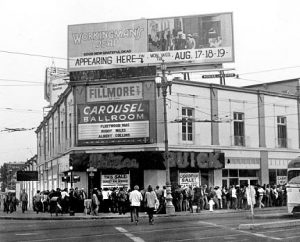 Music production is more arduous than glamorous. The former an everyday description, the latter show nights. With his many ventures, Bill Graham is a name justly associated as one of the greats if not the great rock promoter.

Graham’s first venture happened on November 6, 1965 when he put on  a benefit for the radical San Francisco Mime Troupe at the Calliope Warehouse in San Francisco. He did it to raise money for a legal defense fund for a member of the troupe whom police had arrested a few days earlier. The troupe’s offices were in the warehouse and they figured they could hold about 400 – 500 people. The donation to get in was “at least $1.00.”

For entertainment that night Bill hired a band who who used the same warehouse for rehearsals: the Jefferson Airplane. Also on the bill were The Fugs and Lawrence Ferlinghetti.

The Dead played at the Auditorium more than 50 times.

Bill Graham opened the Fillmore East in NYC on March 8, 1968. It, too, became a mecca for a variety of rock music. Graham was a master of presenting a variety of performers in a single show.

Neighborhood issues and size limitations pushed Graham to look for a different and larger San Francisco venue. He found the Carousel Ballroom. Always associated with music, the venue was first a dance hall.  Recognizing the value of the brand name he’d created, Graham simply re-named the Carousel Ballroom The Fillmore West.

It, too, was short-lived, but oh what a life. As the Fillmore East was the center of rock music on the right coast, the Fillmore West was the same on the left.

The Grateful Dead continued to be Graham’s band and played there total of 64 concerts from 1968 through 1971. 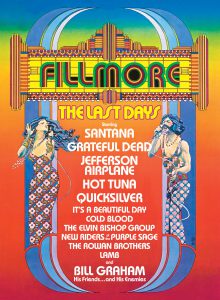 Graham closed the Fillmore West on July 4, 1971 after a spectacular five nights of shows. Among those Graham featured were Boz Scaggs,  Santana, New Riders of the Purple Sage, Taj Mahal, Tower of Power, Grateful Dead, and the Quicksilver Messenger Service. There is a three-disc album, called Fillmore: The Last Days as well as music available via the Concert Vault site.