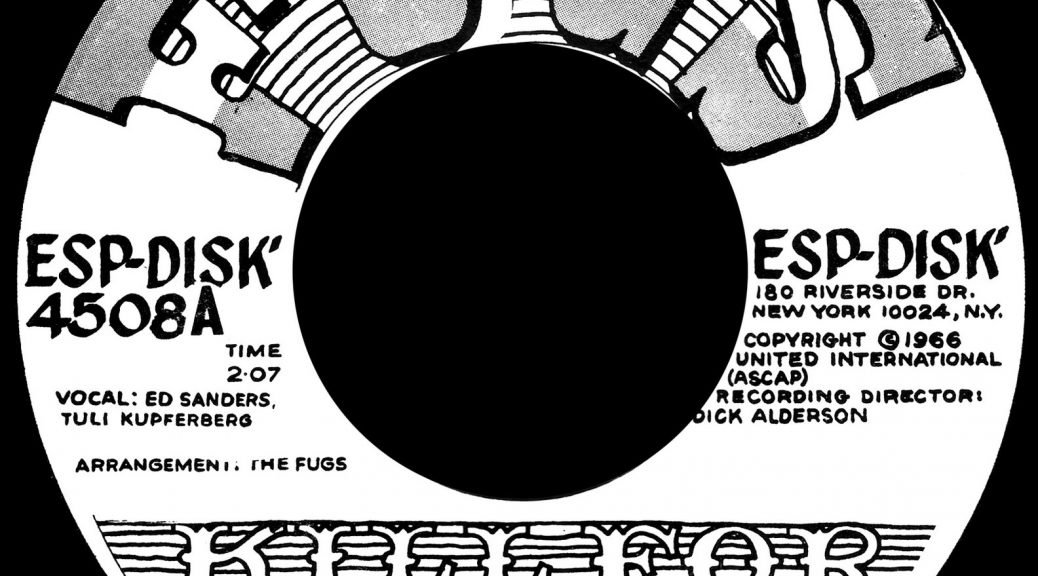 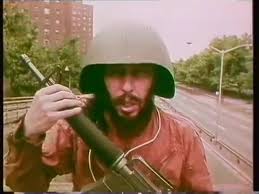 Published in 1948, Rinehart and Company published novelist Norman Mailer’s The Naked and the Dead in 1948. The company convinced novelist Mailer to substitute the word “fug” for “fuck” in the novel.

In the far more open society of 1964, naming one’s group The Fucks was still beyond the pale even if the group emanated from Greenwich Village.

Ed Sanders had rented a former Kosher meat store on East 10th Street in late-1964 and called it the Peace Eye Bookstore. Sanders left up the “Strictly Kosher” sign in the window.

Tuli Kupferberg lived next door. Kupferberg published magazines that he sold on the Village streets. Sanders published some of Kupferberg’s poetry in Sanders’ journal, Fuck You/A Magazine of the Arts.

In late 1964 Sanders and Kupferberg decided to form a rock group. Kupferberg suggested the name Fugs.

According to Sanders, the band used the “… concept that there was oddles of freedom guaranteed by the United States Constitution that was not being used.”

Friend and drummer Ken Weaver joined the Fugs. Then Steve Weber and Peter Stampfel of the Holy Modal Rounders joined.

The band began recording songs in hopes of releasing an album. In the fall of 1965 the Fugs toured as part of an anti-Vietnam War protest. The band  consisted of Ed Sanders, Tuli Kupferberg,  Steve Weber, and Ken Weaver.

The band returned to NYC at the end of to tour to find that Folkways Records had released their first album: The Village Fugs– Ballads and Songs of Contemporary Protest, Points of View and General Dissatisfaction. 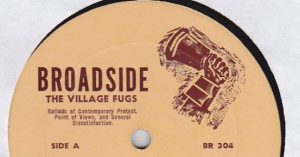 The Fugs left Folkway and signed with a new company, ESP Disk. In early 1966 they recorded a second album. The personnel for the second album the musicians consisted of Sanders, Kupferberg, Weaver, plus keyboardist Lee Crabtree, Vinny Leary (guitar), Pete Kearney (guitar), and Jon Anderson (bass).

ESP-Disk released the Fugs’ second album, The Fugs, in March 1966. Allen Ginsberg wrote the liner notes. It was on this album that the Kupferberg compostion, “Kill for Peace” appeared. The album, to the surprise of many including the band itself, did well and charted. On July 9, 1966 The Fugs! was at 89, just above Martha and the Vandellas Greatest Hits!

According to their site, Popularity also brought us the attention of the United States Federal Bureau of Investigation. A few weeks after the Fugs Second Album was released, there was an FBI investigation of the Fugs, which I learned about years later when I obtained part of my files under the Freedom of Information Act.

Someone at a radio or television station wrote an indignant letter to the FBI complaining about The Fugs. Of course, in those years the FBI was known to write letters to itself, or set up such letters, in order to justify investigations of American activists.

In the early summer a FBI memorandum stated that a Postal Inspector had finished an investigation: “He advised The Fugs is a group of musicians who perform in NYC. They are considered to be beatniks and free thinkers, i.e., free love, free use of narcotics, etc. …. it is recommended that this case be placed in a closed status since the recording is not considered to be obscene.”

If we’d only known about this, we could have put a disclaimer on the record, “Ruled NOT obscene by the FBI!”

Ed Sanders fame helped put him on the cover of Life magazine in February 1967. It also encouraged right wing nuts to send a fake bomb and make threatening phone calls. 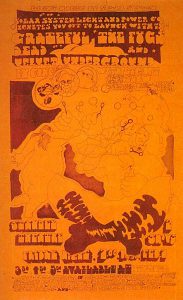 1969 was the Fugs final year (at least for a fugging fifteen years). They played with the Dead and Velvet Underground on February 7 at the Stanley Theater in Pittsburgh.

Again from their site: It had not been an easy time. We were very, very controversial. We were always on the verge of getting arrested. We had bomb threats. We were picketed by right wingers. Someone sent me a fake bomb in the mail. Someone called once and said he was going to bomb, first me, then Frank Zappa. We were investigated by the FBI, by the Post Office, by the New York District Attorney. We were often encouraged not to try to perform again at the same venue. We were tossed off a major label. It took bites out of our spirit. I was getting weary– four years had seemed like forty, and I felt as if I’d awakened inside a Samuel Beckett novel.

There was no invitation to the Woodstock Music and Art Fair, but… 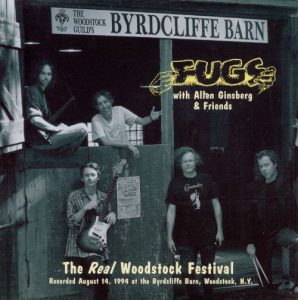 The band reformed in 1985 and began recording again. In 1994 the Woodstock anniversary concert was planned for Saugerties, NY.  Sanders, a resident of Woodstock, NY, thought the reunion far too commercial and profit-driven to be a part of. He organized  a personal Real Woodstock Festival in Woodstock itself in the Byrdcliffe Barn. They held it on August 13 and 14. Thanks to modern media, we can listen to their music from the live album that came from their sets: The Real Woodstock Festival.

Country Joe came over from the Saugerties site to join the Real Woodstock Festival.

Co-founder Tuli Kupferberg died on July 7, 2010, but the band continues to sporadically reform and play.

As Ed Sanders writes at the end of the band’s history, Dum spiro, spero, the Latin adage goes– while we breathe, we hope.

3 thoughts on “Fugs Kill For Peace”