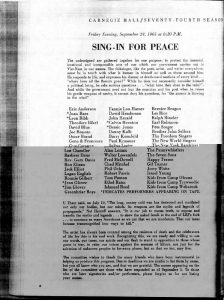 On Friday evening September 24, 1965 at 8:30 PM there was a Sing-In For Peace. The program stated that “The undersigned are gathered for one purpose: to protest the immoral, irrational and irresponsible act of war which are government carries out in Viet-Nam in our names. The folksinger, like the poet, artist, and writer everywhere must be in touch with what is human in himself as well as those around him. He responds to life, and expresses his dismay at death-ward motions of every kind…”where have all the flowers gone?” While he does not necessarily consider himself a political being, he asks serious questions…“what heave they done to the rain?” And while the government need not fear the musician and the poet when he raises his gentle weapons of sanity, it cannot deny his questions, for “the answer is blowing in the wind.”

Irwin Silber, editor of Sing Out!’ magazine, Barbara Dane, and Pete Seeger, and other folk musicians organized “Sing-In For Peace.”

Obviously the concert did not end the war. Or did it? What weighs more, a ton of feathers or a ton of steel. The answer, of course, is both weigh the same and this concert was one of the many feathers that collectively helped educate other Americans to the the horrors and immorality of the Vietnam.

In 2007, Congress designated September 25 as a day of remembrance for murder victims. September 25, 2016, marked the Concert Across America to End Gun Violence. Across the United States  in more than 300 venues hundreds of musicians will perform for a cause: end gun violence.

While American soldiers are today still stationed across the world and many in harms way, another war is happening. A war on ourselves. Data from the U.S. Centers for Disease Control show that on an average day, 91 Americans are killed with guns. There are nearly 12,000 gun murders a year in the U.S. – and despite falling crime rates, that number has barely changed since the late 1990s.

If the media’s enthusiastic and over-the-top coverage of the far less lethal zika virus was as intense regarding gun violence, perhaps we’d realize that gun violence is far more dangerous to Americans than any mosquito.

The Concert Across America to End Gun Violence may only be a feather, but it will, like the Sing-In for Peace, be part of an increasing activism on the part of all citizens to stop the madness.