October 26, 1825: after eight years and at least 1,000 worker deaths—mostly Irish immigrants—the 350-mile Erie Canal opened, linking the Great Lakes and the Atlantic Ocean via the Hudson River. Father John Raho wrote to his bishop that “so many die that there is hardly any time to give Extreme Unction (last rites) to everybody. We run night and day to assist the sick.” Governor DeWitt Clinton of New York, the driving force behind the project, led the opening ceremonies and rode the canal boat Seneca Chief from Buffalo to New York City (TM, see November 26, 1832; Labor, see January 29, 1834)

Prior to the Civil War, many Southern states, including Texas, barred enslaved or free black people from testifying against white people in court proceedings. Following the Confederacy’s defeat, those states were forced to comply with requirements created by the Republican-controlled Congress in order to be readmitted to the Union, including altering their laws and state constitutions to respect black Americans’ new status as citizens with civil rights.

On October 26, 1866, the Texas legislature passed a law redefining the circumstances in which blacks could testify in court. Rather than simply establish that black people would have full and equal rights to testify, Texas lawmakers crafted a statute that provided that “persons of color shall not testify” except in cases where “the prosecution is against a person who is a person of color; or where the offense is charged to have been committed against the person or property of a person of color.”

In civil cases between white parties and in criminal prosecutions of white people not charged with offenses against a black person, black people remained second-class citizens with no right to air their grievances in a court of law. In addition, even in the cases in which black witnesses were permitted to speak, few could have much faith in the promise of equal justice — a court system that limited rights based on the color of one’s skin also was likely to judge credibility by those same terms. (see February 6, 1867) 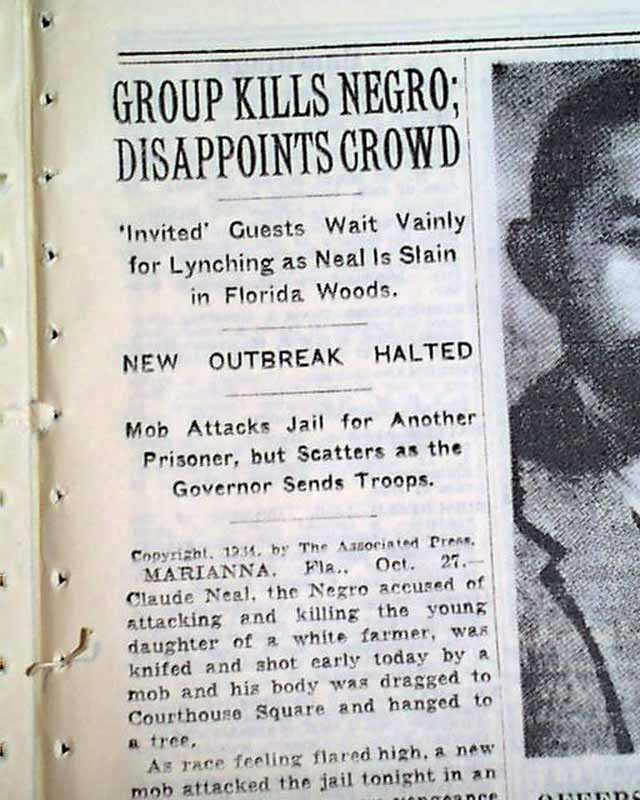 October 26, 1934: on Thursday, October 18, 1934. Lola Cannidy left her home about noon to water the family livestock. The young white woman never returned. Her mutilated body was found the next morning on a wooded hillside near her home.

Two hours later, Claude Neal, a farmhand who lived across the road from the Cannidy home, was arrested and charged with her rape and murder.

After his arrest, Neal was immediately moved to the neighboring town of Chipley. But when an angry crowd began to gather the sheriff to moved Neal to Panama City, florida. Neal was moved several more times before ending up over 200 miles away in Brewton, Alabama. But it wasn’t far enough.

On the morning of October 26, a mob of more than 100 people showed up at the Brewton jail and hauled Neal back to Marianna. They announced their intention to lynch Neal between 8 and 9 p.m. Friday night – an advance notice of 12 hours.

News of the upcoming lynching spread quickly. Newspapers and radio stations not only in Florida, but across the nation, reported that the lynching was going to take place. And despite the flood of telegrams requesting him to step in, Florida governor Dave Sholtz declined to do so, stating that local authorities had the situation under control.

By the time Friday evening came around, a large crowd of several thousand people had gathered outside the Cannidy farm to observe and participate in the lynching. But the size of the mob began to make the men holding Neal nervous. So the “Lynch Committee of Six,” as the group called itself, decided to take him to another location where they would have better control over how the lynching was carried out.

According to eyewitness accounts and newspaper reports, it was a drawn out and torturous process. Soon after arriving at the chosen spot, Neal was castrated. His torso was cut and stabbed with knives and sticks. His fingers and toes were cut off and the remainder of his body burned with hot irons. One newspaper account states there were 18 bullet holes in Neal’s chest, head and abdomen.

Neal’s body was then tied to the rear of an automobile and dragged to the Cannidy farm, where women and children participated in the final acts of mutilation. The body was then hung from an oak tree on the courthouse lawn. Photos were taken and later sold for 50 cents a piece. Neal’s fingers and toes were reportedly exhibited as souvenirs.

The local sheriff cut the body down the following morning. A mob soon formed demanding that it be hung up again. The sheriff refused, the mob descended upon the courthouse. The mob then dispersed into the city streets and began attacking the remaining blacks in town. [PBS story] (next Lynching, see November 12, 1935 or see Chronology for an expanded list of this era’s lynchings)

In 1935: Mary McLeod Bethune organized the National Council of Negro Women, a coalition of black women’s groups that lobbied against job discrimination, racism, and sexism. (next BH, see Mar 19)

October 26, 1921: President Warren G. Harding spoke at the 50th Anniversary celebration of the founding of Birmingham, Alabama. Before a crowd of about 100,000 whites and African-Americans, he gave a strong civil rights message: “Let the black man vote when he is fit to vote; prohibit the white man voting when he is unfit to vote.” Reportedly his statement was greeted with complete silence. (see Dec 20)

October 26, 1937: the US Supreme Court declined to review the Haywood Patterson and Clarence Norris convictions.

October 26, 1960: Coretta Scott King and others were seriously worried that King might be lynched while in custody. Word of this reached John Kennedy’s presidential election campaign team, and they decided that Kennedy should call her. Kennedy did, on this day, and expressed his sympathy about her husband’s situation. He did not promise to take any action, but his brother, Robert Kennedy called both the governor of Georgia and the judge in the case, and that was thought to have had some effect. King was promptly released the next day, on October 27, 1960.

Word about Kennedy’s call circulated widely in the African-American community. Some political commentators believed the publicity gained Kennedy enough African-American votes to give him victory in the November presidential election, but others dispute this interpretation. (see Oct 27)

October 26, 1970: certain states and boxing commissions begin to consider allowing Ali to fight. After a three-year exile, Muhammad Ali returned to the ring in Atlanta to fight Jerry Quarry. Ali knocked out Quarry in the third round. (BH, see February 2, 1971: Ali, see March 8, 1971)

October 26, 1942: the USS South Dakota took part in the Battle of the Santa Cruz Islands and shot down 26 Japanese planes. Graham’s gun crew accounted for seven of them. (see Calvin Graham)

October 26, 1916: Margaret Sanger’s clinic was raided by the vice squad and shut down. The women were arrested and all the condoms and diaphragms at the clinic are confiscated. (Sanger freed on bail)

In 1917, Margaret Sanger will meet Katharine McCormick at one of Sanger’s Boston lectures, and struck up an enduring friendship. Sympathizing with Sanger’s movement, McCormick made small contributions to the cause and smuggled diaphragms into the United States for Sanger’s clinics. (see Feb 2)

October 26,1954: the Comic Book Code adopted on this day paralleled the earlier motion picture code (June 13, 1934) and was intended to “clean up” comic books so that they would not cause young people to become juvenile delinquents. The context of the code was a national panic over juvenile delinquency in the 1950s. (see October 24, 1955)

October 26, 1955: Ngo Dinh Diệm proclaimed the formation of the Republic of Vietnam, with himself as its first President. Elections had been scheduled to reunify the country in 1956, but Diệm refused to hold them, claiming that a free election was not possible in the North. (Vietnam, see June 8, 1956; SVL, see May 9, 1957)

see Rebel Without a Cause for more

October 26, 1955: Rebel Without a Cause movie released. The NY Times states: It is a violent, brutal, and disturbing picture of modern teen-agers…. Young people neglected by their parents or given no understanding and moral support by fathers and mothers who are themselves unable to achieve balance and security in their home…It is a picture to make the hair stand on end. (next Teenage Culture, see January 23, 1957) 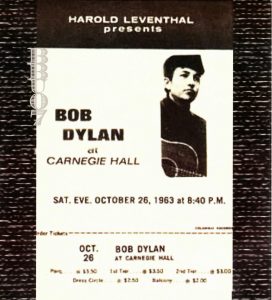 October 26, 1963: Dylan gave a sold-out concert at Carnegie Hall. His parents, Abe and Beatty Zimmerman came in from Hibbing, MN for the concert. (November 2 – December 6, 1963)

October 26 – November 1, 1963,  a year after being the Billboard #1 album, Peter, Paul, and Mary’s Peter, Paul, and Mary  was again the #1 album. [Pete Seeger and Lee Hays wrote  If I Had a Hammer in 1949 in support of the progressive movement, and was first recorded by The Weavers, a folk music quartet composed of Seeger, Hays, Ronnie Gilbert and Fred Hellerman, and then by Peter, Paul and Mary. The Weavers released the song under the title “The Hammer Song” as a 78 single in March, 1950 on Hootenanny Records. 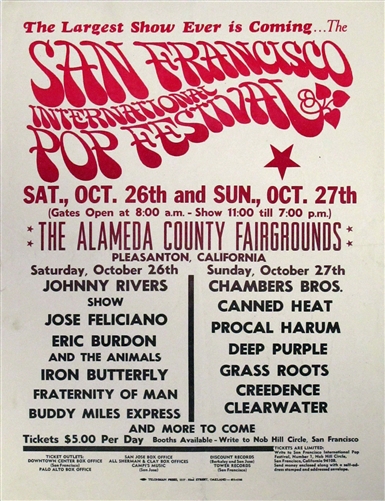 October 26, 1962: in one of the most dramatic verbal confrontations of the Cold War, American U.N. Ambassador Adlai Stevenson asked his Soviet counterpart during a Security Council debate whether the USSR had placed missiles in Cuba. Meanwhile, B-52 bombers were dispersed to various locations and made ready to take off, fully equipped. (see Cuban Missile Crisis)

October 26, 2014: 155 States, an increase of 30 from the previous year, submitted a joint humanitarian appeal for nuclear disarmament at UN General Assembly. (Nuclear & ICAN, see In December )

October 26, 2022: according to a report issued by the United Nations, countries around the world were failing to live up to their commitments to fight climate change, pointing Earth toward a future marked by more intense flooding, wildfires, drought, heat waves and species extinction,.

Just 26 of 193 countries that agreed last year to step up their climate actions had followed through with more ambitious plans. The world’s top two polluters, China and the United States, had taken some action but had not pledged more in 2022 and climate negotiations between the two had been frozen for months.

Without drastic reductions in greenhouse gas emissions, the report said, the planet is on track to warm by an average of 2.1 to 2.9 degrees Celsius, compared with pre-industrial levels, by 2100.  [NYT article] (next EI, see Nov 30)