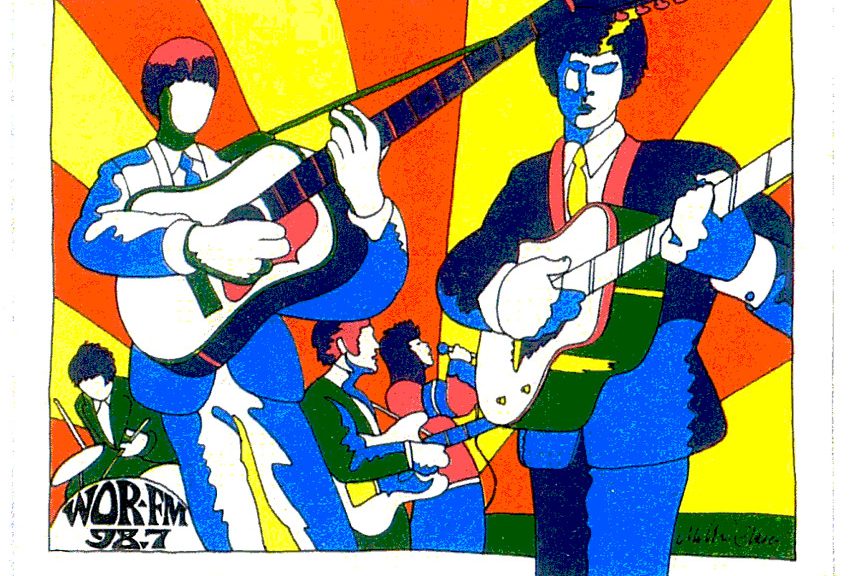 Scott Muni…Saturday 8 October 1966, the first day of DJs on WOR-FM

In the New York metropolitan area, we Boomers had grown up listening to AM music in our parents’ car (when they’d let us) or on our own transistor radios (when we finally got one).

We could watch teenagers dance to the top singles on Dick Clark’s American Bandstand. His shows included a lip-synched performance by a current top 10 artist or band: like this one by Roy Orbison on June 5, 1966.

WOR-FM switched to its rock format on July 31. I remember seeing advertisements beforehand and using my parents’ radio–it had FM unlike my AM-only transistor radio. 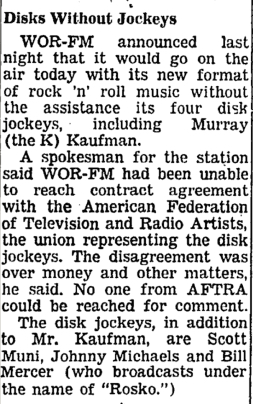 I didn’t realize that union difficulties meant no DJs at first. All I knew was that the lack of DJ chatter meant more room for music. And that’s what I wanted. The down side was that if I heard a song I liked but didn’t recognize (e.g., Buffalo Springfield‘s “Nowadays Clancy Can’t Even Sing”) I was stuck.

Those songs of those first days were far from the future of album-oriented playlists. Here’s are some examples from that first day:

Quite a variety, but obviously not the album cuts that many of us would come to love.

As WOR-FM’s DJ gained experience and confidence with the evolving format, management began to balk. Murry the K left in August 1967.  His replacement, Jim O’Brien, played more of a Top 40 format that management preferred to the free-form that had started to happen. By the fall of 1967, the Top 40 format, much like the traditional AM format, had happened. [Music Radio 77 article]

On October 2, 1967, DJ Rosko announced his departure and the reasoning for that departure right on the air. His discussion reflect the thinking and the approach that some young people were realizing was a preferred format and one that they had become attached to (click to listen):

WNEW-FM took up the reins of that more relaxed, increased choice, and variety-filled approach the fall of 1967. Rosko arrived. Scott Muni arrived. Alison Steele (already there) became the “Nightbird.” Jonathan Schwartz and Dick Summer also became part of that line-up.