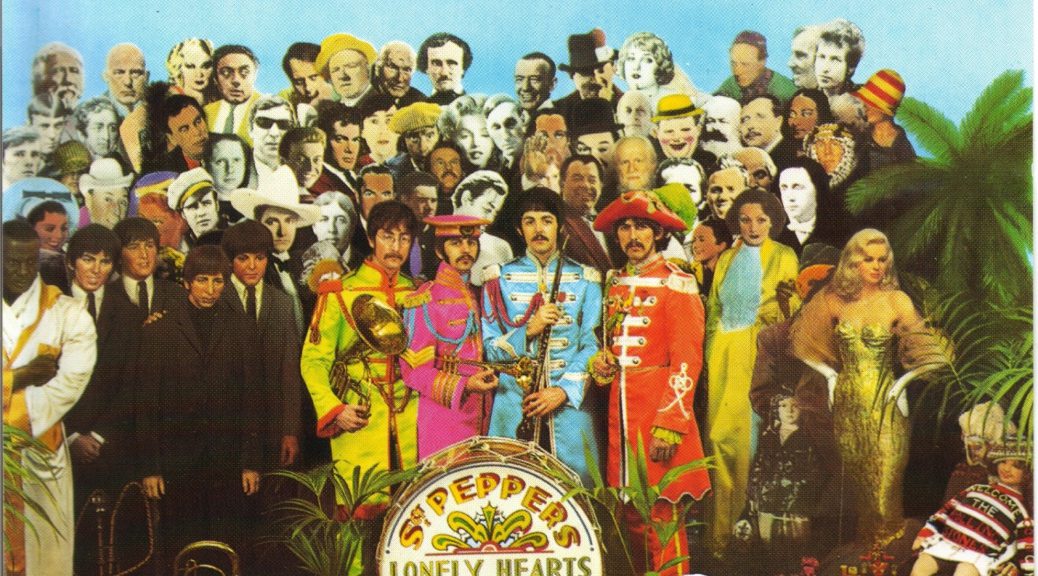 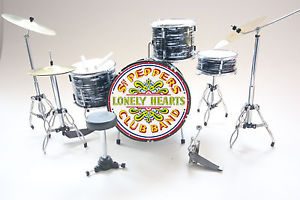 First, I’ll clear up the seemingly ignorant error in my post’s title. Yes I know that it is Sgt Pepper’s (possessive) but for Search Engine Optimization purposes, the algorithm rejects apostrophes. And besides that, as you can see Ringo’s drum kit has the leaders last name as Peppers, not Pepper.

So I stand on one weak leg to support my blog’s title.

The Beatles (and George Martin) completed recording the album on  21 April 1967 and had used–by today’s standards–primitive four-track equipment to do so.

They did use various tricks with that equipment. Geoff Emerick was the lead engineer.

Forbes magazine did an excellent article about the recording.

For example, Emerick, “…had Ringo tune his toms very low by loosening the skins on the drum heads. Emerick then removed the skins from the bottom of the toms, wrapped a mic in a tea cloth, put it in a glass jug, and placed it on the floor under the drums. The result was the huge, tympani-like drum sounds you hear on the verses in “A Day in the Life”.”

For Lovely Rita, he “…introduced a wobble underneath the piano sound by sticking pieces of editing tape to the guide rollers on the tape machine that was feeding the audio from the piano to an echo chamber. “

It spent the rest of the year at #1 on the UK charts and 15 weeks at the top in the US.

Keep in mind that although some might have been able to know that the Beatles were releasing something new and different, for most fans, given the lack of accessibility to such information, Sgt Pepper was a surprise.

At the beginning they greet us as Sgt Pepper’s Lonely Hearts Club Band and by the time we get almost to the end of Side 2 they are hoping that we’ve enjoyed the show.

How far the Beatles had taken us on that album. For thirty-five minutes we’d listened to song after song, not realizing that “A Day in the Life” was about to tell us, among other things, how many holes it took to fill Albert Hall, whatever and wherever that was.

Did you follow along with each song because the lyrics were right on the back of the album. Right there!! That was a first. 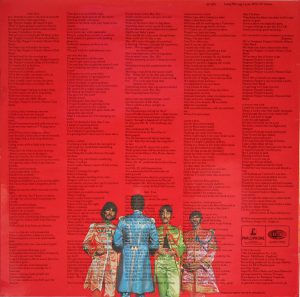 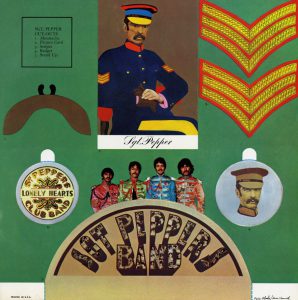 And if we weren’t following the lyrics (because this was the 10th time we were listening to the album–“I’ll be down soon, Mom.”), were you trying to figure out who’s who on the cover? 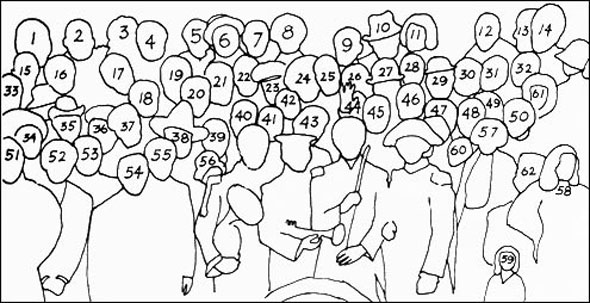 Fortunately we are caught in the world wide web today and can easily get those 62 answers.

Here we are: decades later and we still know in our hearts that those Lonely Hearts led us along paths we had never known. The introduction (an introduction?) hoping we’ll enjoy the show and telling us to sit back and let the evening go.

Good ol’ Ringo getting a little high with his friends. John’s Lucy. How long did it take for you to see the initials?

Getting better. Optimism. “Me used to be angry young man.” And how each song slides into the next one. Not angry because I’m fixing a hole. Then we pause because she’s leaving home. Motorman?

And good morning. Feeling low down. You’re on your own. Take a walk.  Time for tea and meet the wife. But it’s OK. That dog barking reminded a few of us of Brian Wilson’s Pet Sounds.

And back to the beginning to get to the end.

This finish may finish us. A holy shit moment. John’s voice warning us. He blew his mind…lights changed…[Ringo’s drums!]…had to look…I’d love turn you on!