An American military presence in Vietnam began in 1950 under President Truman.

Four days after the assassination of President Kennedy, on Tuesday 26 November 1963, President Lyndon B. Johnson’s new administration reaffirmed the U.S. commitment to the Republic of Vietnam.

The American public’s conception of the war did not began until August 1964 when naval attacks by the North Vietnamese was reported and on August 7 the U.S. congress passed the Gulf of Tonkin Resolution, giving President Johnson the power to take whatever actions he saw necessary to defend southeast Asia.

In 2003, Sony Pictures Classics released Errol Morris‘s documentary “Fog of War.” In it, Robert McNamara, President Johnson’s Secretary of Defense. admitted that there was no actual second attack.

In any case, as you can see, following the Gulf of Tonkin Resolution, the American presence in Vietnam, and the resulting casualties, increased dramatically.

From live turkeys dropped in 1962…

Thanksgiving in the Vietnam War 1965…from President Johnson to the armed services: Today Americans of all faiths gather in their homes and places of worship and give thanks for the blessings of our great land. [Thanksgiving and Vietnam, 1965]

Thanksgiving in the Vietnam War 1966… Most American servicemen in Vietnam will haveThanksgiving dinners tomorrow starting off with shrimp cocktail and going on through turkey and giblet gravy…. [Thanksgiving and Vietnam, 1966]

Thanksgiving in the Vietnam War 1968…Some 500,000 pounds of turkey are on the way to mess halls and tents throughout South Vietnam… [Thanksgiving and Vietnam, 1968] 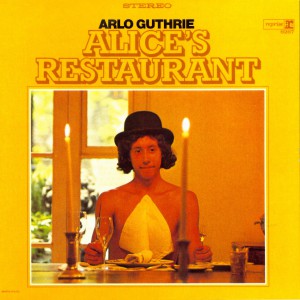 The day after Thanksgiving 1965, Friday 26 November, Great Barrington police arrested Arlo Guthrie for littering in the nearby town of Stockbridge, MA. The resulting adventure would be immortalized in his song “Alice’s Restaurant,” one of the most influential protest songs of that era. 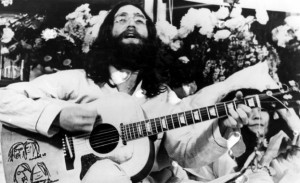 By the mid-60s’ Beatlemania was gone, but individual Beatles still had an impact.

On November 26, 1969,  the day before the American Thanksgiving celebration, John Lennon returned his MBE to the Queen as an act of protest against the Vietnam war.

I am returning my Member of the British Empire as a protest against Britain’s involvement in the Nigeria-Biafra thing, against our support of America in Vietnam and against ‘Cold Turkey’ slipping down the charts.

With love. John Lennon of Bag