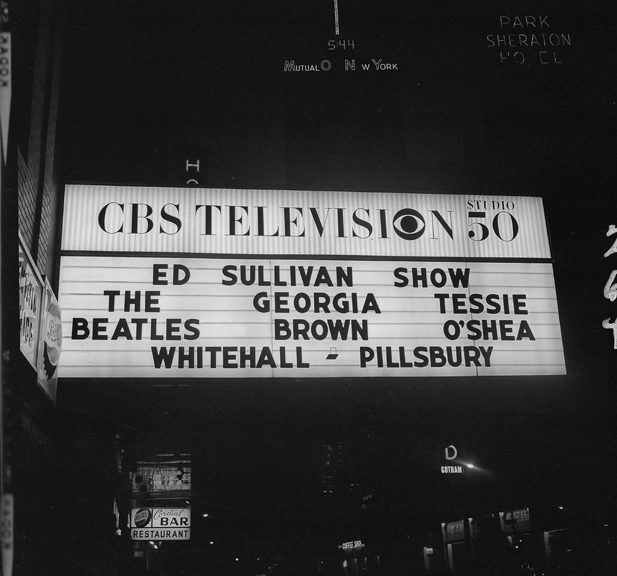 From the NY Times article, February 9, 1964: Beatlemania creeps in slowly. Collar­less jackets, usually worn Saturday nights on Forty‐second Street, are turning up in the strangest places, like the safe suburbs. Teen‐agers who once considered the G.I. crew‐cut the height of adolescent fashion are letting their locks curl down their necks and over ears and across foreheads. Twenty thousand beatle wigs have been sold.

The day the music died

Everyone has milestone dates. Generations share dates. For Don McLean February 3, 1959, the day a plane crash killed Buddy Holly, the Big Bopper, and Ritchie Valens, was “The Day the Music Died.” 12 years later, McLean wrote “American Pie.” In it , a 13 year old newsboy remembers that “February made me shiver/with every paper I’d deliver”

For Boomers, shared “where we were” dates are likely: when we found out President Kennedy was killed or later Martin Luther King, Jr, or that same year, Robert Kennedy. Each, like McLean’s, a sad day.

The day the music was reborn

February 9, 1964 is at the other end of that spectrum. Rather than the music dying, the music was born.

That was the evening we sat in front of our black and white TV (the only one in our home?) and watched The Beatles inaugural performance on the Ed Sullivan Show.

Unless you are a Beatles trivia fan, you may not know that that afternoon the Beatles had recorded Twist And Shout, Please Please Me, and I Want To Hold Your Hand, in front of a different audience than the one that saw their live debut that evening. Ed Sullivan broadcast that set on 23 February on their third appearance. By the 23rd, John, Paul, George and Rich were back home in the UK.

On the evening of February 9, 1964, the Beatles performed “All My Loving,” “Till There Was You,” which featured the names of the group members superimposed on closeup shots, including the famous “Sorry girls, he’s married” caption on John Lennon, and “She Loves You.” The act that followed Beatles in the broadcast was pre-recorded, rather than having someone perform live on stage amidst the pandemonium that occurred in the studio after the Beatles did their first songs. They returned later in the program to perform “I Saw Her Standing There” and “I Want to Hold Your Hand.” The broadcast drew an estimated 73 million viewers, at the time a record for US television.

How he met the Beatles

How Ed Sullivan’s and the Beatles’ paths crossed is open to some guessing. The most popular story is that Ed Sullivan and his wife happened to be in London’s Heathrow Airport on October 31, 1963 when they encountered thousands of screaming teenagers. (Ironic, I suppose, as he’d have to get used to such happenings in just a few months!)

When he asked what the commotion was all about, he was told that a band called the Beatles  were arriving.

He decided that such popularity was something he’d love to bring to his American show.

Whether that is actually the sequence or not matters not.  By mid-November, Beatles manager Brian Epstein had booked the Beatles.

And like the moon landing, we all remember where we were.

I’d love to see comments about where you were!