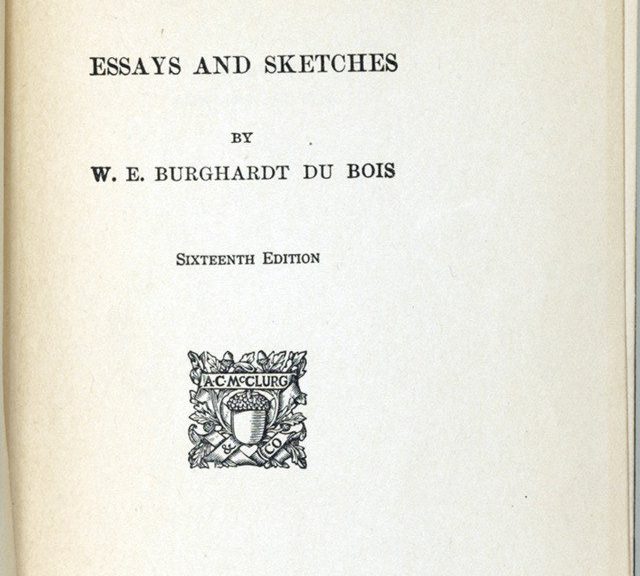 April 27, 1892: two white girls reported that black men had assaulted them. Four or five black men were quickly arrested and taken to jail, including Ephraim Grizzard, and his brothers Henry and John. On this date, a mob seized and lynched Henry Grizzard. [EJI article]  (next BH & Lynching, see Apr 30 or see 19th century for expanded lynching chronology)

April 27, 1903: Giles v. Harris, US Supreme Court upheld Alabama’s state constitution’s requirements for voter registration and qualifications. Although the plaintiff accused the state of discriminating in practice against black citizens, the Court found that the requirements applied to all citizens and refused to review the results in practice, which it considered overseeing the state’s process.

The Souls of Black Folk April 27, 1919: Garvey announced his plan to start the Black Star Line. The Black Star Line was to be the U.N.I.A.’s vehicle for promoting worldwide commerce among black communities. In Garvey’s vision, Black Star Line ships would transport manufactured goods, raw materials, and produce among black businesses in North America, the Caribbean, and Africa, and become the linchpin in a global black economy. (BH, see May 10 – 11; see Garvey for expanded story) April 27, 1994: general voting opened in the first election in South African history that included black participation. Despite months of violence leading up to the vote, not a single person was reported killed in election-related violence. When the voting concluded on April 29, the A.N.C. had won more than 62 percent of the vote, earning 252 of the 400 seats in Parliament’s National Assembly. Voters chose Mandela as president without opposition. (see May 10)

April 27, 2013: for the first time in the history of Wilcox County, Georgia, black students and white students danced arm-in-arm at prom. Nearly 60 years after the U.S. Supreme Court ruled that segregation in public schools was illegal, half of the students from rural Wilcox County High School ended their community’s tradition of segregation after raising money for an integrated prom dance. (BH, see June 20; School Desegregation,  see Sept 13)

April 27, 2015: Cuyahoga County Common Pleas Judge John P. O’Donnell declined to acquit Cleveland police officer Michael Brelo and bring an end to his voluntary manslaughter trial before hearing any defense witnesses. O’Donnell, ruling on a defense request for the acquittal, ruled that the prosecution has presented enough evidence in the trial to warrant hearing the other side’s case.

In his ruling, O’Donnell wrote, “taking the evidence in a light most favorable to the state, at least 34 of Brelo’s 49 shots were reasonable to deal with a perceived threat. If he is eventually found guilty of voluntary manslaughter beyond a reasonable doubt in the face of his affirmative defense that all of his shots were legally justified it will mean only that he was not justified in taking one or more of those last 15 shots to confront the perceived threat.” (see 137 shots for expanded story)

April 27, 2015: with the words “black lives matter” projected in capital letters on the walls, thousands of mourners crowded into a church …to bid an emotional goodbye to Freddie Gray, the 25-year-old who died from a spinal cord injury while in police custody, and to demand reforms in law enforcement and far beyond it.

Friends, neighbors, activists and government officials from the local level to the White House filled New Shiloh Baptist Church and filed past the open, white coffin bearing the body of Mr. Gray, whose death on April 19 fed claims of discriminatory and brutal policing, and set off a week of protests here. The church, with seating for 2,200, was filled to overflowing for the funeral, with many people standing inside and more standing outside, unable to crowd in. (B & S and FG, see May 1 )

In 1908: while studying in England, American Alice Paul met Emmeline and Christabel Pankhurst, leaders of the Women’s Social and Political Union. Paul will bring their more militant tactics in pursuit of women’s suffrage back to America in 1910. (Feminism, see February 24, 1908; VR, see July 21, 1908)

April 27, 1942: Goldman v. United States, the U.S. Supreme Court upheld the conviction of Martin Goldman and a fellow lawyer for conspiracy to violate the Bankruptcy Act through a plan to defraud creditors, noting that the government’s use of eavesdropping to gather evidence did not violate the Fourth Amendment. After receiving notice of the lawyers’ intentions, federal agents had obtained evidence of the plan by surreptitiously listening to conversations through a wall in an adjacent room with a detectaphone device attached to the wall. (see June 1)

April 27, 1955: The Battle of Saigon began. It was a month-long fight between the Vietnamese National Army of the State of Vietnam (later to become the Army of the Republic of Vietnam) and the private army of the Bình Xuyên organised crime syndicate. At the time, the Bình Xuyên was licensed with controlling the national police by Emperor Bảo Đại, and Prime Minister Ngô Đình Diệm issued an ultimatum for them to surrender and come under state control.

The VNA largely crushed the Bình Xuyên within a week.

Fighting was mostly concentrated in the inner city Chinese business district of Cholon. The densely crowded area saw some 500-1000 deaths and up to 20,000 civilians made homeless in the cross-fire.

In the end, the Bình Xuyên were decisively defeated, their army disbanded and their vice operations collapsed.

President Eisenhower had decided to cease US support for President Ngo Dinh Diem and let him be ousted, but on April 28… ( V & SVL, see Apr 28)

April 27, 1959: “Your Hit Parade,” a successful radio music show that had begun in 1935 and then gone on to television in 1950, ended because the music it played could not compete in popularity with the emergence of rock and roll. (see April 21, 1960)

April 27 – May 17, 1963, Margaret Annemarie Battavio’s very first single, “I Will Follow Him,” reached #1 on the U.S. pop charts. With her 15th birthday only six weeks behind her, and three more years of high school ahead of her, the singer better known as Little Peggy March became the youngest female performer ever to top the Billboard Hot 100, but she’d never crack the top 10 again. (see May 2) April 27, 1978: a cooling tower for a power plant under construction in Willow Island, West Virginia collapsed, killing 51 construction workers in what is thought to be the largest construction accident in U.S. history. OSHA cited contractors for 20 violations, including failures to field test concrete. The cases were settled for $85,000—about $1,700 per worker killed. (see June 22) April 27, 1993: a California law judge suspended Kevokian’s medical license after a request from that state’s medical board. (see Kevorkian for expanded story) The justices asked the Cincinnati-based 6th U.S. Circuit Court of Appeals to reconsider its decision that backed the Obama administration in light of the Supreme Court’s June 2014 ruling that allowed certain privately owned corporations to seek exemptions from the provision.

Various challengers, including family-owned companies and religious affiliated nonprofits that oppose abortion and sometimes the use of contraceptives, say the requirement infringes on their religious beliefs.

The high court threw out a June 2014 appeals court ruling that went in favor of the government. In March, the court took a similar approach in a case concerning the University of Notre Dame. (see May 19)

April 27, 2017: Arkansas executed Kenneth Williams in the state’s fourth lethal injection in eight days, concluding a frantic execution schedule officials said was necessary to carry out death sentences before one of their drugs expired. Witness accounts of the execution, the last one on the schedule in Arkansas, prompted immediate questions after journalists said they saw the inmate lurching and convulsing during the lethal injection. (see Sept 26)

On July 15,1930 US Senator Blease proposed a lynch law for blacks (only) guilty of criminally assaulting white women.

The quick biographical description of Coleman L Blease reads like many other elected officials of his times: the late 19th and early 20th centuries.