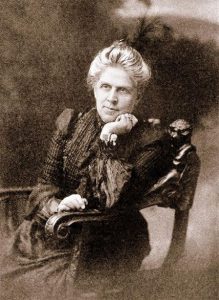 According to the Matilda Josyln Gage Foundation site: Matilda Joslyn Gage was born on March 24, 1826, in Cicero, New York. An only child, she was raised in a household dedicated to antislavery. Her father, Dr. Hezekiah Joslyn, was a nationally known abolitionist, and the Joslyn home was a station on the Underground Railway.

If we were to stop there, we would limit her life to that of an abolitionist, a worthy cause, but she was so much more. She fought for the rights of anyone oppressed as well as the separation of church and state.

Her adult life began 19th century-conventionally: she married Henry Gage when she was 18 and eventually gave birth to five children–four of whom lived. Gage was an unusual husband in that he gave his wife a freedom few wives of that time could ever hope for.

That personal freedom was not only in great contrast to women, but of course to enslaved men and women.

On October 4, 1850 Gage [24 years old] signed petition stating that she would face a 6-month prison term and a $2,000 fine rather than obey the Fugitive Slave Act.

She would have attended the first Women’s Wights Convention in Seneca Falls, NY (July 19, 1848) but she was pregnant and about to give birth to her son Thomas.

Two years later in September 1852  she gave her first public address at the third national women’s rights convention in Syracuse stating: While so much is said of the inferior intellect of woman, it is by a strange absurdity conceded that very many eminent men owe their station in life to their mothers.

She also said that, “Custom has been, and is now, the mistress who plants her foot on the too willing neck of prostrate womanhood.”

Gage was very capable of juggling more than one cause at at time. In 1862 she gave a Flag Presentation Speech to the 122nd New York Volunteer Infantry known as the “Onondagas” [named from their home area,  Onondaga County, New York] as they went off to the Civil War. Opposing President Lincoln, who said that the war was being fought to preserve the union, Gage told soldiers they were fighting for an end to slavery and freedom for all citizens. 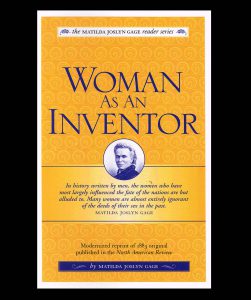 In 1870 Gage researched and published “Woman as Inventor.” In it, Gage credited the invention of the cotton gin Catherine Littlefield Greene. Gage claimed that Greene suggested to Whitney the use of a brush-like component instrumental in separating out the seeds and cotton. [Gage provided no source for this claim and to date there has been no independent verification of Greene’s role in the invention of the gin. However, many believe that Eli Whitney received the patent for the gin and the sole credit in history textbooks for its invention only because social norms inhibited women from registering for patents.]

In the 1870s: Gage wrote a series of articles speaking out against United States’ unjust treatment of American Indians and describing superior position of native women. “The division of power between the sexes in this Indian republic was nearly equal,” Gage wrote of the Iroquois. In matters of government, “…its women exercised controlling power in peace and war … no sale of lands was valid without consent” of the women, while “the family relation among the Iroquois demonstrated woman’s superiority in power … in the home, the wife was absolute … if the Iroquois husband and wife separated, the wife took with her all the property she had brought … the children also accompanied the mother, whose right to them was recognized as supreme.” “Never was justice more perfect, never civilization higher,” Gage concluded. 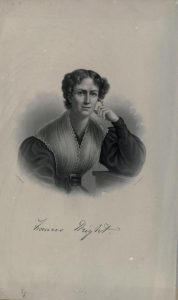 On May 10, 1876 she chaired at the Ninth Annual Convention of the National and New York State Woman Suffrage Associations. In her opening address she said that during the past 100 hundred years man had had his share of the advantages of the Declaration of Independence, but woman at the outset of the second century of the Republic stood just where she had in 1776.

History of Woman Suffrage was produced by Gage, Elizabeth Cady Stanton, Susan B. Anthony, and Ida Husted Harper. History was published in six volumes from 1881 to 1922.

Its more than 5700 pages are the major source for primary documentation about the women’s suffrage movement from its beginnings through the ratification of the Nineteenth Amendment to the U.S. Constitution, which enfranchised women in the U.S. in 1920. Written from the viewpoint of the wing of the movement led by Stanton and Anthony, its coverage of rival groups and individuals is limited.

From  Starter Home: Discovering the Past in Central New York By Peter Svenson: In 1877, having singlehandedly developed a strategy that mimicked a convicted male felon’s right to petition Congress to regain his right to vote, Gage petitioned Congress in person to grant her “relief from her political liabilities,” i.e., her womanhood. A bill to enfranchise her was introduced on the House floor, but defeated. …Gage was considered more radical that either [Susan B] Anthony or [Elizabeth C] Stanton.

In 1878 Gage was a speaker at the Freethought convention in Watkin’s Glen, NY; an arrest under the Comstock Laws occurs there for the sale of a birth control manual.

From 1878 – 1881 Gage published The National Citizen and Ballot Box, official paper of the NWSA.

In 1880 Gage wrote “Who Planned the Tennessee Campaign of 1862?” Gage argued that a woman, Anna Ella Carroll, planned that campaign in detail. [In the fall of 1861, Carroll had traveled to St. Louis to work with secret agent, Judge Lemuel Dale Evans, who had been appointed by Secretary of State William H. Seward. Carroll gathered information and based on it and in late November 1861 wrote a memorandum that she sent to Assistant Secretary of War Thomas A. Scott and Attorney General Edward Bates, advocating that the combined army-navy forces change their invasion route from the Mississippi to the Tennessee and Cumberland rivers.]

The future Wizard of Oz

November 9, 1882 Gage’s daughter, Maud, married L. Frank Baum in the parlor of the Gage home. Under the influence of his wife and mother-in-law, Baum became an enthusiastic convert to feminism. He was, ”a secure man who did not worry about asserting his masculine authority,” and he was not bothered that Maud had the upper hand in the marriage; in fact he seemed to welcome her take-charge attitude. His feminist beliefs would have a profound effect on his fiction. Nearly all of his child heroes were girls, girls who rely on their own resources and not on the aid, or validation, of men. He thought men who did not support feminist aspirations ”selfish, opinionated, conceited or unjust — and perhaps all four combined,” as he wrote in a newspaper editorial. ”The tender husband, the considerate father, the loving brother, will be found invariably championing the cause of women.”

March 1886 an organizer of the International Council of Women, chaired one session. Convention attended by Woman Christian Temperance Union President Frances Willard, whom Gage called “the most dangerous woman in America,” because of her work with the religious right, trying to destroy the wall of separation between church and state by placing the Christian God as the head of the government. 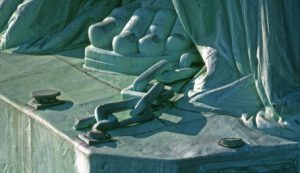 October 28, 1886 she participated in the New York City Woman Suffrage Association’s protest at the unveiling of the Statue of Liberty. Suffragists called it the greatest hypocrisy of the 19th century that liberty is represented as a woman in a land where not a single woman has liberty.

In 1890 Gage left NWSA after its merger with the American Woman Suffrage Association and established the Woman’s National Liberal Union, dedicated to maintaining the separation of church and state. 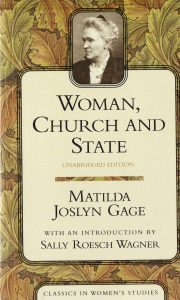 Gage also spoke of organized religion: “The greatest evils to women in all ages have come through the bondage of the Church. Women must think for themselves and realize that the story of the creation with the pair in the garden and the speaking serpent standing on his tail was a myth.”

December 8, 1893 at a meeting of the Woman’s Suffrage League, Gage reacted to a statement made by the Rev Dr Parkhurst about women turned out to get a night’s lodging—that they might “starve or freeze on the streets,” with his consent, if it only brought them to a proper state of repentance. Gage stated, “For every 2,000 women who are turned homeless and friendless into the cold wintry streets, with every man’s hand against them , there are 20,000 men as guilty who are stting in comfortable homes, surrounded with luxury, who pose as honored and respected members of society.” 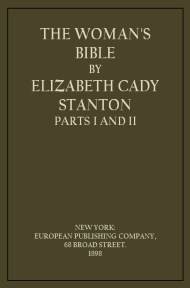 In 1895 Gage contributed to Elizabeth Cady Stanton’s The Woman’s Bible, writing interpretations of three Biblical passages pertinent to women. TWB is a major criticism of standard biblical interpretation from a radical feminist point of view. 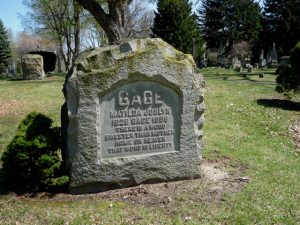 March 18, 1898 Gage died in Chicago at the home of her daughter, Maud Gage Baum. Gage was 72. Written on her gravestone: 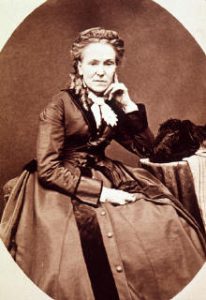 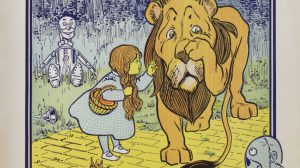 May 17, 1900 L Frank Baum published Wizard of Oz. A young girl named Dorothy is the hero at a time when such a thing was unheard of. 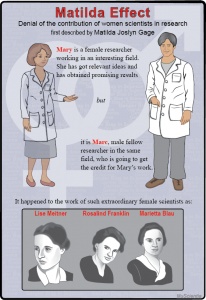 In May 1993 science historian Margaret W. Rossiter described and names “The Matilda effect.”

The abstract of the article stated: Recent work has brought to light so many cases, historical and contemporary, of women scientists who have been ignored, denied credit or otherwise dropped from sight that a sex-linked phenomenon seems to exist, as has been documented to be the case in other fields, such as medicine, art history and literary criticism. Since this systematic bias in scientific information and recognition practices fits the second half of Matthew 13:12 in the Bible, which refers to the under-recognition accorded to those who have little to start with, it is suggested that sociologists of science and knowledge can add to the ‘Matthew Effect’, made famous by Robert K. Merton in 1968, the ‘Matilda Effect’, named for the American suffragist and feminist critic Matilda J. Gage of New York, who in the late nineteenth century both experienced and articulated this phenomenon. Calling attention to her and this age-old tendency may prod future scholars to include other such ‘Matildas’ and thus to write a better, because more comprehensive, history and sociology of science.

In 2000 The Matilda Joslyn Gage Foundation began “when Sally Roesch Wagner, the leading authority on Gage, brought together a nationwide network of diverse people with a common goal: to bring Gage’s vitally important suffragist back to her rightful place in history.”

The foundation’s mission is: dedicated to educating current and future generations about Gage’s work and its power to drive contemporary social change.