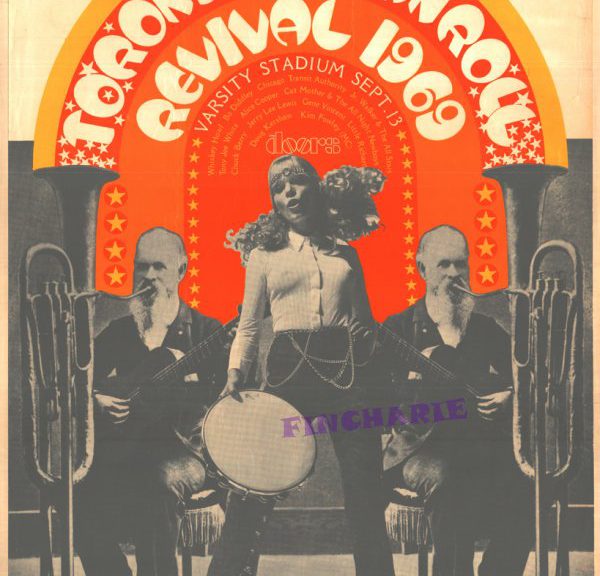 Varsity Stadium, at the University of Toronto

On June 21 and 22, 1969, John Brower and Kenny Walkeron had produced the Toronto Pop Festival in the Varsity Stadium at the  University of Toronto.  Its success encouraged them to do a larger festival in September, but like many musical enterprises, problems ensued.

Kim Fowley to the rescue

Because of poor ticket sales, Brower and Walkeron almost had to cancel the Toronto Rock and Roll Revival when their main backer pulled out.

Musician, producer, and general bon vivant Kim Fowley was going to be the MC of the show. He suggested to Brower to call Apple Records and invite John Lennon and Yoko Ono to be MCs as well. Fowley’s reasoning was Lennon’s love for roots rock and that Chuck Berry, Little Richard, and Gene Vincent were among those in the festival.

Plastic Ono to the rescue

Lennon not only accepted the suggestion, he offered to play at the festival as well. Accompanying Lennon and Ono were Klaus Voormann, Alan White, and Eric Clapton. At first no one believed Brower, but once the recorded conversation of Brower ordering tickets for Lennon et al, tickets sold out.

As mentioned above and as the event’s name implies, this festival (though just one day) had a basic rock line up:

80 members of the Vagabonds motorcycle club rode escort, 40 in front and 40 in back, for John and Yoko’s limousine from the Toronto airport to the university stadium. Luckily for history and us today the organizers filmed the event. D.A. Pennebaker, maker of Bob Dylan’s Don’t Look Back and Monterey Pop again did a great job. There are many pieces of the film, Sweet Toronto on YouTube. The more you watch the better an already great concert gets. Great great rock and roll!

It is a sad commentary that the show’s great stars needed the light of John Lennon to bring a sold out mostly young white audience to listen, but that’s what happened. Ironically, the story is that John Lennon, performing for the first time without Paul McCartney since their 1950s meeting, needed encouragement.

Before introducing the Plastic Ono Band, Kim Fowley had everyone get their matches ready to greet Lennon , Ono, and friends. Whether this was the first time an audience used matches to greet a performer is unknown. It is likely one of the first times.