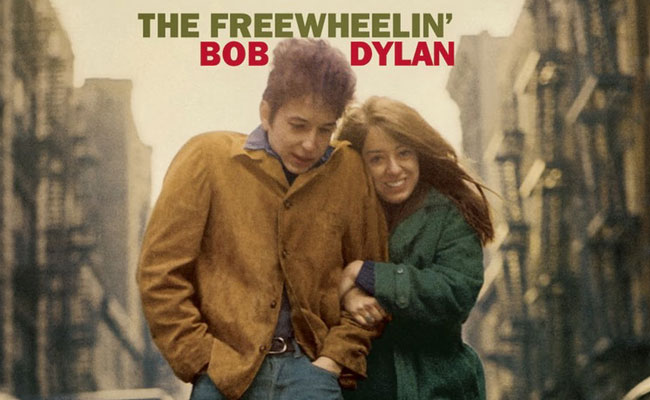 Now we all know Bob Dylan. We have heard the songs on his first album, Bob Dylan. We may know that he only wrote two of that album’s 13 songs: “Talkin’ New York” and “Song to Woody.”  His premier album an iconic moment in American history

We didn’t realize it at the time. We probably didn’t buy it either. The album sold about 2,500 copies its first year.

The Freewheelin’ Bob Dylan changed that story. Other than “Corina Corina,” Dylan wrote all its songs and as funny as “Talkin’ New York” may have been and as touching “Song to Woody” was,  Freewheelin’  showed Dylan’s genius blooming.

The album, produced by John H Hammond, has a minimalist sound that concentrates our listening to Dylan’s lyrics. To note the personnel is important nonetheless:

Each of these musicians deserve separate recognition. A personal favorite is Bruce Langhorne, the inspiration for Dylan’s “Mr Tambourine Man.”  (follow above link)

As memorable as each of the album’s songs is, Don Hunstein‘s cover photo is equally so. Hunstein first began as an amateur photographer while in the Air Force and stationed in Europe. His interest became a hobby and after returning to the US and living in New York City, his hobby became a profession. As with so much in life, his timing was serendipitous.

Rock and roll was in a growth spurt and Hunstein landed a job at Columbia Records. Also lucky for Hunstein, Columbia recognized Hunstein’s talent and had him take pictures not just for albums, but of artists while recording. In their casual most human moments.

That is what he re-created for The Freewheelin’ Bob Dylan. Though posed, the photo presents Dylan and Suze Rotolo, his then girlfriend, as if in a candid moment.

In a 2008 NY Times article, Rotolo said of the photo, “He wore a very thin jacket, because image was all. Our apartment was always cold, so I had a sweater on, plus I borrowed one of his big, bulky sweaters. On top of that I put a coat. So I felt like an Italian sausage. Every time I look at that picture, I think I look fat.”

Freewheelin’ was more than a moment. It was a prediction. Dylan would record two more albums in its style before going rogue in 1965 and quitting work on Maggie’s farm. That choice changed the American music scene as much as any single event in the history of American music and in many cases, 20th century Western civilization.

How many roads must a man walk down
Before you call him a man?

The words turned out to be a prediction of Dylan’s change of artistic direction. Many fans hated 1965 because of that change.

Decades later, we can list dozens of songs we’d not have with us if it weren’t for that change and Dylan’s freewheelin’ attitude.

As Stephen Thomas Eriwine writes in his All Music review: It’s hard to overestimate the importance of The Freewheelin’ Bob Dylan, the record that firmly established Dylan as an unparalleled songwriter, one of considerable skill, imagination, and vision.