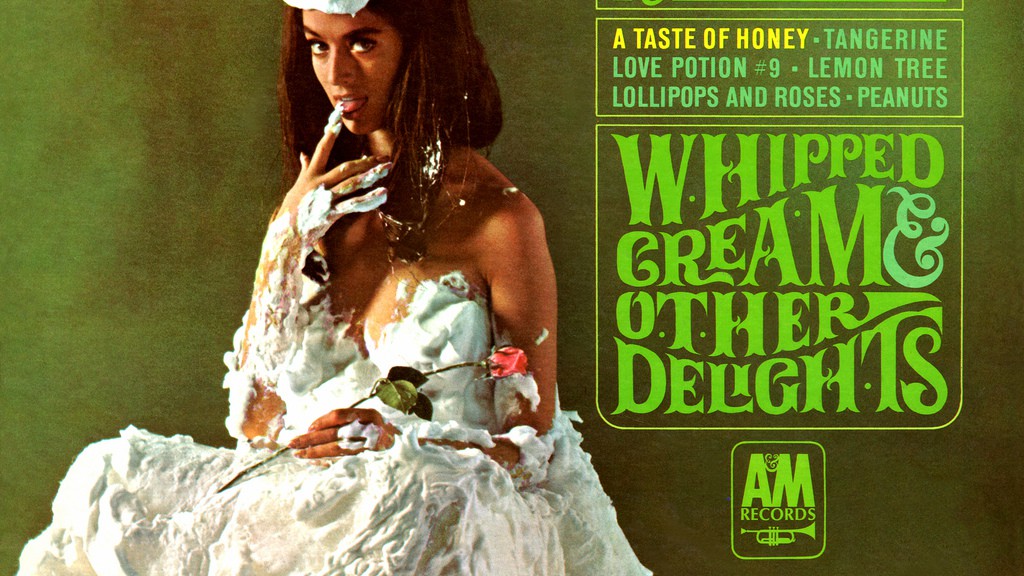 We stood in record stores and flipped through albums starting at A and hoped we had the time to get to Z. Homework be damned. Dentist be damned. World be damned. So much to look at. So many wishes to make.

Sometimes we flipped over the album to read the back. Some covers we stared and searched.

Whipped Cream and Other Delights we stared. Maybe we’d missed something the last time.

On February 19, 1966  Herb Alpert’s Whipped Cream and Other Delights became the Billboard #1 album. The record spent 141 weeks on Billboard’s Top 40 albums chart and its cover an eternity in the minds of those then adolescent boys.

In  2006 a New Yorker magazine article explained the cover’s impact saying that it “fogged the minds of many young men, as they gazed at the… personalized come-hitherhood to the woman staring back … the inner portion of a bare breast protrudes from the foam. She is licking cream from the index finger of her right hand… in the virtually pornless atmosphere of the suburban mid-sixties it was … the pinnacle of allure.”

Who was this visage?  Model Dolores Erickson . And we didn’t know it then, but the picture was taken when Erickson was three months pregnant. During concerts, Herb Alpert would tell the audience, “Sorry, we can’t play the cover for you!”

Spoiler alert: it is not whipped cream, but shaving cream. Whipped cream just wouldn’t have worked under the lights needed for the shot, although it is apparently actual whipped cream on Erickson’s head.

And underneath? Erickson said in an interview, “I was wearing a bikini, and there was a cotton cloth that went around my body.”

The outtakes for the album were given to Erickson in 1965 and she still has them. She was shocked at how much it revealed, but by today’s standards they are rather modest.

Because Erickson was not one to walk around partially nude covered in shaving cream, the cover did not make her life everyday-famous. She later retired from modeling and went on to become an artist.

She sometimes appears at record and collectibles shows.