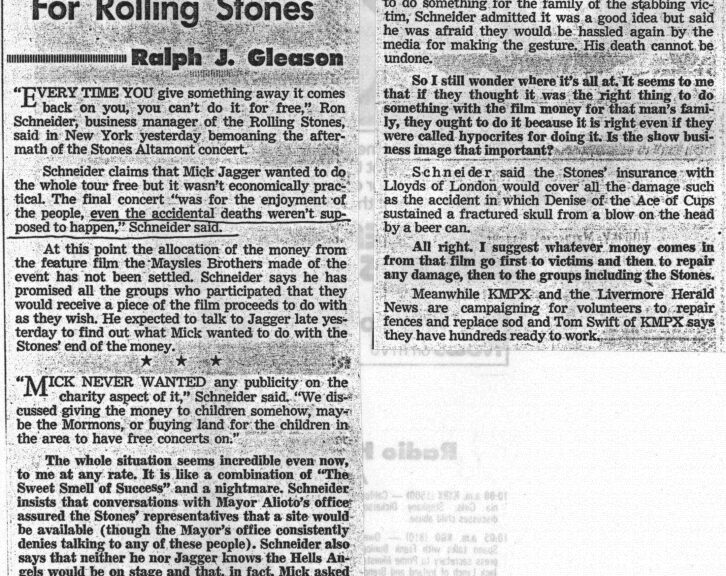 It is an extraordinary Rolling Stones bookend: December 6, 1968 and December 6, 1969. The Stones released Beggars Banquet on the former date. The album was a return to a more rock sound than the previous Satanic Majesty’s Request of 1967. 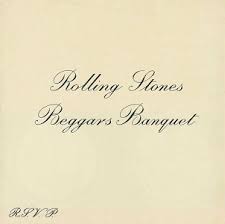 The more popular the band, the more it seemed to attract media criticism and the band rewarded the critique with more to criticize. The first cover, the cover that the record companies immediately dismissed, was a dirty bathroom wall full of  graffiti. It was always a Rolling Stones banquet of needling their detractors.

A year later was Altamont.

After nearly two years off the road, the Rolling Stones first show for their 1969 American tour was on November 7 in Fort Collins, CO at the Moby Gymnasium.  It was the first of 16 stops in 22 days and the first of 23 shows as some dates had two shows. One of those shows included the Ed Sullivan Show on November 23.

The last date was in Boston Garden.  Along the way, they added the Palm Beach Pop Festival.

…and then came the idea for a free concert. Not a new one for them as in July they’d given a free show in London’s Hyde Park. The concert was a success, an entirely peaceful event financed and filmed by Granada Television.

1969. The year of so many festivals crowned with the Woodstock Music and Art Fair. And exactly one year after the Stone’s Beggars Banquet release, it was time for Woodstock’s odd uncle: the Altamont Free Concert, at the Altamont Speedway in Livermore,  CA.

There had been criticism of ticket prices for the Stones’ concerts and the idea of giving  free concert, a la the many that had happened for years by San Francisco bands, had an appeal.

At that time, Sam Cutler managed the Stones. When the idea of a free concert began, Cutler visited the Dead in bucolic Novato, the rural spot the Dead spent much or their time.  Cutler states that the idea emanated from Grateful Dead manager Rock Scully. Like old times at the Golden Gate State Park’s free concerts, the Stones would join the Dead and the Airplane there.

Golden Gate was unavailable (a Chicago Bears–San Francisco 49ers football game at Kezar Stadium, located in Golden Gate Park, made that venue impractical). The venue was then changed to the Sears Point Raceway. And when that site fell through, Altamont Speedway was chosen.

Also involved were the Diggers, a San Francisco-based collective who, in their words,  combined street theater, anarcho-direct action, and art happenings in their social agenda of creating a Free City. Their most famous activities revolved around distributing Free Food every day in the Park, and distributing “surplus energy” at a series of Free Stores (where everything was free for the taking.)

The Hell’s Angels were also involved. Who invited them, what their purported role was, and how were they compensated are still questions that have several proposed answers.

Construction began on December 4, just two days before the event and we all know how prepared Bethel, NY was with only two weeks to prepare there. For example, lights were scheduled to be attached to towers but the lights never arrived. There was no real divide between the stage and the audience. That space was controlled by the Angels.

A 2019 New Yorker article reported that rock critic Greil Marcus, who was then in his mid-twenties, got there early in the morning. “I went right to the front and sat down with the person I’d come with,” he told writer Sasha Frere-Jones. “It felt perfectly safe, except for acid casualties, and then the Angels, but people were unfriendly, territorial, selfish—just a weird reversal of Woodstock, where I’d been just a few months before.

He added, “Four or five plainclothes Alameda County sheriffs stood around backstage, their weapons in their holsters. After intervening in one of the early fights between the Hells Angels and fans, they took note of how thoroughly outnumbered they were, and thereafter ceded the field to the Angels.”

Also [from Wikipedia]: At one point Jefferson Airplane…Marty Balin is knocked out by a Hells Angel; Paul Kantner in response: “Hey, man, I’d like to mention that the Hells Angels just smashed Marty Balin in the face, and knocked him out for a bit. I’d like to thank you for that.” To which a Hells Angel sitting on stage grabs a microphone, and replies: “You’re talking to my people. Let me tell you what’s happening. You, man, you’re not happening!”

That violence, captured in the film Gimmie Shelter by by Albert and David Maysles and Charlotte Zwerin , shows how attempts to control the crowd failed. What happened? Wherever that answer lays  Hell’s Angel Alan Passaro stabbed spectator Meredith Hunter, Jr to death in a melee.

The Dead began to sense that the concert’s challenges and disorganization would be too much to handle, too much of a hassle. Bill Kreutzmann said he’d rather not and soon after the  band decided to drop off  the bill.

There was a huge media backlash and finger pointing following the concert. Even today, the most common description heard about Altamont was that it was the death of the 60s. The demise of peace and love. The death of the barely-born Woodstock Nation.

On December 10, respected music critic and Dead supporter Ralph J Gleason wrote in the San Francisco Chronicle: “Why did  Grateful Dead people and other locals involved go wrong with the idea? Now it is ended in murder and that was a murder, not just a death like the drowning or the hit and run victims. Is the the new community? Is this what Woodstock promised? Gather together as a tribe, what happened? Brutality, murder, desperation. You name it. The name of the game is money power and ego. Money is first and it brings power.”

Grateful Dead lyricist Robert Hunter typically wrote songs that were difficult to pin down, that were subject to various interpretations. Not uncommon with writers, but on December 20,  only two weeks after the the failed concert, the Dead premiered  New Speedway Boogie.  It was Hunter’s response to the response to Altamont. He hadn’t been there. He’d been at the movies seeing Easy Rider.

While the “speedway” referred to is the one at Altamont, there is also a Speedway Meadow at Golden Gate Park. Hunter often used imaginary place, think Fennario, in his songs, and so he was allowing that for this one as well.

This Darkness Got to Give 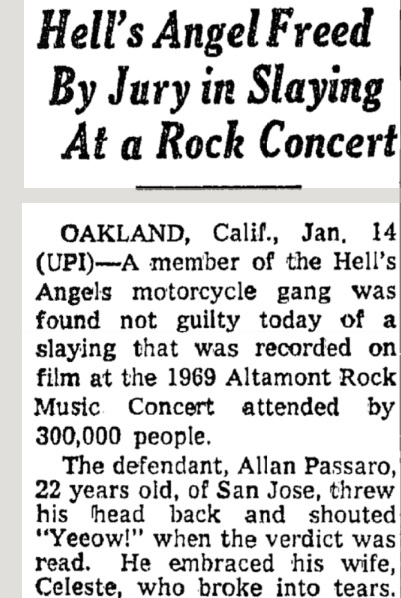 The murder trial stemming from an incident ended 13 months later on January 19, 1971 when the jury declared Hell’s Angel Alan Passaro “not guilty” in the stabbing death of 18-year old Meredith Hunter. [NYT story]

In 1977, Greil Marcus wrote, “A young black man murdered in the midst of a white crowd by white thugs as white men played their version of black music—it was too much to kiss off as a mere unpleasantness.”