In the early 1960s, people were watching TV more and listening to radio less. In July 1964, the Federal Communications Commission (FCC) adopted a non-duplication rule. That meant that FM radio stations in cities of more than 100,000 people could no longer simulcast the programming of their AM counterparts. Stations fought the rule and delayed implementation.

March 21, 1965: a record growth of FM radio was reported at the opening session of the annual convention of the National Association of Broadcasters, but a controversy developed over what course the high-fidelity medium should pursue. More diversity in music? Did FM need more bop and and less Bach?   (FM needs more bop and less Bach)

March 28, 1965: a column appeared in the NYT about how television had made inroads into the radio audience, but soon New York listeners will likely have more to listen to.

March 28, 1965: overshadowed by the more spectacular doings of television, radio had interesting and hectic days ahead. New York City metropolitan area listeners were probably not aware in the fall there would be nine “new” radio stations for half of the program day. 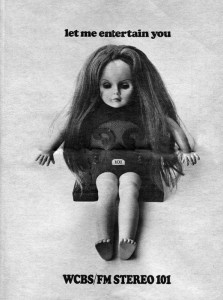 December 13, 1965,  the Federal Communications Commission announced that it would give consideration to requests from radio broadcasters seeking exemption from the simulcast rule. (NYT article)

It seemed to take forever and still by June 8, 1966 there are indications that NY “Music lovers in the Metropolitan area will be singing the praises of the Federal Communications Commission on Jan. 1.” 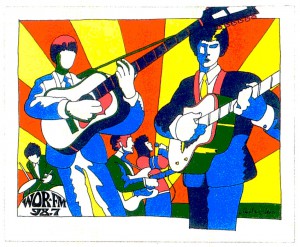 July 31, 1966: WOR-FM  began running a free form progressive rock format for most of its broadcast day. There were no DJs at first because management was unable to come to an agreement with  AFTRA (the union that represents on air talent).

October 8, 1966, WOR-FM disc jockeys started. A NYT article led with: Radio station WOR-FM, which has been broadcasting rock ‘n’ roll music without interruption by announcers, will add the chitter-chatter of four disk jockeys, beginning tomorrow. A station official asserted, however that WOR-FM would not become a “screaming station.” (article: Oct 7, 1966…djs start)

Here’s a taste of it on one of Rosko’s shows:

Ironically, on October 2, 1967, Rosko resigned over corporate interference with his choices of music. (”When are we going to learn that controlling something does not take it out of the minds of people?” and declaring, ”In no way can I feel that I can continue my radio career by being dishonest with you.” He added that he would rather return to being a men’s-room attendant.

But he continued of course. How many of you learned the name Kahil Gibran from him?

A great site with lots of NY radio history is the NY Radio Archive site. Check it out sometime.