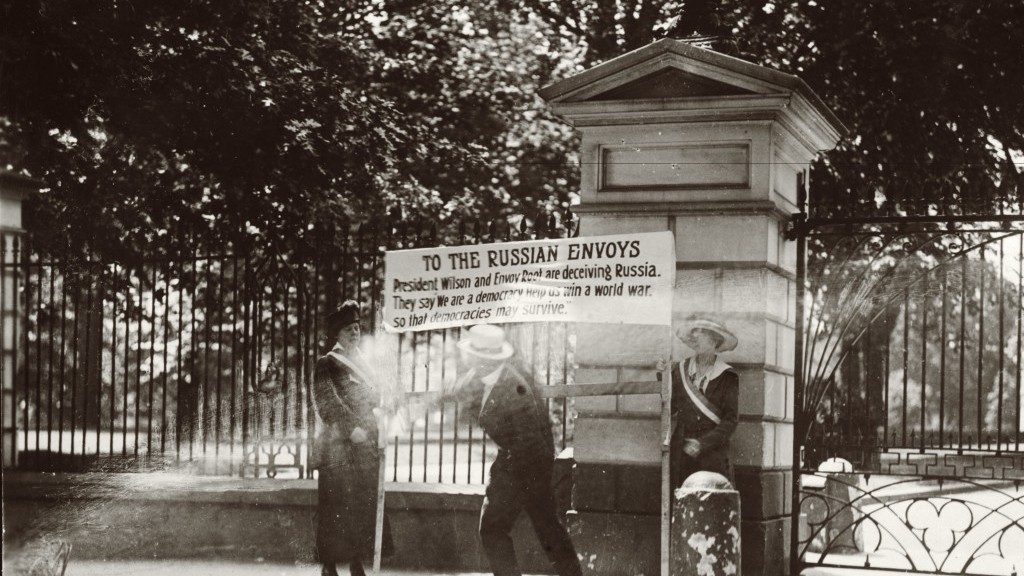 On November 21, 1913 that the courts fined suffragist Lucy Burns $1 for chalking the sidewalk in front of the White House (NYT article). Lucy Burns was not a familiar name to me until I dug deeper into why the 1960s were what they were.

Lucy Burns was born on July 28, 1879 to an Irish Catholic family in Brooklyn, New York. Studying in Europe, Burns became involved in the British suffragist movement.

In London, on November 11, 1909, police arrested Alice Paul, a fellow American, for throwing stones through a window at the Guildhall while the Lord Mayor’s banquet was in progress. Inside the hall, Burns found Winston Churchill, waved a tiny banner in his face, and asked him, “How can you dine here while women are starving in prison?”

Four years later, in April 1913, back in the United States Alice Paul and Lucy Burns founded the Congressional Union for Woman Suffrage . In 1916, Burns helped organize the National Woman’s Party.  She advocated the cause of “votes for women,” she organized, lobbied, wrote, edited, traveled, marched, spoke, rallied and picketed.

1917 was a pivotal year in the suffragist movement. Women continued to demonstrate in front of the White House trying to get President Wilson to change his view on the right of women to vote. On June 20, 1917, targeting the Russian envoys visiting President Wilson, Burns and Dora Lewis held a large banner in front of the White House that stated: “To the Russian envoys: We the women of America tell you that America is not a democracy. Twenty million American women are denied the right to vote. President Wilson is the chief opponent of their national enfranchisement…Tell our government it must liberate its people before it can claim free Russia as an ally.”

An angry crowd destroyed the banner, but despite the crowds’ attacks, Burns arrived two days later with Katharine Morey carrying a similar banner; police arrested them for obstructing traffic.

Burns wrote that going to prison for picketing would be “the last whack of a hammer…” She served more time in jail than any other suffragists in America. She was arrested in June 1917 and sentenced to 3 days; arrested in September, 1917 and sentenced to 60 days. In October 1917, declaring their status as political prisoners, Burns and 13 other suffragists, initiated a hunger strike at Occoquan Workhouse to protest the unjust treatment of Alice Paul. Her strike lasted almost three weeks. Responding to increasing public pressure and the likely overturning of prisoners’ convictions on appeal, on November 27 and 28, government authorities ordered unconditional release of Alice Paul, Lucy Burns, and 20 other suffrage prisoners.

And on December 6 – 9, 1917, at the Conference of National Women’s Party officers and National Advisory Council in Washington, D.C., the suffrage prisoners were each presented with a special commemorative “Jailed for Freedom” pin. From the Sewall Belmont site: In 1920, exhausted from constant campaigning, Lucy declared at a meeting that she would fight no more and said, “…we have done all this for women, and we have sacrificed everything we possessed for them.” She was not present when Paul unfurled the victory banner at headquarters. Burns spent the rest of her life in Brooklyn, caring for her family and working with the Catholic Church. One of the bravest and most militant members of the National Woman’s Party, Lucy Burns’ articulate speeches, supreme leadership and brilliant strategizing greatly contributed to the achievement of woman suffrage.

Today the Lucy Burns Institute continues her struggle. From that site: The Institute is named in honor of Lucy Burns, a suffragette who helped to organize the National Woman’s Party in 1916. In her work to advocate the cause of “votes for women,” she organized, lobbied, wrote, edited, traveled, marched, spoke, rallied and picketed. When she was eventually arrested for her activities, she led a hunger strike in prison and was ultimately force-fed. She knew that being able to participate in a democracy by voting was an essential way to express our human dignity. For this goal, she was willing to fight and suffer.

The clip below is a piece of a speech that Emma Watson gave at the UN in 2014. The past is prologue.