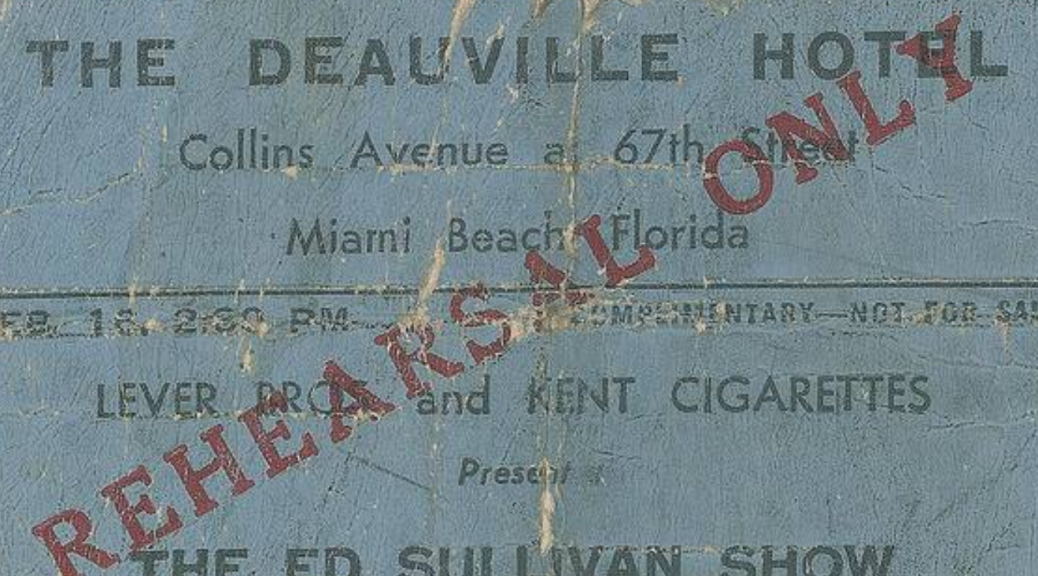 A week ago I noted the anniversary of the Beatles on Ed Sullivan Show, the first time that the Beatles appeared live on American television.

The Beatles had endured a snow storm after their first Sullivan appearance and had to take a train to Washington, DC for their first American concert (The Beatles Meet Washington) on February 11. They flew back to NYC the next day to appear at Carnegie Hall.

The next day, they flew down to Miami. After the miserable weather of New York and Washington, Florida’s weather was a welcome respite.

There, they appeared on Ed Sullivan again. Again live, but this time at the Deauville Hotel where they were staying.

From the Beatles Bible site: One week after their record-breaking debut on The Ed Sullivan Show, The Beatles made their second live appearance.

A rehearsal took place at 2 pm, which was filmed but not broadcast.

The performance took place at The Beatles’ Miami hotel, the Deauville, from 8pm-9pm, in front of an audience of 2,600. CBS had given out 3,500, and police had to calm angry ticket holders who were denied entry.

There were some tech hiccups at the start. Paul’s mic isn’t turned up enough and John’s was set too low, but all recover and the Beatles, who’ve likely had to deal with far more serious issues, completed the three songs.

Remarkably, given the ratings success of their appearance on 9 February, The Beatles did not top the bill this time; Mitzi Gaynor was the headliner. Also on the bill was Myron Cohen, and boxers Joe Louis and Sonny Liston  were both in the audience at the Deauville.

The Beatles performed six songs: She Loves You, This Boy, All My Loving, I Saw Her Standing There, From Me To You and I Want To Hold Your Hand.

The show was watched by an estimated 70 million people in 22,445,000 homes, and was repeated on 20 September 1964 at 8 pm. After filming the hotel’s owner, Maurice Lansberg, gave a party for the performers and crew who worked on the show; the food included lobster, beef, chicken and fish.