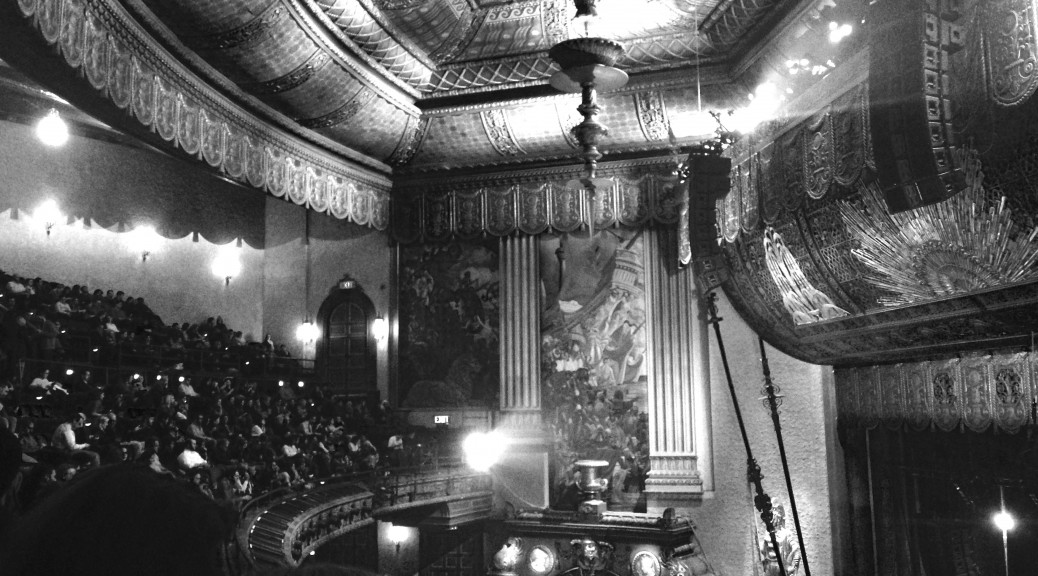 My wife and I have been fans of Glen Hansard since seeing him the 2007 movie “Once” (NYT article). Glen and his co-star Marketa Irglova won the Oscar® for Best Original Song (“Falling Slowly”) from that movie.

The movie became a play and my wife and I saw it. The play won Tonys in 8 categories, including Best Musical in 2012. (NYT article)

By 2015 we figured was about time we saw Glen Hansard live after hearing so much of his music in movies, plays, and both studio and concert recordings. We finally did just that on December 1, 2015. It was about time.

I am equally embarrassed to say that  this was our first visit to the famed Beacon Theater. We have to get out more.

How many artists do you know who can stand in front of a sold-out theatre audience, sing without any amplification or accompanying instrument, and fill the house with a great voice. Gen Hansard can do that.

At other times, there were as many as 11 musicians on the stage, as well as the indefatigable peripatetic guitar technician Nick (the only tech I know who the audience called to the stage for an ovation). Two string players, a three-man horn ensemble, a piano player (who used both the keys and the strings), second guitar, drums (amazing with simply a basic kit), bass, a guest fiddle, and Glen. At times it was just Glen.

But Glen Hansard, no matter how many or few were on stage with him, always filled the hall with amazing sound. And he gave each of the band members a chance to shine. A great night.

The night ended with the whole band, Nick, and the stage crew standing side-by-side singing a capella “The Auld Triangle.” The whole audience stood and sang along. It was the best singing audience (without ever being obtrusive) I’ve ever heard.

Here’s a video to a similar encore from a 2013 Hansard Concert Muziekcentrum Enschede, The Netherlands.

Get to see him the next time you can. Thank you Glen.

Postscript: we saw Glen again on September 14, 2016 at Carnegie Hall. Another great concert in another famed hall. Unlike the Beacon (which we still have not gotten back to), we’ve been to Carnegie Hall before.

And we saw him again in January 2018 at the Town Hall in NYC.

A nice habit to develop.