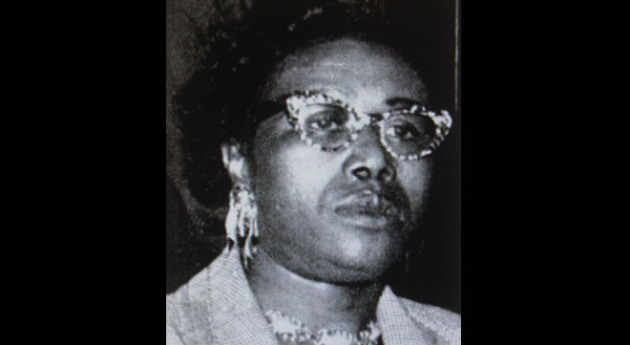 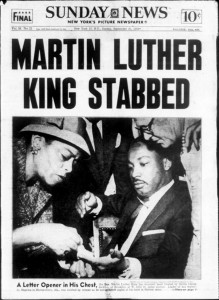 Boomers remember the day that James Earl Ray assassinated Martin Luther King, Jr. 1968 had begun with the disillusioning Tet Offensive and June 5 brought Sirhan Sirhan’s assassination of Robert Kennedy on the night RFK had mostly wrapped up the Democratic Party’s nomination for president.

When Ray assassinated King, it didn’t bring surprise or shock so much as worry and wonder. When would the violence end?

Martin Luther King, Jr (29 years old) was in New York City signing copies of his recently published book, Stride Toward Freedom: The Montgomery Story in Blumstein’s department store. Izola Ware Curry was on line with others who were waiting for King to sign a copy of the book.

Izola Ware Curry was a woman with mental illness. The illness prevented her from holding a job. She moved regularly in hopes of finding a permanent job and living in a permanent location.

When she came up to King she asked him if he was Martin Luther King, Jr. When King replied yes, she said, “I’ve been looking for you for five years,” then stabbed him in the chest with a steel letter opener.

NYPD officers Al Howard (31 and on the force for 3 years) and Phil Romano (a rookie) responded.  Someone wanted to pull out the opener, but very luckily for King, Howard told her not to and told King, “Don’t sneeze, don’t even speak.”

Cops didn’t carry radios at the time and so Howard had to use a phone.  There was also a crowd issue. Howard devised a plan. He announced that people must clear a path to the front door and began to move in that direction, but Officer Romano and other carried King out the back door to an ambulance.

At the Harlem Hospital, chief of thoracic and vascular surgery John W. V. Cordice, Jr., and trauma surgeon Emil Naclerio [who had been attending a wedding and arrived still in a tuxedo] were the first to treat King. They  inserted a rib spreader, making King’s aorta visible.

Chief of Surgery Aubre de Lambert Maynard then entered and attempted to pull out the letter opener, but cut his glove on the blade; a surgical clamp was finally used to remove it.

While it may seem that a letter opener is not necessarily a very dangerous weapon, had Curry’s thrust gone any deeper it would have hit King’s aorta and likely killed him.

When King later spoke of the incident, he sometimes told about how many letter of encouragement he’d received. Even from President Eisenhower and Vice President Richard Nixon. But he typically spoke about a letter that a high school student from White Plains, NY sent:

With gallows humor, King always closed the telling by saying, “And I’m glad I didn’t sneeze, too.” He  referred to the letter the day before Ray assassinated him.

A grand jury indicted Isola Curry, but psychiatrists found her too ill to be responsible for her actions. She first went to Matteawan State Hospital for the Criminally Insane, near Poughkeepsie, N.Y. She remained there for some 14 years. She was later institutionalized for about a year at the Manhattan Psychiatric Center on Wards Island, in the East River. She lived in a series of residential-care homes before entering a nursing home in Queens, NY.

When Howard retired, he and his partner Mona Lopez took over the Showman’s jazz club, now located  at 375 West 125th Street in Harlem. They ran it for nearly 39 years until COVID shut down so much.

In September 2020, Howard and Lopez flew to Las Vegas, a regular trip for them, but on the way home Howard fell sick. It was COVID and he died on October 21 . His funeral was held October 27 at J. Foster Phillips Funeral Home in Jamaica Queens. He was buried at The Evergreens Cemetery in Brooklyn, New York.