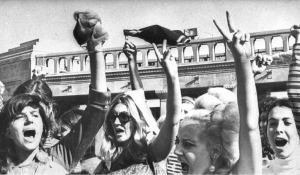 Time’s passage allows society to mistakenly think that something is new when it is not. The feminism of the 1960s may have seemed like a new movement, but of course 19th and early 20th century Suffragists such as Lucy Burns had in many ways a more difficult time (see Suffragists Tortured).

That era is known as the first wave of US feminism. [see Four Waves of Feminism article]

By the early 1960s, alongside the civil rights movement, women again marched and raised their voices to demand equality in the face of hypocrisy.

That “all men [and women] are created equal.”

Boomer moms and their daughters 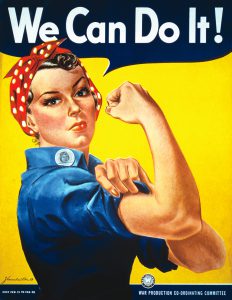 As had happened during World War I and more so in World War II, many women realized that while being a homemaker was an acceptable choice, so were all the other occupations.

More and more women entered college and not just to get their MRS. You can see by the chart below that while the number of men and women with a Bachelor’s degree continued to increase for both sexes, it was in the 1960s that woman began to outnumber men.

Robin Morgan, Carol Hanisch, Shulamith Firestone, and Pam Allen founded New York Radical Women in the fall of 1967 in New York City. The women viewed the hierarchy of protest groups to be male-dominated and that that hierarchy kept women in subservient positions rather than allowing them to have positions of power.

The NYRM’s first action was on January 15, 1968 with in led a protest event, a “burial of traditional womanhood.” held in Arlington National Cemetery.

The action was also a counter-protest to the  Jeannette Rankin Brigade peace march in Washington D.C. That march was a gathering of women’s groups protesting the Vietnam War as grieving wives, mothers, and daughters. The Radical Women rejected the protest. It said it was simply a reaction to those who governed the male-dominated society.

The New York Radical Women’s held their most famous protest on September 7, 1968 at the Miss America contest in Atlantic City.

The group called the pageant a “cattle auction” and displayed a “Women’s Liberation” banner. Most famously, women placed into a trash can bras, girdles, Playboy magazines, mops, and other items representing their oppression.

They did not burn the items.