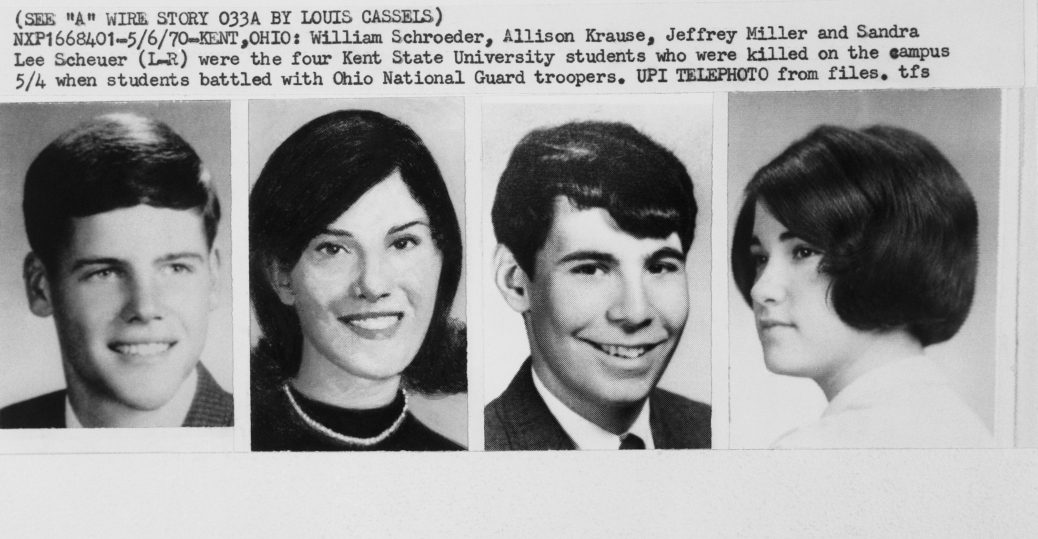 The fuse is lit

On May 4, 1970, life ended suddenly and horribly for Allison Krause, Jeffrey Miller, Sandra Scheuer, and William Knox on the Kent State (OH) campus.

Like any historic event, the story was not a spontaneous one. The story had a lead up.

Ohio Governor James A Rhodes, first elected in 1963, had what was known then as a “law and order” view of unrest.

Less than year before the tragic shootings at Kent State, the SAC [Special Agent in Charge] of the Cincinnati Bureau [FBI] sent [FBI Director] Hoover a memo detailing Rhodes’ attitude towards civil unrest: “He personally feels that the Director is the outstanding American and that he is the only person who has consistently opposed those persons who would subvert our government. He feels that the Director’s stated position of dealing firmly with these groups is the only sensible method.”

“He [Rhodes] commented on the riots and unrest which have occurred repeatedly and said that some of this might well have been avoided if the Director’s warnings and advice had been followed. In Ohio, he has not hesitated to use the National Guard to deal with these situations and has instructed the Guard to act quickly and firmly. He feels that this is the only way to maintain law and order, and that the maintenance of law and order is the only way our government can survive,” the memo records. [my emphasis]

Keep in mind the days preceding May 4.

As promised by the newly-elect President Nixon, the Vietnam War seemed to be winding down. Then in late April of 1970, Nixon ordered the US invasion of Cambodia and widened the Vietnam War. Nixon announced the invasion on April 30, l970.

The next day student protests erupted on many college campuses. Kent State University was one of those place and announced plans for a second rally noon Monday 4 May.

Saturday 2 May. Kent Mayor Leroy Satrom asked Governor Rhodes to send in the Ohio National Guard. Stationed close by, the Guard arrived that evening to the burning of the University’s ROTC building.

Sunday 3 May. About 1000 Ohio National Guardsmen occupied the campus, While tense, the mood was not threatening. Student quietly conversed with Guard members. It was on this day at a press conference that Ohio Governor James A Rhodes called the anti-war protesters “the worst type of people we harbor in America, worse than the brown shirts and the communist element.”

That evening confrontations between protesters and guardsmen occurred and once again rocks, tear gas, and arrests characterized a tense campus.

May 4 was simply another day in most ways. People awoke. Ate breakfast. Began their day.

“ABC” by the Jackson 5 was Billboard’s #1 single.  Ironically, Simon and Garfunkel’s “Bridge Over Troubled Water” was the #1 album.

The tragedy of May 4 would leave us perplexed, shocked, and with many questions.

Did the National Guard need to shoot? Were their lives in danger? Why were between 61 and 67 shots were fired in a 13 second period? Should the Guard have been on campus to begin with?

The 418 page Scranton Committee Report on the event determined that “The indiscriminate firing of rifles into a crowd of students and the deaths that followed were unnecessary, unwarranted, and inexcusable.”

No legal proceedings ever found the Guard culpable and the January 1979 monetary settlement paid out of court by the State of Ohio was termed an apology, not an admission of guilt.

Regardless of any possibilities, for Allison Krause, Jeffrey Miller, Sandra Scheuer, and William Knox life ended suddenly and horribly on May 4, 1970.