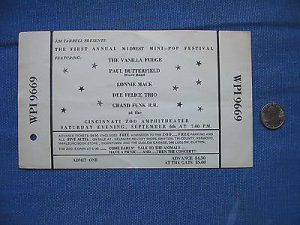 Simon and Garfunkel had released “At the Zoo” as a single in 1967, so I would not be surprised if the song helped inspire the location of the First Annual Midwest Mini-Pop Festival in 1969.

Jim Tarbell helped create the event (Tarbell later became a Cleveland councilman). He recalls, “That was on the heels of Woodstock. I had contracted with Hanley Sound, who did sound at Woodstock. The sound system came directly to Cincinnati after Woodstock. When it arrived, the crew was still caked in mud. We had Vanilla Fudge, the Paul Butterfield Blues Band, Grand Funk Railroad, Lonnie Mack and Elvin Bishop.”

Because I saw that Bill Hanley had done the sound, I contacted David Marks. David was at Woodstock and worked with Hanley sound. I asked him if he was in Cleveland with Hanley? Here are his responses: I was on the sound crew. Actually sang a song (disastrously) while the crowds were waiting for Grand Funk to pitch. Strange event. I’m sure Steve Wozniak had something to do with it? He may have helped Harold & Bill with some technical stuff.

I followed up with David and asked who “Harold” was and how Steve Wozniak was connected? Harold Cohen. Bill’s main technician & a much sort after sound mixer. I may be wrong but it would’ve been HC or Sam Baroda who mixed. SW? Not certain how but he bopped in & out of a few Hanley Sound festivals / events. I somehow think it was in Cincinntti Zoo I met him. I do recall Jim Ludlow who ran a club in which we installed a sound system… Ludlow’s Garage & us crew stayed at his house.

Unfortunately for Mini-Pop, it rained for the one-day event. The whole line-up was:

What you see above is what I’ve been able to find. As always, I’d love to hear from anyone who has any more information, especially if you were there.

In the meantime, what better lyrics to post than…