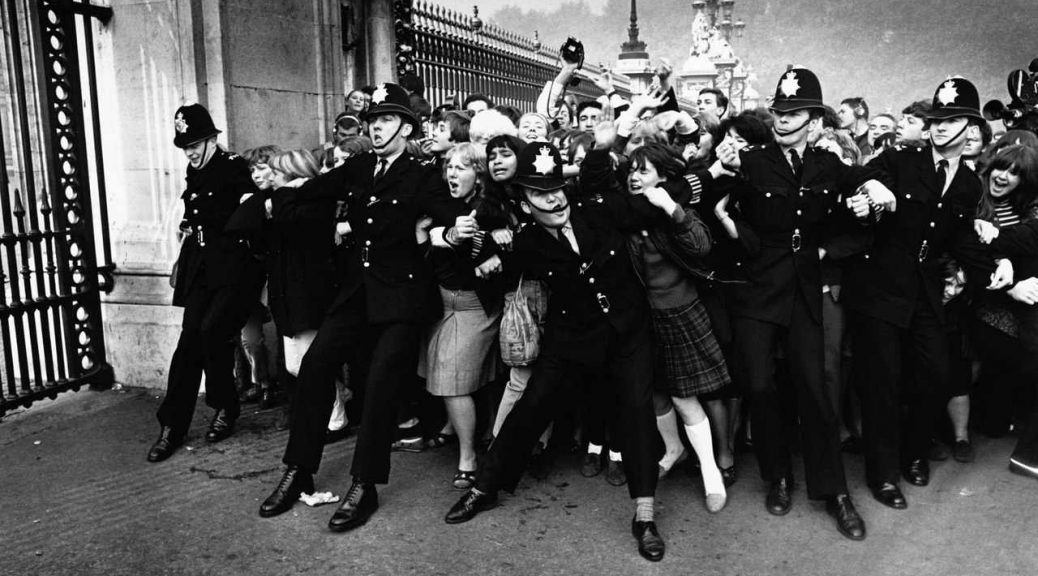 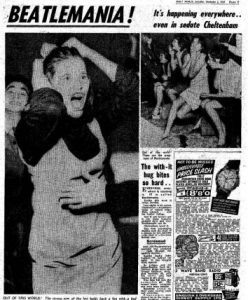 When we Americans think Beatlemania we typically think of their arrival, the 3 straight Ed Sullivan Show appearances, and the resulting cultural explosion.

It is important to keep in mind that the British Boomers were a bit ahead of us. Easily so, of course, since their media were playing and reporting about The Beatles before we had a hint.

By November 2, 1963, The Beatles had finally had the break out kind of success that any struggling band always hopes will happen, but no band could have foretold the success that descended upon them.

Despite their Cavern popularity, the Beatles began 1963 as they had ended 1962: touring as an opening band for higher billed musicians. With Brian Epstein as their manager and George Martin producing their music, success found them with the release of “Please Please Me” hitting #1 on the British charts on February 22.

Having said that, even on  March 3, 1963, they were still at the bottom of the bill  supporting a Helen Shapiro tour. Other acts ahead of them included The Kestrels, The Honeys, Dave Allen, Kenny Lynch and Danny Williams.

I know. Who were they? I don’t know either.

Also in March, they released their first album: Please Please Me.

In April, John became a father for the first time.

In May, “From Me To You” their second US release also charted poorly.

With continued British success, on August 3, 1963 they performed at The Cavern Club for the last time. 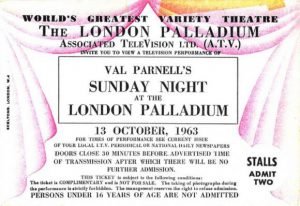 In October, the British youth aren’t just listening, they are screaming. Like any successful venture, being seen is a way of increasing that success and on  October 13, their appearance on Sunday Night At The London Palladium  as the top group in front of a TV audience of up to 15 million viewers lighted the very short fuse.

Brian Epstein arranged a Christmas show with the Beatles headlining. The show sells out in October.

More recording. A tour to Sweden.

On November 1, back in the UK, their third EP, The Beatles #1, is released using singles from their Please Please Me album. Side one contained I Saw Her Standing There and Misery. The second side featured Anna (Go To Him) and Chains.

That night their fourth British tour of 1963 opened at the Odeon Cinema in Cheltenham, Gloucestershire.

This was the group’s first series of concerts as unchallenged headliners. The Beatles topped a bill featuring five other acts: The Rhythm & Blues Quartet, The Vernons Girls, The Brook Brothers, Peter Jay & The Jaywalkers, and The Kestrels with MD Frank Berry.

The next day the Daily Mirror newspaper carried the headline: “Beatlemania! It’s happening everywhere.. even in sedate Cheltenham.”

According to Beatle expert Richard Ruskin’s Buskin with the Beatles Facebook page:

This date [November 1] in 1963 saw the start of The Beatles’ fourth UK tour, with two shows at the Odeon Cinema in Cheltenham, Gloucestershire (‘Gloss-ter-sheer’).
Headlining a bill that also featured The Rhythm & Blues Quartet, The Vernons Girls, The Brook Brothers, Peter Jay & The Jaywalkers and The Kestrels, the Fab Four performed ‘I Saw Her Standing There’, ‘From Me to You’, ‘All My Loving’, ‘You Really Got a Hold on Me’, ‘Roll Over Beethoven’, ‘Boys’, ‘Till There Was You’, ‘She Loves You’, ‘Money (That’s What I Want)’ and ‘Twist and Shout’.
Contrary to popular assertion, the following morning’s ‘Daily Mirror’ did NOT coin the term ‘Beatlemania’, but certainly helped introduce it to the general public – describing how, after “the with-it bug” had “swept Sweden” earlier in the week, it had now “hit sedate Cheltenham, traditional home of retired brigadiers, colonels… and the Ladies’ College.”
Buskin also provided this link with the boys at Cheltenham:

And you can follow this link for a 2013 Daily Beast take on the roots of Beatlemania.