Buried in the Deep

To many of the famished Irish, the light at the end of starvation’s tunnel–and a faint one at that–was a passage to America.  Some two million emigrated between 1845 and 1855.  Ireland’s population before the famine was about 8.5 million meaning that nearly a quarter of its population left in those 10 years.

Of course the poor cannot afford comfortable space aboard a ship. In fact, these poor literally became ballast. Ships bringing cargo to Europe found that these millions leaving were a source of both revenue and ship stability back across the stormy Atlantic.

The ships cargo area simply became living holds where disease spread quickly among those whose health was already poor. Their choice: to know they would die at home or the hope to survive an horrific trans-Atlantic journey.

Forsake:  leaving that by which natural affection or a sense of duty should or might have led us to remain

Once again, a soft acoustic guitar opens O’Rourke’s song and once again his playing belies his lyrics–but the bag pipe’s entrance removes the possibility of hope as hope slowly slips into the Atlantic’s depths and washes away the tears of the dead if not the living left behind. He nearly whispers:

The land where I was born is forsaken,

And I can no longer call it home

It’s no place for my family

(Ach o mo bhroin is Irish for “But for my grief”)

Until they died. Then the Atlantic became their grave. Buried in the deep.

When I die they’ll put me over

My dreams can go no further

We’re buried in the deep

Where hunger cannot find us.

The London Celtic Punks review says of the song: A beautiful song with Declan accompanied by harp and pipes on this stunning lament to those poor souls. Emotion spilling out it brought a flush to my cheeks as the realisation of what happened hits home. 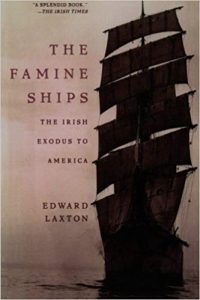 Farewell to you Erin…