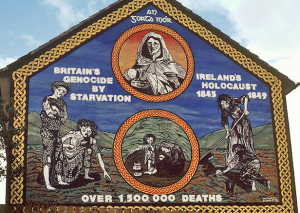 Along the Western Seaboard

A harp gently opens Along the Western Seaboard,  the second song on Declan O’Rourke’s Chronicles of the Irish Famine. An equally gentle acoustic guitar joins the harp.

And that is the album’s artful approach. If one didn’t understand English and only heard the melody, one would easily misinterpret the lyrics’ actual message: We begged, we prayed, but no one listened.

But you do understand English. The English may have stolen the Irish land, but the Irish stole the English language.

O’Rourke’s words tell the story so well, it is often difficult to continue–knowing we are listening to verified horror.

This song is told through the voice of a parish priest. The Irish population was  80% Catholic and naturally it turned to it for temporal succor.  Surrounded by suffering and the priest begs God for help:

When we need to feed so many, and there’s not even for the few

They are starving! They are freezing!

And their clothes have all worn through.

Since little help seemingly came from Above,  a few on terra firma did their best. The Great Emancipator Daniel O’Connell said to the House of Commons at the Famine’s height in 1847:

Ireland is in your hands, in your power. If you do not save her, she cannot save herself. I solemnly call upon you to recollect that I predict with the sincerest conviction that a quarter of her population will perish unless you come to her relief.

As was the case then (and too often the case now), the perpetrators–  the English–blamed the victim–the Irish– for their own misfortune.

The common view  by those “with” was that the Irish poor had brought about their own situation. Thus they deserved the tragedy and if the British were to assist them, it meant with many strings attached despite the reality that, “they have no strength to help themselves.”

Link to a London Celtic Punks site article which includes a performance of Clogman’s Glen.

One thought on “Declan O’Rourke Along Western Seaboard”