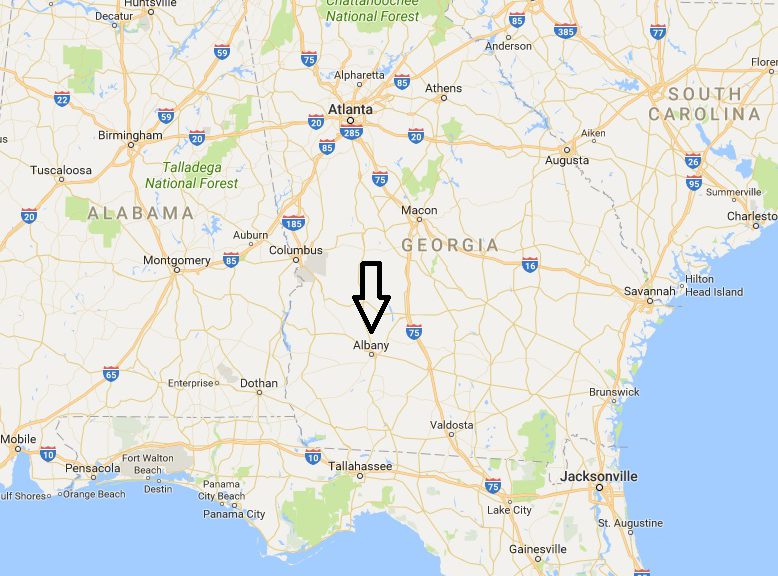 There were many American cities in which the black residents responded to their segregation, discrimination, and mistreatment in an organized way. The March to Montgomery is perhaps the most famous, but the demonstrations that took place in Albany, Georgia nearly four years earlier, were equally historic.

Sherrod and Reagon organized workshops around nonviolent tactics for Albany’s African American residents in anticipation of a showdown with the local police.

November 1, 1961: the day the Interstate Commerce Commission’s new prohibition against segregated bus terminals was to go into effect. The Albany, Georgia bus terminal was located in the black section of town and on November 1st — with a neighborhood crowd watching — nine Black students attempted to use the terminal’s “white-only” facilities. As planned, they left  when ordered out by the police and then filed immediate complaints with the ICC under the new ruling.

November 17, 1961: A coalition of SNCC, the NAACP and Southern Christian Leadership Conference members organized a series of civil rights actions.

Police Chief Laurie Pritchett adroitly avoided confrontations that would bring unfavorable national publicity to him and the city. November 22, 1961: when Albany (GA) State College students went to the bus terminal to return home for the Thanksgiving holiday, an Albany State dean — whose job depended on the all-white Georgia Board of Regents — was stationed there to direct them to the “Colored” waiting room.

Five young people — 3 from the NAACP Youth Council and 2 from Albany State — defied the dean and the orders of Police Chief Pritchett to leave the white waiting room. They were arrested. Bertha Gober, one of the Albany State students, chose to remain in jail over the holidays to dramatize their demand for justice.

After the Thanksgiving holiday, more than 100 Albany State College students marched from campus to the courthouse where they picketed to protest the trial of those arrested at the bus depot. A mass meeting — the first in Albany history — packed Mt. Zion Baptist Church to protest the arrests, segregation, and a lifetime of subservience. At the end of the meeting they rise  to sing, “We Shall Overcome.” Student song-leader Bernice Johnson (Reagan) described the effect, “When I opened my mouth and began to sing, there was a force and power within myself I had never heard before. Somehow this music … released a kind of power and required a level of concentrated energy I did not know I had.”

Albany State students Bertha Gober and Blanton Hall were expelled for disobeying the dean’s orders to use the “Colored” waiting room. Students marched to the college President’s office to protest the expulsions and 40 more were expelled for disagreeing with the administration. Gober will later compose civil rights song, “We’ll Never Turn Back.”

December 10, 1961: nine Freedom Riders from Atlanta arrived at the Albany Trailways bus terminal and were met by a crowd of approximately three hundred black onlookers and a squad of Albany policemen. Chief Pritchett arrested the riders without incident, telling the press that white Albany would “not stand for these troublemakers coming into our city for the sole purpose of disturbing the peace and quiet in the city of Albany.”

December 11, 1961:  over four hundred people marched to city hall in downtown Albany, protesting the arrest of the Freedom Riders. The city gave the marchers permission to circle the block twice, and when the marchers refused to stop after the allotted distance, Chief Pritchett ordered the protestors arrested. Herding the protestors into the alley between police headquarters, Pritchett arrested 267 protestors. Pritchett informed the press that “We can’t  tolerate the NAACP or the Student Nonviolent Coordinating Committee or any other ‘nigger’ organization to take over this town with mass demonstrations.”

December 15, 1961: going against some of his Southern Christian Leadership Conference advisers, King accepted an invitation to Albany, Georgia and speaks at a rally in support of activists that had be arrested the previous day.

December 16, 1961: New York Times: The Rev. Dr. Martin Luther King Jr., 264 other Negroes and one white youth were arrested today as they marched on City Hall for a prayer demonstration. All were jailed. There was no violence, despite the tension aroused by week-long racial controversy and the breakdown of negotiations between white and Negro leaders aimed at restoring this city of 56,000 persons to normal. December 18, 1961: an agreement was reached that paved the way for the release of the King and about 300 other Negroes from prison.

January 5, 1962: Groups protested to state and college officials regarding the dismissal of students from Albany State College for participating in anti-segregation demonstrations.

March 26, 1962: the original Freedom Riders arrested in December went on trial. Charles Sherrod was beaten to the floor for sitting in the “white” section at the front of the courtroom and white SNCC activists Bob Zellner, Per Laurson, Sandra & Tom Hayden were violently dragged from the courtroom when they sit in the “Colored” section at the rear. (NYT article)

July 10, 1962: Martin Luther King Jr and Ralph Abernathy, convicted of having violated a street and sidewalk assembly ordinance without a permit on December 16, 1961, went to jail to emphasize their nonviolent defiance of racial barriers. They had been given the choice of a $178 fine each or 45 days in jail. They choose jail.

July 12, 1962: King’s and Abernathy’s fines were anonymously paid and the two men were reluctantly freed. Years later it was revealed that Albany Mayor Asa Kelley paid the fines as a ploy to divide the movement and diffuse media attention on King’s imprisonment. Defying that injunction, 160 protesters were arrested.

July 22, 1962: Martin Luther King Jr. said that Federal District Judge J.Robert Elliott was engaged to an extent in a “conspiracy” to maintain segregation.

July 24, 1962: Chief Judge Elbert P Tuttle of the US Court of Appeals for the Fifth Circuit overturned the ban on demonstrations, stating, “The trial court had no jurisdiction to enter this order at all.” Later that day, the Albany police dispersed a crowd of 2,000 protestors.

July 25, 1962: Martin Luther King Jr. canceled plans to lead a mass demonstration and declared a day of penance for the previous night’s outbreak of violence.

July 26, 1962: WG Anderson, president of the Albany Movement, warned that the group would give a “lesson” to white officials who had spurned repeated requests for negotiations over demands for desegregation of public facilities.

August 1, 1962: JFK responded to a reporter’s question about the protests in Albany, Georgia. Kennedy stated that he is staying updated on the situation through reports from Attorney General Robert Kennedy. The President argued that the Albany City Commission’s refusal to negotiate with African American citizens is “wholly inexplicable.” [video]

August 11, 1962: Albany shut down its three public parks and two public libraries after small groups sought to desegregate them.

August 28, 1962: Albany police arrested and jailed seventy religious leaders from the North and Midwest during an anti-segregation protest at the City Hall.

September 12, 1962: Martin Luther King Jr. decried the pace of civil rights progress in the United States. He also said that “no President can be great, or even fit for office, if he attempts to accommodate injustice to maintain his political balance.

September 25, 1962: a pre-dawn fire at St. Matthew’s Baptist Church in Macon, Georgia destroyed the building. It was the fifth black church to burn over the past month.

November 18, 1962: Martin Luther King, Jr accused agents of the Federal Bureau of Investigation in Albany, Ga., of siding with the segregationists. “One of the great problems we face with the FBI is the South is that the agents are white Southerners who have been influenced by the mores of the community. To maintain their status, they have to be friendly with the local police and people who are promoting segregation. Every time I saw an FBI man in Albany, they were with the local police force.”

March 7, 1963: the Albany City Commission voted 6 – 1 to repeal all segregation ordinances. The Commission also voted 4 – 3  to re-open the library after being closed for seven months, though the city removed the chairs to prevent blacks and whites sitting together.

No action was taken regarding the city’s tennis courts, swimming pools, park recreation areas and teen centers which had been closed at the same time.

March 9, 1963: four black girls took seats at a white lunch counter at Albany Lee Drugs. There were asked to leave and the police were called. The girls were arrested a block away and charged with violating an antitresspassing ordinance.

March 12, 1963: five Black high school-age girls were turned away from two white theaters by the assistant manager for the chain. “We don’t want your business,” the manager told them.

March 13, 1963: Blacks resumed a 16 month fight against segregation in Albany, GA realizing that the March 7 announcement was simply a legal ploy.

A NYT article quoted Police Chief Pritchett, “I don’t know of anything for them to be overjoyed about. You look around and see if anything’s integrated and if it is, call me, will you?”

June 21, 1963: Albany, Georgia police temporarily closed all black businesses and banned blacks from sidewalks after an attempted walk by blacks toward the white shopping district for a sit-in at a lunch counter.

Three of the children registered at one elementary school and two at another. All were accompanied by their parents.

June 4, 2011: President Barak Obama presented the Presidential Medal of Freedom to Charles Sherrod and his wife Shirley at the celebration of the 50th anniversary of the Southwest Georgia Project in Albany.