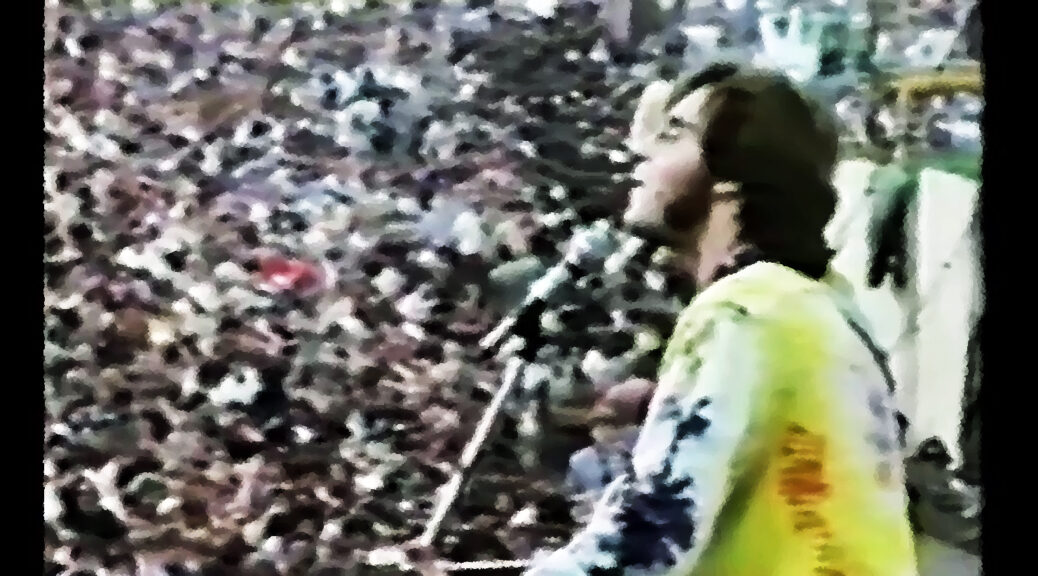 Other than music and rain, it seems the Woodstock’s one common thread was the nearly constant between-set requests to those who had climbed on the light towers to please come down. Whether it was Chip Monck or John Morris doing announcements, there was always a typically polite request to get off the towers.

And so Monck did several times before John Sebastian, an unscheduled guest, the third of the festival (Melanie and Country Joe), and the second of the day appeared.

John was a spectator. Not planning on playing,  but ready and willing to jump in and help out. He performed solo.

How Have You Been Reprise Records would not release John’s first solo album, John B Sebastian,  until January 1970, but three of the five songs he sang would be on that album. This was one.

Because the songs were still young, because John was still young (25), because life at Woodstock was often enhanced, the published lyrics of songs and the lyrics John sang do not always co-inside.

“Thank you. I don’t know how amazing you look, but you’re truly amazing, you’re a whole city. And somehow you’re something that an awful lot of us talked about 8 and 10 years ago in little living rooms…I have a song for you.” John Sebastian

He begins singing a cappella, then uses his guitar.

How have you been my darling children,
While I have been away in the west?
Though you are strangers,
I feel that I know you.
By the way that you treat me and offer to feed me and eagerly ask if I’ll stay for a rest.
Now sit yourselves down in a pile here before me.
I wish I had presents for each of your smiles.
I have been traveling,
Without much to carry.
Just a broken guitar case with tape on the sides,
A bag and a few signs to help me get rides.
Here are some beads from a throat of a princess,
Who reigned in the years ’round 200 BC.
Divide them and wear them,
And make sure you share them.
Because I want you to have them in hopes that’ll be,
As lovely as the lady who gave them to me.
Here is a strange European guitar string,
I found on the floor of a Club in Marseilles.
It’s fat for the third string and too skinny for the fourth string.
But I keep in hopes I may use it someday,
It’s funny how people just keep things that way.
Here is a turtle from a Long Island Expressway.
Says that his home has been covered with tar.
So I gave him a ride on the back of my suitcase.
And he wants to stay here in your yard,
At long his life won’t be quite so hard.

How have you been my darling children?

Rainbows All Over Your Blues

Rainbows All Over Your Shoes was also on John’s first album. John tells a story about having just coming back from California and living in a tent there. That a woman taught him how to tie-dye and John is one of the two performers (Joe Cocker being the other) who prominently wore tye-dye clothing, unlike most in the crowd where little if any such style could be found.

“A cloth house is all you need if you got love.”

I’ve been waitin’ my time, just to talk to you
You been lookin’ all down at the mouth, and down at your shoes
Well bay – ee – aby, I come to give you the news
I’ll paint rainbows all over your blues
I heard you been spendin’ a lot of your time, up in your room
And at night you’ve been watchin’ the dark side of the moon
You don’t talk to nobody, if they don’t talk to you
So Buddy and me came here to sing you a tune
I give up, is all you’ve really got to say
Well, it’s time to find a new life style
‘Cause this really ain’t the way
Let’s go for a bounce on my trampoline
I can show you the prettiest mountains that you’ve ever seen
You better run to your closet
And fish out your blue suede shoes
‘Cause I’ll paint rainbows all over your blues

I Had A Dream

His third song is the third of the three that would appear on that aforementioned solo album.

In many ways, John’s heartfelt spoken words sum up the sense that “we” had arrived and it was special.

“Far out. Far around. Far down. Far up. I’d like you to hear a tune about…I guess about those discussions that I was talking about that I seem to have had in so many small circles of friends around living rooms, around pipes when they weren’t selling no papers on the street and we weren’t walking around this beautiful green place…smokin’ and ah…not being afraid. This is about all of us. I love you people.” Sebastian had, as everyone there was well aware, been the leader of the very successful Lovin’ Spoonful spectators call out such requests. His next song was one of their hits.

“Oh man, there’s a half a million people and they’re all singing a hundred songs. I tell you what, I’m gonna’ sing a song that’s a kind of a goodbye song…but it’s not a all-the-way goodbye song. It’s just that ah…it’s kinda’ like a 15-20 minute goodbye song because we’re all here and we’re gonna stay here, let it all keep on happening. Stay here until it’s over.”

The crowd applauded as soon as he began to strum the well-known song. I had learned the word “dawdled” from this song

He told the crowd that they were all beautiful, but Chip Monck asks him back as the crowd continues to cheer and applaud.

“Oh boy. This is really a mindfucker of all time. I’ve never seen anything like this, man…just love everybody around ya’ and clean up a little garbage on your way out and everything gonna’ be alright. The press can only say bad things if there ain’t no fuckups.”

He dedicates the song to the announcement that someone was having a baby saying, “This kid’s gonna be far out.”

Why must every generation think their folks are square
And no matter where their heads are they know mom’s ain’t there
‘Cause I swore when I was small that I’d remember when
I knew what’s wrong with them that I was smaller than
Determined to remember all the cardinal rules
Like sun showers are legal grounds for skipping school
I know I have forgotten maybe one or two
But  I hope that I recall them all before the baby’s due
And I know he’ll have a question or two
Like “Hey Pop, can I go ride my zoom
It goes two hundred miles an hour suspended on balloons
And can I put a droplet of this new stuff on my tongue
And imagine frothing dragons while you sit and wreck your lungs”
And I must be permissive, understanding of the younger generation
Then I’ll know that all I’ve learned my kid assumes
And all my deepest worries must be his cartoons
And still I’ll try to tell them him all the things I’ve done
Relating to what he can do when he becomes a man
And still he’ll stick his fingers in the fan
And “Hey, Pop, my girlfriend’s only three
She’s got her own videophone and she’s taking L.S.D.
And now that we’re best friends she wants to give a taste to me
But what’s the matter Daddy, how come you’re looking man?
Can it be that you can’t live up to your dreams?”