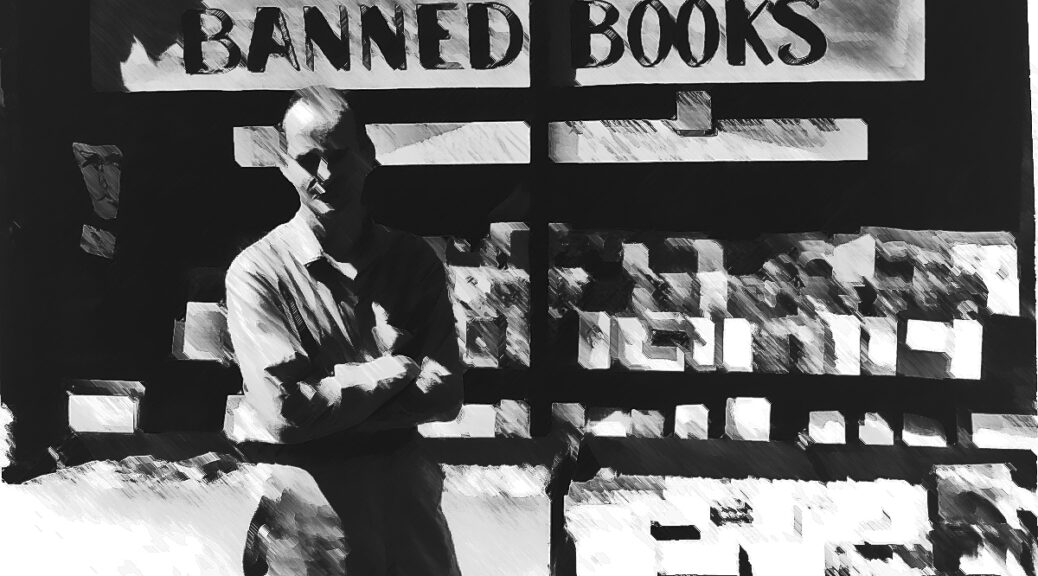 This site springs from my having attended the Woodstock Music and Art Fair, my being a volunteer at Bethel Woods Center for the Arts, and doing an assignment on protest music.

What I immediately found out with the assignment was protest music had roots deep in the 20th century and branches into the 21st  and that I’d need to put the music in context.

Context is a wide concept and many people, places, and events come under it.

From the City Lights site: Lawrence Ferlinghetti wrote poetry, translation, fiction, theater, art criticism, film narration, and essays. Often concerned with politics and social issues, Ferlinghetti’s poetry countered an elitist conception of art and the artist’s role in the world. Although his poetry is often concerned with everyday life and civic themes, it is never simply personal or polemical, and it stands on his grounding in tradition and universal reach.

On March 5, 1946, less than a year after the Allied victory in Europe,  ominous signs already pointed to future conflicts. Winston Churchill, the United Kingdom’s  Prime Minister, condemned the Soviet Union’s policies in Europe and declared, “From Stettin in the Baltic to Trieste in the Adriatic, an iron curtain has descended across the continent.”  [full text]

The new normal had a new name: the Cold War.

On January 17, 1961 even outgoing President Eisenhower, a conservative, a Republican, and a World War II hero spoke of that the new military buildup and both that path’s pitfalls and its consequences.

In his farewell address to the nation, Eisenhower warned  Americans to be aware a developing and worrisome post-war  relationship between the government and the private sector.

He understood the need for having a prepared military (a lesson learned from World War II), but he was troubled about “the acquisition of unwarranted influence…by the military-industrial complex.”   Eisenhower worried that the entangled cooperation between the government, its military, and industry could weaken or destroy the very institutions and principles it was designed to protect.

Military-industrial complex: another new term in the World’s new normal.

In the wake of the War’s end, some young Americans were disenchanted, not with the victory over Fascism, but with the path down which that victory led us.

Their reaction was both a repudiation and an avowal. Repudiating the pursuit of materialism (the more you have he more successful you are, the better a person you are) and searching in other directions: Easter religions, use of psychedelics,  sexual liberation, organic diets, and other non-conformist attitudes.

The Beats are most often associated with their writers:   Herbert Huncke, Allen  Ginsberg,  William S. Burroughs, Lucien Carr, and Jack Kerouac — who met in 1944 in and around the Columbia University campus in New York City.

Kerouac (who also credits Huncke) is credited with the use of the word “beat” to refer to the view. It fit nicely both with its common meaning as with beaten or tired, but with a poetic twist, it also calls forth the idea of beatific and upbeat.

Society mocked such views and easily demonized those who pursued them. In the 50s, adding -ik to anything connected it with Bolshevik, Sputnik, and all its negative Communist associations.

Because of its perceived subversiveness, New York City unsuccessfully tried to ban folk musicians from playing in Greenwich Village’s Washington Square in the early 1960s.

But, I’m getting off the topic of Ferlinghetti. Context.

Lawrence Ferlinghetti was born on March 24, 1919 in Yonkers, NY. Carlo Ferlinghetti from Brescia, Italy and Clemence Mendes-Monsanto a French-Portuguese Sephardic Jew. Lawrence was the fifth Ferlinghetti son. His father had died six months earlier. He was in his 50s and suffered a heart attack on the stoop of his house.

His mother suffered depression and his Aunt Emilie and her husband (his mother’s brother) took him in and they moved to France, near Strasbourg. He forgot English and learned French. He lived there until he was three.

They returned to New York in 1922. The uncle disappeared, Aunt Emilie couldn’t provide for Lawrence, so the state placed him in an orphanage for a year. He returned to live with Emilie in a year as she had found work as a governess for Presley and Anna Bisland, but in 1926 she disappeared. The family he was living with sent him to Riverdale School for Boys.  He was 5½.

A couple of years later, the family had Lawrence live with a Zilla Larned Wilson, an unrelated widow. in Bronxville. He then attended public school and did well, particularly when he joined basketball and was part of its championship team.

But he also found friend who found stealing fun.  From a Wall St Journal article: Anna Bisland stepped in and sent me to Mount Hermon School in Massachusetts. When I was there, it was a farm school. The students—mostly missionaries’ sons—worked in the barns and fields. Mount Hermon was a tough academic school. I was exposed to poetry for the first time, and T.S. Eliot was a big inspiration.

He attended Chapel Hill University in North Carolina as Lawrence Ferling where he majored in journalism and received his AB in 1941.  He began his career in journalism by writing sports for The Daily Tar Heel, and he published his first short stories in Carolina Magazine, for which Thomas Wolfe had written.

After graduation and before Pearl Harbor, he joined the Navy. As a Lieutenant Commander he was part of the Normandy invasion and later arrived in Nagasaki shortly after the atomic bomb was dropped. Those experiences became the basis for a lifelong antiwar view.

After the war, he attended Columbia University and in 1947 received his MA in English literature. He then received his Doctorate de l’Université de Paris (Sorbonne) in 1950. He had met his future wife, Selden Kirby-Smith, on the ship sailing over, who was also going to attend the French university.

His dissertation, in French, was about images of cities in modern poetry.

Ferlinghetti went to San Francisco in 1951 where he taught French in an adult education program, painted, and wrote art criticism. He was  joined there by his fiancée, Selden, known as Kirby, and the two were married. The marriage would last until 1976 and produced two children, Julie and Lorenzo.

In 1953, he and Peter Martin, the publisher of City Lights magazine–named after the 1930 silent film by screen comedian Charlie Chaplin–opened City Lights bookstore in San Francisco’s North Beach. It was  the country’s first all-paperback bookstore as a way to provide easier access to quality literature. It was also a gathering place for the neighborhood and other writers.

They hired Shigeyoshi “Shig” Murao as a clerk. Murao worked without pay at first, but eventually became manager of the store and was a key element in creating the unique feel of City Lights.

“I saw the best minds of my generation destroyed by madness, starving, hysterical, naked” 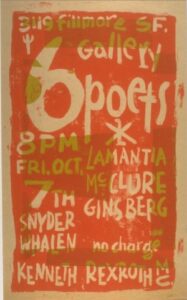 In 1955, Ferlinghetti launched City Lights Publishers. His own career as a poet began with publication of Pictures of the Gone World in 1955.

On October 7, 1955, he was at the Six Gallery in San Francisco when Allen Ginsberg gave the first reading of “Howl.”

Anyway I followed the whole gang of howling poets to the reading at Gallery Six that night, which was, among other important things, the night of the birth of the San Francisco Poetry Renaissance. Everyone was there. It was a mad night. And I was the one who got things jumping by going around collecting dimes and quarters from the rather stiff audience standing around in the gallery and coming back with three huge gallon jugs of California Burgundy and getting them all piffed so that by eleven o’clock when Alvah Goldbrook was reading his poem ‘Wail’ drunk with arms outspread everybody was yelling ‘Go! Go! Go!’ (like a jam session) and old Rheinhold Cacoethes the father of the Frisco poetry scene was wiping his tears in gladness.

Ferlinghetti asked Ginsberg for the manuscript promising to publish it.  Ferlinghetti had launched City Lights Publishers in 1956, he published Allen Ginsberg’s Howl.

From a Guardian article]: Before publication Ferlinghetti…[gave]…a manuscript to the American Civil Liberties Union asking them for support if he was prosecuted. The ACLU agreed. When a batch of books was seized by US Customs [on 25 March 1957] he was arrested for importing obscene literature. “They had been printed in England because it was much cheaper and much better quality. But when they grabbed them, we were ready.”

Those charges would be dropped, but on June 3, 1957, two undercover San Francisco police officers arrested Shig Mauro for selling a copy of Howl and Other Poems. He would say, “Imagine being arrested for selling poetry!”

On October 3, 1957 Ferlinghetti won the case when California State Superior Court Judge Clayton Horn decided that the poem was of “redeeming social importance”

Horn’s opinion was that the State had not proved beyond a reasonable doubt and to a moral certainty that the book was obscene and that the defendants had wilfully an dlewdly committed the alleged crime.

The decision stands a a cornerstone of free speech and is as important as Judge John M. Woolsey  in United States vs One Book Called “Ulysses” on December 6, 1933.

Ferlinghetti was 38 at the time of the Howl victory.  He would live for another 63 years and though his fame may sprout from that trial, he continued to be a spokesman for free speech and described as the spiritual father of the Beat movement.

Thank you for your moral strength and steady example.