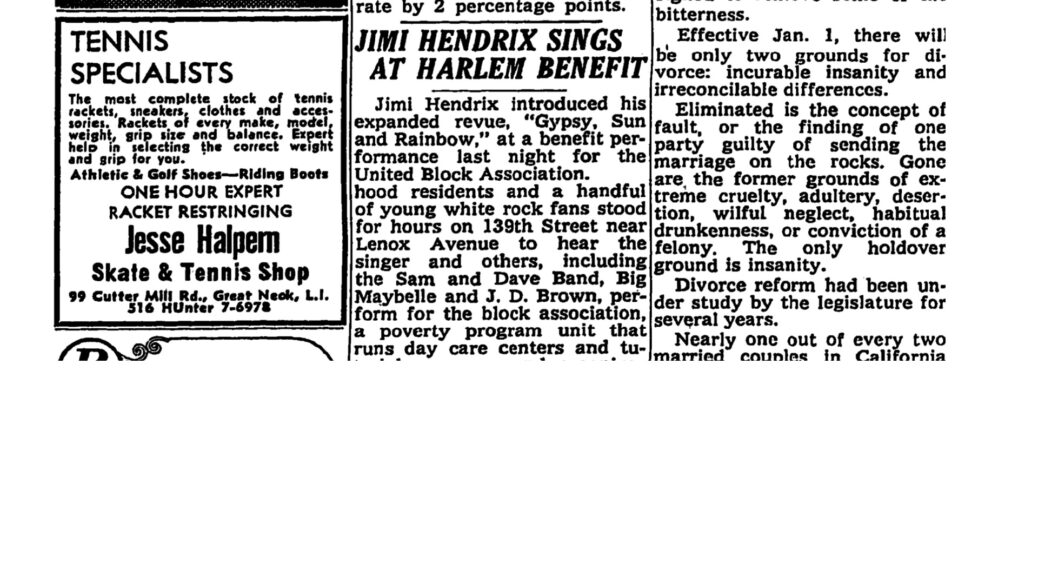 At the Harlem Street Fair

For Black-American musicians in the 1960s, big $ucce$$ typically meant making white people fans, but it was the white fans who–consciously or unconsciously–who helped prop up the the American apartheid system that had existed for centuries.

So too for Jimi Hendrix. Jimi had played music since childhood and that love was a large part of the reason the Army let him go.

Following  that departure in 1962, Jimi struggled to find gigs and keep them. He often found himself on the so-called “Chitlin Circuit,” the venues throughout the US, particularly the South, that Black bands were able to play. Jimi played (and quit and rejoined and quit…) and sometimes recorded with Little Richard, King Curtis, Don Covay, Buddy and Stacey, Frank Howard and the Commanders,  Curtis Knight and the Squires,  blond bombshell Jayne Mansfield, Ray Sharp, the Icemen, Lenny Howard, and the Isley Brothers among others (see this Rolling Stone article to listen to some of those recordings) until he was “discovered” by Animal bassist Chas Chandler.

Chandler wanted Jimi to stand out in the trio Chandler mostly created.  Another issue was how to “sell” Jimi. His music while certainly rock was also blues, yet neither of those things.

Two white musicians, Mitch Mitchell (drums) and Noel Redding  (guitarist who had to learn bass). With them, the band’s image definitely leaned toward attracting a young white audience.

By 1969, Jimi Hendrix was the biggest name in rock and commanded  the biggest purses. Yet Jimi faced that predicament: as a Black musician how do I support the Black civil rights movement and remain successful?

And by 1969, Jimi also faced an artistic decision: does he continue to play his “hits” — like Foxy Lady,  Purple Haze, and Hey Joe — or does he follow his Muse to expand his style to include newer sounds?

And in trying to juggle all those choices, does a decision include his original two white bandmates?

The last “Jimi Hendrix Experience” show was on June 29, 1969 at the Denver Pop Festival.  According to a 2018 Open Culture article (quoting a 1969 Rolling Stone/Noel Redding interview) “Tensions had been building for months. Hendrix wanted to expand the band, without consulting Redding or Mitch Mitchell. Recording sessions for the double Electric Ladyland had been notoriously riotous. “There were tons of people in the studio,” Redding remembered, “you couldn’t move. It was a party, not a session.” Hendrix’s perfectionism had him pushing for 40-50 takes per song. But the problems weren’t all under his control. The three-day Denver festival…was beset with violence.

Noel Redding left and went on to play with the already formed Fat Mattress which had actually opened for some of the Experience’s shows.

Jimi’s next actual concert (he did a couple of TV appearances and jammed at the Tinker Street Cinema, Woodstock, NY) would not be until that famous Monday morning 18 August 1969 at the Woodstock Music and Art Fair.

In hopes that a location that had already inspired the likes of Bob Dylan and the Band, Mike Jeffery, Jimi’s slick manager, rented a an eight-room house in Shokan, NY, about 10 country miles from Woodstock, NY.

Jimi invited old friends Billy Cox and Larry Lee to join him there along with Juma Sultan and Gerardo Velez.  And Mitch Mitchell.

Their first gig would be the Woodstock Music and Art Fair and for the band members it was obvious that they needed to practice as a band.

Unfortunately for the band, Jimi took off to Morocco and did not return until August 6.

It was at Woodstock that MC Chip Monck understandably but incorrectly introduced the band as the Jimi Hendrix Experience with Jimi quickly but not necessarily clearing up the name by saying,  “Dig, we’d like to get something straight. We got tired of the Experience and every once in a while we was blowin’ our minds too much, so we decided to change things around and call it Gypsy Sun and Rainbows for short. It’s nothing by a Band of Gypsies.”

Not quite clearing it up.

As obviously Black and proud as Jimi was, the lack of recognition (literally) from the Black community bothered him. Driving around Harlem and certain that kids spraying a fire hydrant into passing cars would not do so recognizing him, Jimi was surprised they did when they didn’t.

Twin brothers Albert and Arthur Allen were two old friends and former apartment mates of Jimi. Their names in 1969 were TaharQu and Tunde Ra Aleem and they thought JImi could help solve his Black community image by playing at the famed Apollo Theatre which he had won an Amateur Night contest in 1964. The Apollo, fearful that a white audience would take over and deny locals the opportunity, declined the offer. 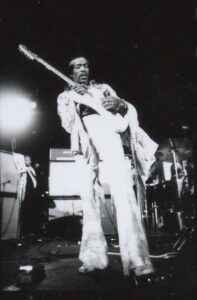 Instead the twins arranged a concert in support of the United Block Association. ..for free!

The day didn’t start well as Jimi’s guitar was stolen from his car that afternoon and only the Aleem twins’ Harlem connections facilitated its return.

The stage was on West 139th Street facing Lexington Avenue and about 5,000 showed up.  Some shouted at and  threw cups at Carmen Borrero, a light-skinned Latino and Jimi’s current girlfriend.

Just before Hendrix, Big Maybelle reputedly had the crowd dancing in the street and singing from the windows.

It was midnight by the time the band got on stage and the first to get on was Mitch Mitchell (boos). Jimi wore white pants (more boos, a few eggs, and a bottle).  He played fan favorites and introduced Voodoo Child as “Harlem’s National Anthem,” but the crowd kept leaving and by the end only a few hundred remained.

That was the end of Gypsy Sun and Rainbows. The Band of Gypsies trio followed with Jimi, Billy Cox (bass) and Buddy Miles (drums).

It was buddy Miles who had helped Jimi  make a direct connection with the black community.  Alafia Pudim, of Harlem rappers the Last Poets, was recording in the same studio where Hendrix was working with the Band Of Gypsys. Pudim turned up early, intending to record a street story about a pimp and his doomed hooker they knew. Miles, who was playing on Pudim’s session, helped to get Hendrix to play on the track:

Now, I was already high
And dressed very fly
Just standin’ on the corner
Watchin’ all the fine hoes
When up drove my main man big money Vann
In his super ninety-eight Olds Now as Van stepped out
And he looked about to me He began to speak
Came his real fine freak
She wore a black chemise dress
Considered to be one of the very best
Hair was glassy black
Eyes a deep see green-blue
Her skin boss dark hue
Man! She was some kind of fine!