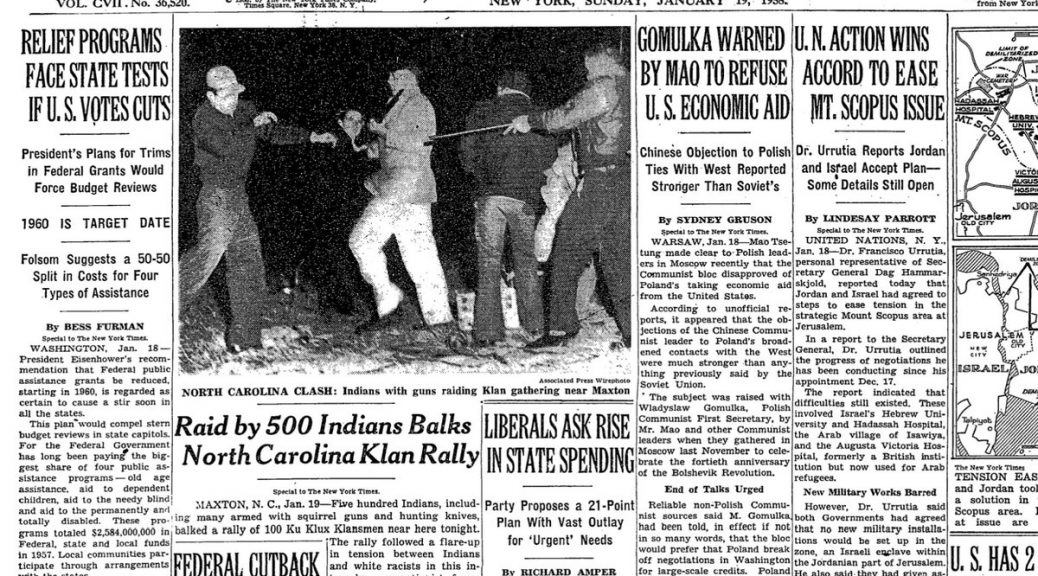 Cole decided to use that federal recognition to rile up North Carolina whites telling them that the recognition would lead to the Lumbee as whites and intermixing with “real” whites.

From the Black Then site: January 13, 1958; led by Cole,  Klansmen burned a cross on the lawn of a Lumbee woman in the town of St. Pauls, North Carolina as “a warning” because she was dating a white man. Emboldened, he gave a strong speech denouncing the “loose morals” of Lumbee women and warning that “venereal disease” could be spread to the white population by their noted promiscuity. The Klan then struck at Lumbee men, burning a cross at a tavern frequented by the Lumbee. Cole denounced the Lumbee men as “lazy, drunken and prone to criminal activity.” The Klan then burned a cross on the lawn of a Lumbee family who had moved into a white neighborhood as a final warning for the Lumbee to remain in “their” areas. On January 18, 1958, Cole, sensing success, organized a rally near Maxton, NC in a field near Hayes Pond thinking hundreds of supporters would arrive.

Approximately 50 to 100 came, but before the cross burning could begin, over 500 Lumbee attacked the Klan with rocks, sticks, and guns. The Klan fled. Four Klan members were wounded.

From Charlotte Action: The state patrol, who had been waiting about a mile away, moved in when gunfire broke out. Sheriff McLeod, who later said he didn’t want to be accused of defending the Klan by showing up early, helped find lost Klansmen in the bushes and directed them out of Robeson County. He also booked one Klansman for public drunkenness — the only arrest that night. The Lumbee celebrated and two of them, Charlie Warriax and World War II veteran Simeon Oxendine, wrapped themselves in the KKK banner.  Life magazine had a picture of the two as well as other photos.

From the North Carolina Museum of History: Later arrested for inciting a riot, Cole appeared before Lacy Maynor, the sole Indian judge in Robeson County. The Klan leader was convicted and sentenced to a year in prison.

The lyrics to the song include:

The headlights shone, the Klansmen stood
In circle brave and fine,
When suddenly a whoop was heard
That curdled every spine,
An Indian youth with steely eyes,
Sauntered in alone,
He calmly drew his shootin’ iron
And conked the microphone.

Another shot, the lights went out,
There was a moment’s hush,
Then a hundred thousand Lumbee boys
Came screaming from the brush.
Well, maybe not a million quite,
But surely more than four,
And the Klansmen shook from head to foot
And headed for the door.

Cole died in a traffic accident in July 1967.

On July 5, 2018, after asking permission of the tribe,  students from the University of North Carolina Pembroke erected an historical marker in Maxton, North Carolina, to commemorate the battle.

The Lumbee Tribe has still not received full tribal recognition from the federal government.