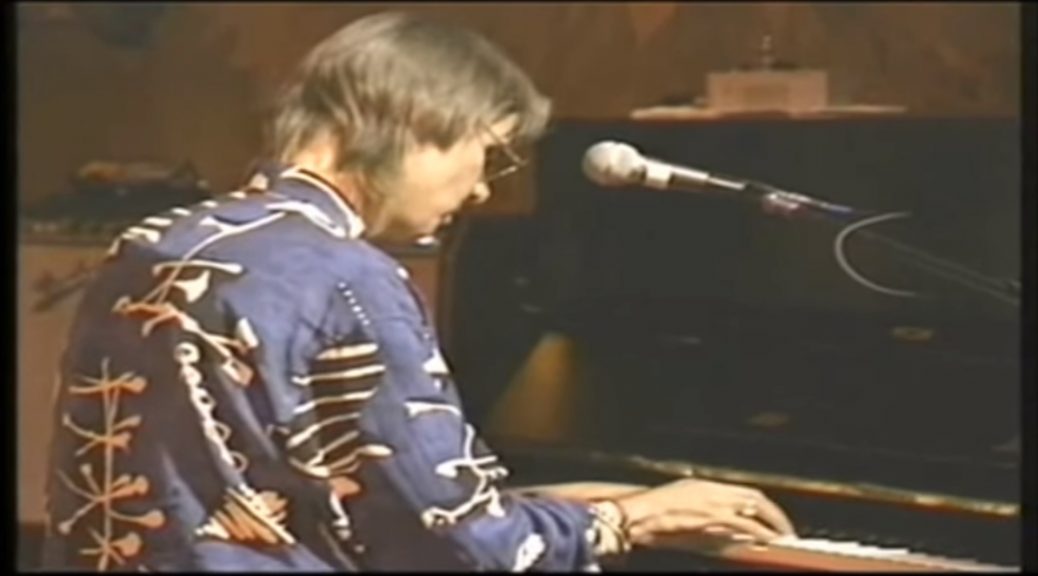 Soloff was born in Brooklyn and raised in Lakewood, NJ where he began studying piano at an early age. When he was ten, he took up the trumpet, eventually attending the Julliard Preparatory School and, later, the Eastman School of Music in Rochester, NY.

He became one of the most respected jazz musicians of his generation.

After one year of graduate school at Julliard, Lew became involved in the New York Latin jazz and jazz scene, playing with artists like Maynard Ferguson, Joe Henderson, Tito Puente and Gil Evans.

He joined Blood, Sweat and Tears in time to be part of their second album, Blood, Sweat & Tears (he replaced Randy Brecker). The album won GRAMMYs for Album Of The Year and Best Contemporary Instrumental Performance (“Variations On A Theme By Eric Satie”).

It is Lew Soloff who, at about the 2-minute mark, blasts away on Spinning Wheel and helped make it a hit. Here’s the vinyl version (with its bit of scratch and pop)

Blood, Sweat and Tears performed early Monday morning at the Woodstock Music and Art Fair after Johnny Winter and before Crosby, Stills, Nash (and Young).

For some artists, Woodstock was a pinnacle. Blood, Sweat, and Tears did not get much traction out of Woodstock as they did not appear in the movie or on the album, but they were already Grammy successful.

Soloff remained with BS & T for four more albums and remained in music playing with dozens of different bands for the rest of his life.

The Allmusic.com site synopsis states:  Soloff was closely associated with Gil Evans from 1973 on, and also played with George Gruntz’s Concert Jazz Band, the Manhattan Jazz Quintet, and Carla Bley; he was also teamed with the colorful trombonist Ray Anderson on several often-humorous recordings.

Daniel E Slotnick wrote in the New York Times, Mr. Soloff had little use for genre limitations. He was a session musician for Barbra Streisand, Frank Sinatra and Lou Reed; he was the lead trumpeter of both the Carnegie Hall Jazz Band and the Lincoln Center Jazz Orchestra; he tackled Bach as a member of the quintet Manhattan Brass.

The man play A LOT! Here is his discography at Wikipedia or here for the AllMusic list. Your fingers will tire.

Lew Soloff died of a heart attack in Brooklyn on March 8, 2015. His daughter, Laura Solomon, wrote the following at her Facebook page:

Tonight I lost my dad. We flew to New York to spend the week with him and my sister, enjoyed the day together, had dinner at our favorite grub spot. On the way home, he suffered a massive heart attack and collapsed into my arms on the sidewalk in front of my husband and children. I performed CPR with the help of a passerby and continued to assist after EMTs arrived. He died at the scene, was resuscitated, made it through an angioplasty but couldn’t stabilize afterward and passed away just before 1:00 AM.

My dad was amazing. He could drive me fucking crazy, but that didn’t make him any less essential to my life. He loved his grandkids. He loved my sister and me. He was one of the greatest trumpet players in the world and I’m so proud to be his daughter. I’m so happy to carry on a fraction of his musicality in the now rare moments that I pick up my violin.

Dad had more friends than anyone I know. He was always on the phone. Always. Even when it was totally inappropriate. He was so loved by so many. His life overflowed with people who cared for him. I am so thankful for you all.

I am devastated. I can’t picture my life or my kids’ lives without him in it. It doesn’t seem real. It’s definitely not fair. But I am so grateful to have spent my dad’s last day on Earth together in New York City.

Please keep my family in your thoughts and respect our privacy during this awful time. We’re hurting badly.

Lew Soloff performs the Hoagy Carmichael classic, “Georgia on my Mind” at the Velvet Note in Alpharetta, GA. Kenny Banks on piano, Che Marshall on drums and Kevin Smith on bass. Photographed and edited by Richard Angle.

In 1962 Marty renamed himself Marty Balin and began recording with Challenge Records, releasing the singles “Nobody But You” and “I Specialize in Love.”

Balin was the lead for the folk music quartet called The Town Criers, followed by a brief stint with the Gateway Singers in 1965.

On July 25, 1965, Dylan famously “went electric” at the Newport Folk Festival.  Deciding to do the same but getting refusals from the folk clubs, Balin opened the San Francisco Matrix night club on August 13, 1965 featuring his new band Jefferson Airplane. The Grateful Dead, The Doors, Big Brother and the holding Company, and Steve Miller all performed there. The Airplane and the Matrix helped create the San Francisco scene.

In August 1969, the Airplane famously played their sunrise set at Woodstock.

For personal, personnel, and musical reasons, Marty left the Airplane in April 1971. In a 1993 interview with Jeff Tamarkin of Relix Balid said “I don’t know, just Janis’s death. That struck me. It was dark times. Everybody was doing so much drugs and I couldn’t even talk to the band. I was into yoga at the time. I’d given up drinking and I was into totally different area, health foods and getting back to the streets, working with the American Indians. It was getting strange for me. Cocaine was a big deal in those days and I wasn’t a cokie and I couldn’t talk with everybody who had an answer for every goddamn thing, rationalizing everything that happened. I thought it made the music really tight and constrictive and ruined it. So after Janis died, I thought, I’m not gonna go onstage and play that kind of music; I don’t like cocaine.” (click >>> Relix interview)

Balin joined Airplane’s reconstructed Jefferson Starship in 1975 and remained with them until 1978. Afterward, he returned to his solo career, though he did join the band for reunions in 1989 and 1996

In 1996, Jefferson Airplane was inducted into the Rock and Roll Hall of Fame (Grace Slick was absent due to medical reasons). Most in jackets and ties, they performed “Volunteers” with Balin on lead vocals.