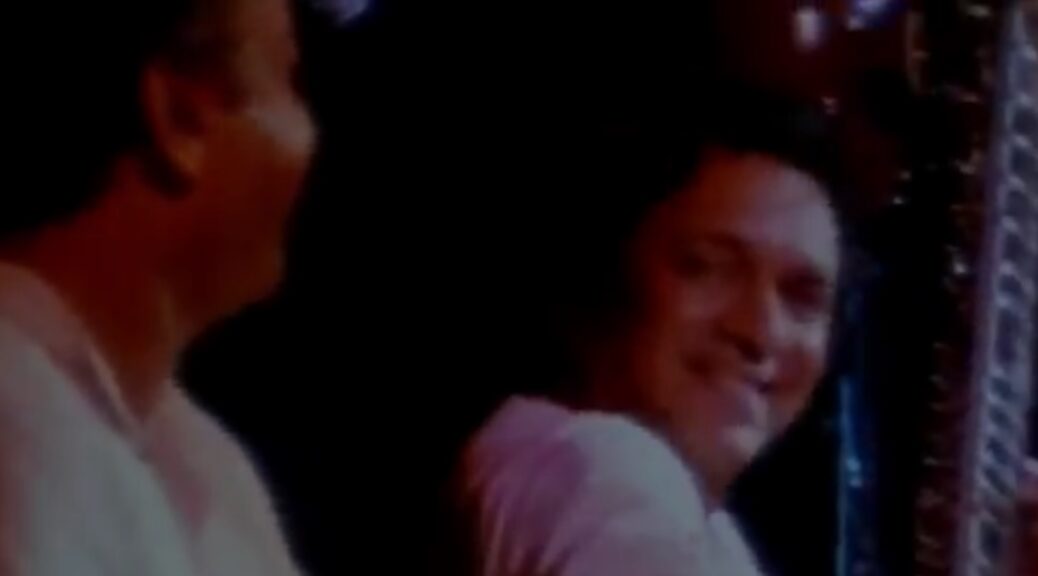 It was about 10 PM on Friday 15 August.  Drizzling heavily.

Why was there an Indian musician, albeit a famous Indian musician,  at a rock and folk festival? Why had Sri Swami Satchidananda  prayed over the jammed field after Richie Havens’s opening performance?

George Harrison had first picked up a sitar on April 5, 1965 while waiting to film a scene for their movie, Help! He felt something within him (and without).

He played it on Revolver’s very first cut: Norwegian Wood (This Bird Has Flown). George Harrison had  introduced Beatle fans to the Indian sitar and so much more.

On the 24 August 1967, less than a year later and nearly exactly two years earlier to Ravi Shankar at Woodstock, the Beatles met the Maharishi Mahesh Yogi for the first time.

Harrison’s use of the sitar and the Beatles initial casual meeting led the introduction of 1,000s of young Beatle fans to Indian music and transcendentalism.

Harrison’s interest in both led him to the study of the sitar under the most famous Indian sitar player. When asked why the Beatles weren’t at Woodstock, part of the answer is that they were certainly there in spirit.

As you could hear, Ravi Shankar was serious not just about playing his music, but about the listeners. He had asked photographers to stop.

According to a Huffington Post article,  he “called it a “terrifying experience”, where the stoned audience reminded him of “the water buffaloes you see in India, submerged in the mud”. He was so upset that he did not perform in the US for the next one year and a half.”

Shankar’s set is obviously not rock and roll nor folk. I suppose we can categorize it as world music, but to do so suggests we Westerner’s don’t know enough music to distinguish it more specifically than that extremely broad category that must include music that sounds nothing like Shanar’s Hindustani classical music.

Hindustani music is a whole other approach to rhythm. The tanarang.com site explains Raga Puriya-Dhanashri:

Raag Description: This Raag occupies very important place among evening melodies. It produces compassion and is emotional in character. It is very close to Raag Purvi, which employs both Madhyams.

In this Raag P M G M r G are the Raag Vachak notes. Following are the illustrative combinations of Raag Puriya Dhanashri:

Following the opening piece, Shankar turns his concert into a class. He introduces the instruments, explains how they are played, and what they are made from. I assume he’d told Maya Kulkarni  and Ustad Alla Rakha beforehand that he was going to do this as they each demonstrate his points as he speaks.

He also explains that their playing is mostly improvised and how their head movement, for example, are ways of communicating while playing.

Before Ustad Alla Rakha begins  Tabla Solo In Jhaptal Shanker continues to explain the music and how Rakha’s playing reflects speech and sounds.

The next day, Santana’s Afro-Caribbean collective percussion will wow the crowd, but on this evening one man did it all by himself.

Again the teacher, Ravi Shankar explains the next song. “Now you will hear an evening raga Manj Kmahaj.  This will be played in the style known as thumris which is a semi-classical style…very romantic and lyrical in nature and one has much more freedom this time playing different ragas or folk tunes.”

Wikipedia states: It utilises the shuddha (pure) form of Ni on the ascent, and the komala (flat) form of Ni on the descent, creating a key asymmetry in compositional and improvisational performance. This raga has been explored more in the lighter forms of Hindustani Classical Music such as Thumri, Tappa etc. Yet a few compositions in Dhrupad and Khayal are found as well.

It was around 11 PM when Shankar finished and there are still three more acts to follow. It was raining. MC John Morris had exclaimed to the still applauding crowd “The great Ravi Shankar. Let’s say a special thank you to a gentleman who played through the rain, who just kept playing.

And In an attempt at gallows humor, MC John Morris says, “I guess nobody’s thirsty anymore.” If there were any crickets nearby, that was what we would have heard.

But he changes tack and says, “I guess tonight we’ve been talking about a couple of people, the one thing I haven’t thanked is the nicest  finest audience aside from being the largest audience I’ve ever looked at in my life. Thank you very much. You’re a fine bunch of people.”

The next performance is by Melanie.