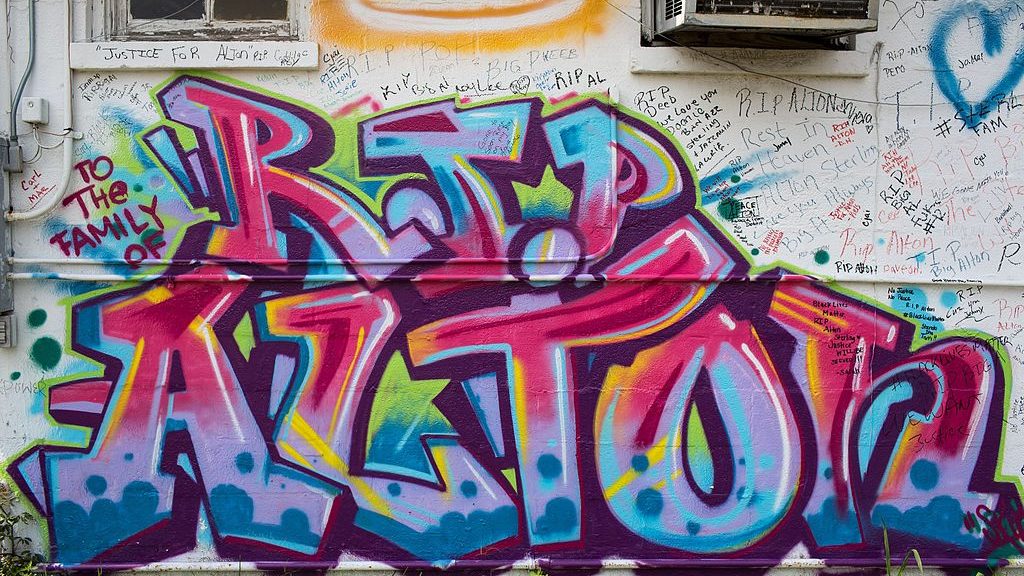 July 5, 2016: in Baton Rouge  officers (both white), Blane Salamoni and Howie Lake II responded to a report that a black man in a red shirt selling CDs outside the Triple S Food Mart had threatened the caller with a gun.

A cellphone video showed an officer pushing Alton B. Sterling (black) onto the hood of the car and tackling him to the ground. Sterling was pinned to the ground by both officers, one kneeling on his chest and the other on his thigh, both attempting to control his arms.

Saying that Sterling had a gun and was going for it, they shot him.

That same night, more than 100 demonstrators shouted “no justice, no peace”, set off fireworks, and blocked an intersection in protest.

An autopsy would indicate that Sterling had died from multiple gunshot wounds to his chest and back.

Quinyetta McMillon, the mother of Sterling’s eldest son, became very emotional when talking about her Stirling. The 15-year-old boy cried openly while standing by his mother’s side as she addressed the public.
Louisiana Governor John Bel Edwards announced  that the Department of Justice would launch an investigation.

Black Lives Matter held a candlelight vigil in Baton Rouge, with chants of “We love Baton Rouge” and, called for justice.

Also July 6, 2016: Philando Castile, a 32-year-old black American, was shot and killed by Jeronimo Yanez, a St. Anthony, Minnesota police officer, after being pulled over in Falcon Heights, a suburb of Saint Paul.

Castile was in a car with his girlfriend, Diamond Reynolds, and her four-year-old daughter when he was pulled over by Yanez and another officer.

Police identified the officers involved in the shooting and added that Salamoni has been with the force four years, while Lake had been with the department for three.

July 7, a protest was held in Dallas, Texas, relating to the shootings of Sterling and Castile.

The United States Department of Justice opened a civil rights investigation of the Stirling death.

Human rights expert Ricardo A. Sunga III, the Chair of the United Nations panel, stated that the killings demonstrate “a high level of structural and institutional racism”. Adding that “The United States is far from recognizing the same rights for all its citizens. Existing measures to address racist crimes motivated by prejudice are insufficient and have failed to stop the killings.” [RT article]

July 9, a protest in Baton Rouge turned violent, with one police officer having several teeth knocked out and eight firearms (including three rifles, three shotguns, and two pistols) being confiscated from New Black Panther Party members.

On July 10, between 30 and 40 people were also arrested including African-American Muslim activist Blair Imani.

July 11, 2016: President Obama placed a telephone call to the Sterling family to offer his and the First Lady’s condolences on behalf of the American people for the death of their loved one.

People gathered across Baton Rouge to participate in rallies, vigils and protests since Sterling’s death. A memorial has been growing in honor of Sterling outside the convenience store where the shooting happened.

On July 13, local organizing groups and the American Civil Liberties Union’s Louisiana branch, filed a lawsuit against the Baton Rouge Police Department for violating the First Amendment rights of demonstrators. They claim they were protesting peacefully against Sterling’s death.

Reverend Al Sharpton and Reverend Jesse Jackson were among the many speakers at the service.

“We must stop all the killing all the time. No one has the right to kill anyone,” said Rev. Jackson. “For those of you who are listening here and around the world, our strongest violence is not guns and violence. It’s the rightness of our cause.”

July 17, 2016: Gavin Eugene Long shot six police officers in Baton Rouge, Louisiana. Three died and three were hospitalized, one critically; of the officers who died, two were members of the Baton Rouge Police Department, while the third worked for the East Baton Rouge Parish Sheriff’s Office.

A SWAT officer killed Long during a shootout.

April 28, 2017, Mayor-President Sharron Weston Broome released a statement that a decision regarding possible federal charges was expected. She noted that no timeline had been released.

May 2, 2017:  the federal government announced that, officers, Blane Salamoni and Howie Lake II, the two white police officers in the fatal shooting on the July 5, 2016 of Alton B. Sterling, a black man in Baton Rouge, La would not be charged. The incident caused widespread unrest. State charges were still pending.

The wrongful death lawsuit alleged that the fatal shooting was indicative of racist conduct and excessive force by Baton Rouge police.

March 27, 2018:  Louisiana Attorney General Jeff Landry announced that police officers would not be prosecuted by the state authorities.

Landry’s statements were similar to the Justice Department’s May 2, 2017 findings and defended the conduct of the officers, saying, for example, that their efforts to gain control of Sterling’s hands were “well-founded and reasonable under the circumstances and under Louisiana law.” Landry also said the officers were justified in their concern about whether Mr. Sterling was armed.

March 30, 2018: Chief Murphy Paul of the Baton Rouge Police Department announced that Blane Salamoni, who fatally shot Alton B. Sterling was fired. Paul also announced a three-day suspension of Officer Howie Lake II, also involved in the episode. The disciplinary actions were the first serious consequences for the officers after both state and federal officials declined to bring criminal charges against them.

Inspired by a photo by Jonathan Bachman, Tracy K Smith, the US Poet Laureate,  wrote Unrest in Baton Rouge after, September 2017

​Our bodies run with ink dark blood. Or else

It pools in the pavement’s seams.

Is it strange to say love is a language

Few practice, but all, or near all speak?

Even the men in black armor, the ones

Jangling handcuffs and keys, what else

Are they so buffered against, if not love’s blade

Sizing up the heart’s familiar meat?

We watch and grieve. We sleep, stir, eat.

Skirt lifted by a different kind of breeze