Nearly all the 1969 festivals I’ve written about were two- or three-day events with several performers each day. I do have a piece on the 1969 Forest Hills Music Festival in Queens, NYC, even though it was a summer-long event because so many festival-type rock groups were part of it.

In 1969, Southern Illinois University initiated the Mississippi River Festival. Though primarily designed as a summer residence for the St Louis Symphony Orchestra (with Walter Susskind the conductor), [a la Tanglewood in Massachusetts featuring the Boston Pop Orchestra] the Mississippi River Festival regularly featured other types of music over its typical two-month (30 dates) run. Not quite the kind of weekend festival featuring several performers each day that typified the most other 1969 festivals, the MRF nonetheless featured many of the same performers who were at those festivals. 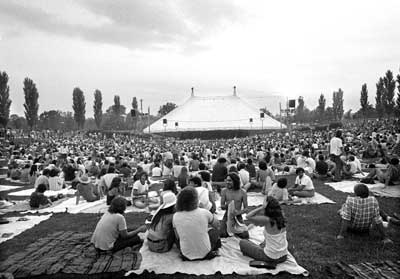 Organizers located the venue inside a custom-made circus tent with seating for approximately 1,900 guests.  The tent had one open wall to allow for lawn spectators.

Here is a 14-minute video which mostly covers the early organization of the inaugural season. It features mainly the orchestra.

Viewers might find it interesting and amusing to watch how formalized the MRF organizers were compared to those of Woodstock Ventures.  These organizers sit a table, coffee cups in front of them, men in jackets and ties, women dressed for “church.

Because it was a two-month season, attendees could purchase a season pass for every show available.

The St Louis Dispatch has a slide show entitled, “Glory Days of the Mississippi River Festival.“ 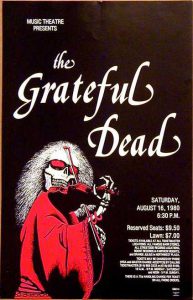 Over the 11-year run of its existence, many other great bands played the Mississippi River Festival, such as, Grateful Dead, the Who, Jimmy Buffett, Yes, Janis Joplin, the Flying Burrito Brothers (in 1970 with Gram Parsons), Joni Mitchell.

Below is a chart with the various rock- or folk-related groups that played in 1969. It is a great selection.

Dylan out of circulation?

Of special note is July 14. The Band played.  It is “common knowledge” that Bob Dylan did not perform at the Woodstock Music and Art Fair. And that is true. It is also common knowledge that Bob Dylan’s first public performance following his July 29, 1966 motorcycle accident was at the Isle of Wright event the end of August 1969. Common knowledge? Yes. Accurate? No.

Who came out to play with The Band on their 4-song encore? You guessed it: Bob Dylan. I think that qualifies as a public appearance, don’t you?

In their 2006 book , The Mississippi River Festival, Amanda Bahr-Evola and Stephen Kerber wrote: To host the symphony, the university created an outdoor concert venue within a natural amphitheater by installing a large circus tent, a stage and acoustic shell, and a sophisticated sound system. To appeal to the widest possible audience, the university included contemporary popular musicians in the series. The audacity of the undertaking, the charm of the venue, the popularity of the artists, the excellence of the performances, and the nostalgic memory of warm summer evenings have combined to endow the festival with legendary status among those who attended. [Edwardsville Intelligencer article about book]