Refused to give up bus seat 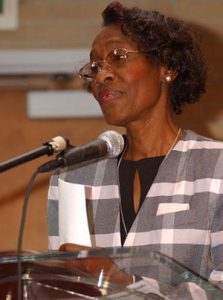 As unfair as it may sound, being historic sometimes depends on whether others think you can be historic. In other words, you may do something historic, but others feel that you do not look the part and thus your historic act is left to wither.

The right to chose a bus seat regardless of one’s race was not possible under the enacted Jim Crow laws of many states as well as the unspoken norms of most states. On July 16, 1944, 27-year-old Irene Morgan, recovering from a miscarriage and traveling by bus from Virginia to Baltimore for a doctor’s appointment, refused to give up her seat to a white couple.

Angered by the refusal, the bus driver drove the bus to the Middlesex County town of Saluda and stopped outside the jail. A sheriff’s deputy came aboard and told Morgan that he had a warrant for her arrest. She continued to refuse and police had to physically subdue her. Authorities jailed her for resisting arrest and violating Virginia’s segregation law.

Because interstate travel came under the auspices of the federal government, civil rights lawyers challenged Morgan’s later conviction. On June 3, 1946, in Morgan v. Commonwealth of Virginia, the US Supreme Court (6 – 1) ruled in favor of Morgan declaring that  segregated seating on interstate buses an “impermissible burden on interstate commerce.”

Few know the name Claudette Colvin, but on March 2, 1955 the 15-year-old Colvin boarded a city bus after school to head home. As it filled up, a white woman was left standing, and the bus driver ordered Colvin to get up and move to the back. She refused. Police dragged Colvin off the bus in handcuffs.

On October 21, 1955 police arrested 18-year-old Mary Louise Smith for violating segregation laws in Montgomery, Ala. She had refused to change her bus seat.

Her father bailed her out of jail and paid the nine-dollar fine. The incident was initially known only to family and neighbors. Nothing more was said or done about it.

Of course, most of us know that Rosa Parks, considered the godmother of the Civil Rights Movement, did the same thing on December 1, 1955. Parks certainly deserves that honored recognition.

On February 1, 1956, attorney Fred Gray and other attorneys filed a civil suit, Browder v Gayle in the US District Court, challenging state and local laws on bus segregation. Mary Louise Smith was one of the five plaintiffs. Others included Aurelia Browder, Claudette Colvin, Susie McDonald, and Jeanette Reese. Reese soon left the case because of intimidation.

Ironically, the case did not include Rosa Parks herself. Gray had made the decision to avoid the perception that the defendants were seeking to circumvent Parks’s prosecution on other charges. Gray ‘‘wanted the court to have only one issue to decide—the constitutionality of the laws requiring segregation on the buses’’

The women testified before a three-judge panel. On June 13, 1956 the court ruled that the laws were unconstitutional, based on equal protection under the Fourteenth Amendment.

Montgomery and Alabama appealed the case and eventually the US Supreme court took the case.

On November 13, 1956, the US Supreme Court affirmed the lower court’s ruling and on December 17, it declined an appeal by the city and state to reconsider, and on December 20 ordered the state to desegregate its buses.

Smith married a Mr. Ware and they had four children together. They later divorced. Smith Ware continued to work for civil rights such as for voting rights before the federal Voting Rights Act of 1965, and participated in the March on Washington in 1963. Her sister Annie’s son was a plaintiff in the lawsuit to desegregate the Y.M.C.A. Smith is active with her 12 grandchildren and great-grandchildren. She enjoys reading, and she is active in several of her church auxiliaries and senior citizen clubs. When Rosa Parks died in October 2005, Smith Ware, then 68, attended the memorial service in Montgomery. “I had to pay my tribute to her,” Ware said. “She was our role model.”

Here is a link to a 2013 Democracy Now piece on all these heroic women.

In the comments below, William Waheed refers to a YouTube video he  helped put together. It is called “More Than A Bus Ride Documentary”