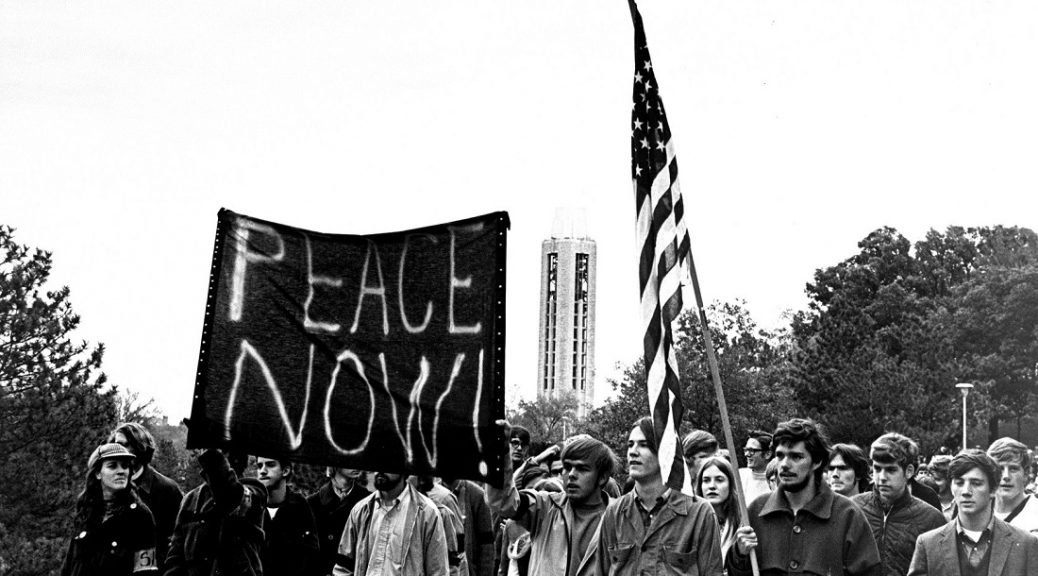 The organization initially focused its effort on 300 college campuses, but the idea soon grew and spread beyond the colleges and universities. Hawk and Brown were assisted by the New Mobilization Committee to End the War in Vietnam, which was instrumental in organizing the nation-wide protest.

Many felt that these organizers were unpatriotic. Before the event, Los Angeles Mayor Samuel W. Yorty described them as “loud, marching, foolish and subversive dissenters.”

President Nixon urged Americans not to “buckle under” or “run away” from a “fair peace.” Senate minority leader Hugh Scott (R-PA)  scolded protesters they encouraged the US to “cut and run” and capitulate to the enemy.

Keep in mind that in 1969 TV for most people meant only nine letters: ABC, CBS, and NBC. If you didn’t see something there it wasn’t important. None of those networks planned on live coverage of the October 15 National Moratorium.

Ben Kubasik, executive director of the National Citizens Committee for Broadcasting, said of the networks’ decision: What passes for the commercial networks’ news judgement astounds me. If a famous man had died, a manned moon space shot were launched, or President Nixon chose to go on the air to say he would be unmoved by the moratorium, those would have been carried alive. The Vietnam Moratorium is the greatest peaceful outpouring in our history and the networks choose to ignore it as it is happening by running regular programming.”

In New York City, as in many large urban areas, local electronic media did cover the event. For example alternate rock station WNEW-FM suspended all advertising for the entire day. WOR-TV devoted more than seven hours to coverage. WBAI-FM covered the event in its entirety.

Vietnam is 11 hours ahead of Eastern time and so when a group of 20 young Americans assembled in front of the American Embassy at 10 AM on October 15, 1969, the National Moratorium began.

In New York City, the New York Times  headline was that “Tommie Agee’s Bat and Glove Lead Mets to Second World Series Victory.” Baseball fans across the country would be able to see game four that night and watch the Amazin’ Mets take a 3 – 1 lead on its way to an improbable World Championship.

Across the United States over two million people in their own cities and neighborhoods held protests against the War. Some read names of the war dead in town squares, some churches tolled their bells for each of the dead. One of the largest demonstrations occurred when 100,000 people converged on the Boston Common. Walter Cronkite called it “historic in its scope. Never before had so many demonstrated their hope for peace.”

…and the beat went on…

On April 28, 1970, Nixon authorized U.S. combat troops to cross the border from South Vietnam into Cambodia.

On April 30 Nixon announced that invasion and the expansion of the war.

On May 1 protests erupted on campuses across the US.

On May 3 during a press conference, the Republican governor of Ohio, James A. Rhodes, called anti-war protesters “the worst type of people we harbor in America, worse than the brown shirts and the communist element.” Rhodes ordered the National Guard to quell a demonstration at Kent State University.

On May 6 hundreds of colleges and universities across the nation shut down as thousands of students join a nationwide campus protest.

Vice-President Spiro Agnew stated, “We have listened to these elitists laugh at honesty and thrift and hard work and prudence and logic and respect and self –denial. Why then are we surprised to discover we have traitors and thieves and perverts and irrational and illogical people in our midst? On May 8 about 200 construction workers in New York City attacked a crowd of Vietnam war protesters. Some workers use pipes wrapped with the American flag. More than 70 people were injured, including four police officers. Peter Brennan, head of the New York building trades, was honored at the Nixon White House two weeks later. He later became Secretary of Labor.

On May 15 in Jackson, Mississippi police confronted a group of student protesters. The police opened fire, killing two students.

On May 20 around 100,000 people demonstrated in NYC’s Wall Street district in support of the war.