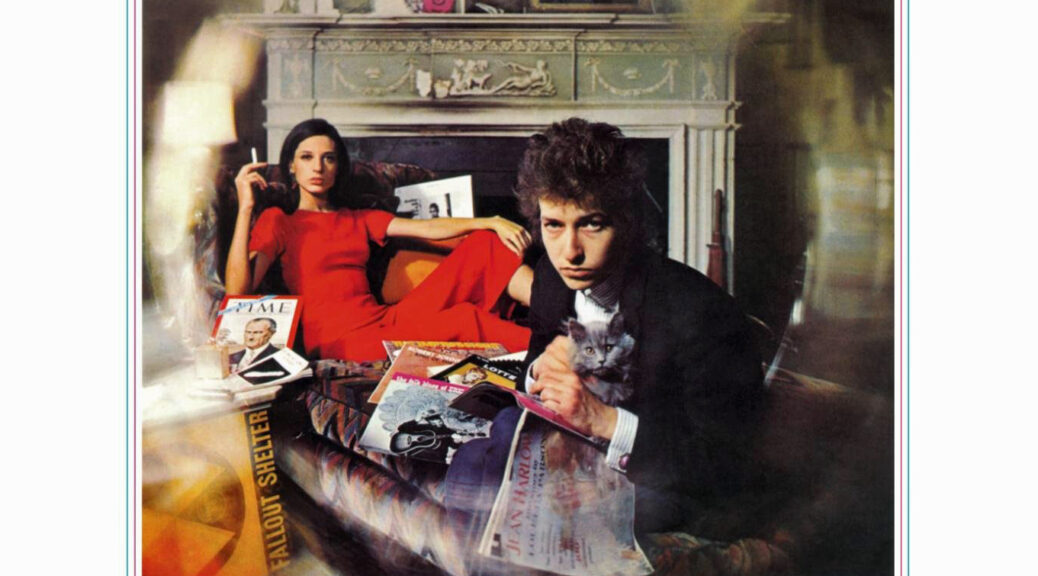 Wives of the famous are often known but rarely memorialized. Sally Grossman was an exception. In 1965, Columbia Records released Bob Dylan’s fifth album, Bringing It All Back Home.

The album is iconoclastic because until the album, Dylan’s recorded music had reflected his acoustic folk songs.  Bringing It All Back Home‘s featured one side of electric and fan blowback was both enthusiastic and damning.

His famous/infamous 1965 Newport Folk Festival appearance was a fork in the road for his fans. Many departed booing.

In 1965, there was no instant way of discovering who the lady in red (smoking literally and likely figuratively for many) was. It is Sally Grossman, the wife of Bob Dylan’s manager, Albert Grossman.

Whether an actual attendee or simply a fan of 1969’s Woodstock Music and Art Fair, the cover’s location is more important than one might realize.

The room Grossman and Dylan sit in is the living room of Sally and Albert Grossman’s Woodstock, NY country home. The Grossmans regularly invited Dylan to their upstate retreat for its beauty, serenity, and isolation.

So enamored with the area, Dylan moved there with his family.

Thus a connection formed between Dylan, arguably the single most important person in rock music at that time, and a little town in upstate New York.

Four years later when Michael Lang, the latest hippie arrival,  considered locating a recording studio there, but that idea morphed into a festival, there was no question in his mind what the name of that festival would be: the Woodstock Music and Art Fair. As many still continually discover, Bethel, NY,  was the actual site of that festival and not close by: an 90 minutes and 60 miles of backroads away.

Sally Buehler was born in Manhattan, grew up in Queens. While attending Hunter College  she often, as so many did, hung out at the Village, a 20 minutes subway ride away.

From a theband.hiof.no article: “I used to see Albert Grossman around the Village back when I was still a student at Hunter College in the beginning of the 60s. Everybody knew everybody else on the street at that time. It was incredible. The folk music scene was starting to happen, the beat poets were all around.

“Soon I figured that what was happening on the street was a lot more interesting than studying seventeenth-century English literature, so I dropped out of Hunter and began working as a waitress. I worked at the Cafe Wha?, and then the Bitter End, all over.

“I had real upward mobility as a waitress… Back then Albert never even said hello to me. He was too purposeful, too busy.”

He did start to say hello and though Albert was 13 years older, they married in 1964.

Also from the theband.hiof.no article article: “The years between ’64 and ’70 were a total blur. Our life was incredibly intense. Every night about thirty of us would meet at Albert’s office on 55th Street to go out. The office was constantly packed with people — Peter, Paul and Mary, of course, but also Ian and Sylvia, Richie Havens, Gordon Lightfoot, other musicians, artists, poets… Then there were tours to England and Europe, command performances for the Queen and then the move to Woodstock [in 1963].”

Woodstock, NY is a two hour car ride north of Manhattan and a different world.  Given the anti-mainstream zeitgeist of the 1960s, the area was idyllically located.

There are many stories about how Albert Grossman began to treat his stars badly, often entitled to more of the earnings than they felt were his due. There is the assumption that Janis Joplin’s death in 1970  affected him, he lost interest in the job. Of course, working with artists is never an easy task.

After Albert’s death from s heart attack on a flight from the United States to Europe in 1986, Sally carried on his legacy by overseeing his legendary studio Bearsville which also had had the Bearsville Records label.

She also took on Albert’s dream project: turning a barn into a theater. As she told it, she had no choice…zoning laws in Woodstock were about to change, making it impossible to open a music venue in the future, so she was forced to take on the project earlier than she thought. The Bearsville Theater opened in 1989; Grossman sold it in 2004.

In the 60s, Sally Grossman had discovered an order of religious singers from Bengal known as the Bauls and became enamored with their music.

From her NY TImes obituary:  She created a digital archive of Baul music. Deborah Baker, author of “A Blue Hand: The Beats in India” (2008), wrote about Ms. Grossman and her connection to the Bauls in a 2011 essay in the magazine the Caravan.

“Despite all the famous musicians and bands who once passed through her life,” Ms. Baker wrote, “she found it was the Bauls she missed the most from those years.”

Author Neil Gaiman wrote about Grossman’s passing: “I’m sad to hear that Sally Grossman has passed away. She was funny, salty, sometimes grumpy (but I think she liked me) a smart businesswoman and a fount of stories. No more lunches at the Little Bear.

“The couch (her wedding present from Mary Travers) is empty now.”